WHERE TO STAY IN NICE, FRANCE 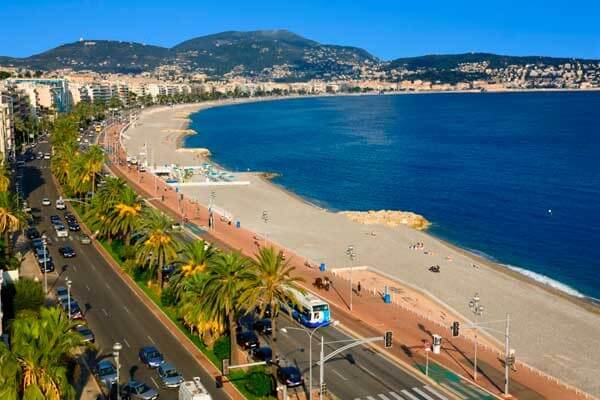 Where is the best area to stay in Nice?

The best area to stay in Nice is the famous Promenade des Anglais in the city centre due to the majority of tourist attractions being found here or that are located very close by. This area contains some of the most famous museums in the city as well as gardens, beaches and some of the best views of Nice from the famous Promenade. The centre is easily accessible wherever you are in the city and this is where the highest concentration of hotels, bars and restaurants are based.

Nice becomes more popular by the day and is a favourite for all ages, be it young or old, as there are things to see and do whatever you prefer. The city is well known for its superb views from the waterfront over the Mediterranean Sea as well as being a culturally diverse city. The city welcomes all walks of life with open arms and the people are some of the nicest in the country and this may well be down to the 300 odd average days of sun that Nice receives. The city boasts lots of architectural buildings as well as museums, beaches, parks, shopping and an excellent range of nightlife.

On the map, which shows the most convenient area to stay in Nice, you can see a selection of some of the best located hotels.

The Promenade area in the city centre, the best area to stay in Nice Nice is a particularly easy place to navigate yourself around with the city being very tourist friendly with an extensive range of signs and maps that are dotted all around the city centre and if not the Nice people will be more than happy to help you find your destination. The city centre is relatively relaxed and is one of the safest neighbourhoods in the city as well as being very well connected to all parts of the city like the airport and Old Town (Vieux Nice), which makes it particularly appealing for visitors.

One of the first things that tourists like to do when visiting the city is heading straight down to the Promenade des Anglais, which starts by Vieux Nice and takes you all the way south to the airport. This long path offers many things to see and do including various beaches, however most beaches aren’t sandy and are mostly full of large stones, so it would be best to take shoes and some form of padding though it is possible to swim and sunbathe still.

There are also numerous bars, restaurants and shops dotted along the waterfront, which do get busy during sunset and after hours. One of the main areas of the promenade is the Colline du Chateau, which is a park that hosts the ruins of a 12 th century castle and though there isn’t much to see in terms of the castle, the views over Nice and the harbour are a must as you are 90 metres high up. Another popular place along the waterfront is Parc Phoenix, which is home to a botanical garden that displays 2500 species of plants as well as some wildlife.

Other things in the city centre include the Museum of Asian Art, which showcases spectacular work from artists from this continent including Chinese, Japanese and Southeast Asian painters, sculptors and other various art forms. The Beaux-Arts Museum is another highly-praised museum and is where you will you see many 19 th and 20 th century pastels that were produced by Cheret, Monet, Rodin and Dufy.  The city centre is also home to the Orthodoxy Cathedral, which is one of the most beautiful of its kind outside of Russia and is easily recognised with its collection of ornate onion-shaped domes.

The main shopping street is Jean Medecin Avenue and this is one of the most popular areas of the city, which is where you can check out street shops as well as various shopping malls and you can pick up books, games, films, designer clothes, food and much more. The same area is excellent for going out in as there are plenty of restaurants, pubs, clubs and hotels in the area, however if you have the money to spend, nothing beats the waterfront for these facilities.

Other neighbourhoods to stay in Nice This is the Old Town and therefore has some of the oldest buildings in the city, which makes it a pleasant stay if you decide to pick this safe neighbourhood as it also in walking distance of the promenade and city centre too. The area is full of narrow streets and alleyways, which form a maze and wherever you stroll in the Old Town, you will want to take many photos due to the picturesque French houses with typical hanging flowers and iconic shutters.

One of the major highlights is the Palais Lascaris, which is a fine 17 century medieval mansion and is the only one open to the public. You will see how people lived in their status with huge spacious rooms, suits of armour, frescoed ceilings and much more. The Old Town is also home to various markets with the Cours Saleya being a decent one to check out, which is a colourful and beautiful flower and fruit market. There is also the Museum of Modern and Contemporary Art and just like the title suggests, there are modern and contemporary pieces of art as well as offering a brilliant rooftop view of Nice. The main strip for restaurants, bars, shopping and hotels is the Rue des Ponchettes as well as the streets that surround it. The Old Port is funnily enough right next door to the Old Town, which is only a few hundred metres away, as is the promenade and therefore is a very popular and safe area. The Old Port has a vast array of hotels, restaurants, pubs and shops that surround the docks and there are many boat cruises that take you along the coastline as well as out to sea.

The train and bus station are close by and the airport is easily accessible from the port.