WHERE TO STAY IN UBUD 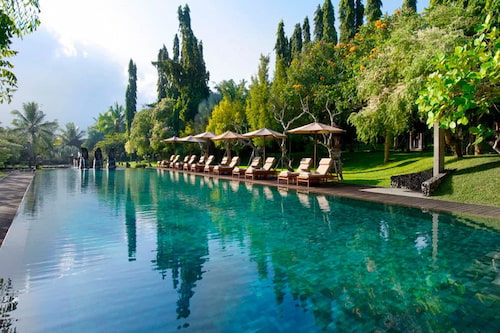 What is the best area to stay in Ubud?

Ubud is the complete opposite of the beach party scene that Bali much resembles and this city is of particular interest to tourists as it is rich in Balinese culture and has beautiful surroundings. Many people come for a week or longer as there is a lot to see and do including dance and music shows, temples, markets and more.

Ubud has joined up to neighbouring villages due to its growth and many of these produce handicrafts, shows and art galleries. There is no better place to experience Bali life than Ubud and especially as its people are so incredibly proud of their home’s heritage, meaning you can experience the true happiness of the island.

The best area to stay in Ubud is the city centre as this is where the tourist area is located, and it is a very safe neighbourhood. You can stay at one of the many authentic hotels in the centre and easily get around on foot from there, with the main streets being JI Raya Ubud, JI Hanoman and JI Monkey Forest. The neighbourhood offers various tourist attractions, a huge selection of shops, stunning art galleries, peaceful cafes and entertaining nightlife.

On the map, which shows the best place to stay in Ubud, are located a selection of the best hotels according to the opinions of Tripadvisor users. By passing the cursor over the icons, you can see the exact address of the hotel and the link where you can make a booking. Best Location Hotels offers a selection of the best-rated hotels, located in the best area to stay in Ubud, Bali, and also provides the link to the hotels for information and booking.

City Centre, the best area to stay in Ubud Generally Ubud is quieter than most places on the island of Bali, as the streets are a lot calmer and the vibe is a little more relaxed, which pays dividends for tourists. However, don’t be fooled into thinking that this area has no traffic, as it certainly has a lot of congestion, involving both vehicles and people. This area is well connected to the rest of Ubud with various buses and taxis, as well as bemos, which all serve the Denpasar International Airport. The city centre is also the safest neighbourhood in Ubud as there are many tourist police around, although the crime rate is generally very low.

The great thing about staying in the centre is that your hotel will only be a short distance from many tourist attractions as well as restaurants, bars, cafes and shops and all certainly within walking distance. Another brilliant way of getting around, especially if you have less time in Ubud, is renting a bike as there are many footpaths and roads that you can safely travel on, making it easy to reach traditional villages, temples, bamboo forests and see some excellent sights that surround the city. One of the major highlights in the city centre is the Ubud Royal Palace, which is regarded as the main iconic landmark of Ubud and has been here since the turn of the 19th century.

Here, you will see some of the best-preserved Balinese architecture as well as some of the most impressive gardens in the city. There are quite a few temples to see in the city centre with the best being Pura Kehen, which is one of the most attractive temples and was founded some 800 years ago and therefore displays some of the earliest Balinese architecture. There are many excellent museums and art galleries to check out too, with the Museum of Fine Arts hosting various brilliant exhibitions on Balinese traditional and modern art and the Bali Centre, which has different floors that explain a range of subjects from the history of the island and the city itself to art, photos and films that have been produced here.

On the fringes of the centre is the Ubud Monkey Forest, which is where you can see many macaques and is used for scientific research as well as tourism. Don’t be surprised to see one of these furry animals coming right up to you and trying to snatch something that belongs to you, so it is best to stay alert. There is also a variety of cooking classes, spas, massages, and cultural performances on offer, which take place mostly at night and the most famous sites to host these events are the palace and Puri Saraswati.

For shopping, a must see is the Ubud Market, which sells all sorts of items like souvenirs, clothes, food, jewellery, handicrafts and much more, though there are plenty of shops dotted around the centre too. The three main streets that were mentioned previously are the best for hotels, pubs and restaurants, which will please any tourist.

Other neighbourhoods to stay in Ubud This is a village that is just outside of Ubud and is best known as an artist’s village and is very much a working one, which sums up this particularly traditional Balinese area. The village is surrounded by beautiful rice fields, bamboo forests and tropical gardens, which are ideal for taking photos.

The area is easily reached from Ubud with buses, bemos and taxis available to take you there and Penestanan is a very safe area to stay in. There are also many art galleries, markets, cafes, restaurants and traditional Balinese style hotels, which offer a peaceful night´s sleep. This village is located just south of Ubud and there are frequent buses and bemos to this area, which is relatively similar to that of Penestanan, as it is a very safe neighbourhood to stay in, with lots of art on display at many art galleries, as well as jewellery making.

The Pura Puseh Batuan Temple is located here and is one of the most notable landmarks in the village, dating back to the 11th century and clearly influenced by Indian architecture. There are a good amount of places to stay here, as well as traditional restaurants, markets and shops to explore.