WHERE TO STAY IN BOSTON 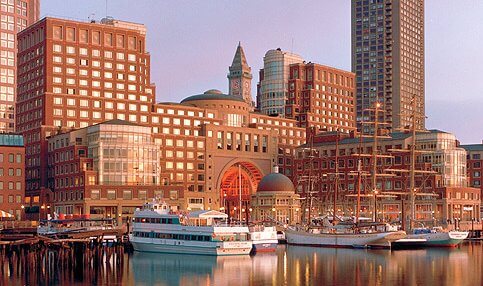 Where is the best area to stay in Boston?

One of the oldest cities in the United States and the capital of the state of Massachusetts, Boston is famed for its historic gems. The city is home to The Freedom Trail, a fascinating history walk that tells the story of the American Revolution through 16 historical sites. The city boasts an excellent selection of museums, including the Museum of Fine Arts, the John F. Kennedy Presidential Museum and the Boston Tea Party Ships & Museum. A walking tour will take you past sites like the beautiful Boston Public Garden and the Boston Public Library. Sports fans won’t want to miss seeing the Red Sox play at Fenway Park, a ball park that dates to 1912. Just across the river Charles, the (separate) city of Cambridge is home to two of the highest-rated universities in the world, Harvard University and MIT (Massachusetts Institute of Technology).

Two of the best areas to stay in Boston are the Back Bay neighborhood and the Downtown district. In Back Bay, you’ll see some fine examples of Victorian architecture and be able to do some fantastic shopping on Boylston Street and Newbury Street. You’ll also be close to attractions like the Boston Public Library and Fenway Park.

In the Downtown area, you’ll be close to the Freedom Trail and the many historical sites it includes, for example Boston Common and Old North Church. These areas are well connected by the “T” system (the Boston subway) and public buses.

Downtown and Back Bay; the best areas to stay in Boston For those who want to be at the heart of the action when staying in Boston, the Back Bay area is an excellent choice. Here, you will find a wide range of sights, attractions and activities that will leave you with a bulging itinerary. Once a busy shipping bay, the area grew to become one of the city’s most exclusive and expensive neighborhoods.

Getting around Back Bay is easy, as there are excellent public transport links. The area is particularly well known for its architecture, which includes Victorian brownstone houses that are amongst the best preserved examples of their kind throughout the country.

The area houses a number of well-known Boston institutions and public buildings, including the Boston Public Library. There is also a strong cultural scene, with a number of exciting annual festivals that reflect the diverse culture of the area. If you enjoy shopping, you will love Back Bay, as there are plenty of excellent and trendy shopping facilities to enjoy on Newbury Street, Boylston Street, in the Prudential Centre and at the Copley Place mall.

Back Bay hosts many hotels.  You can easily find accommodation to suit your needs and your budget, with everything from low-cost accommodation, to boutique hotels, to luxury chains. Some of the tallest buildings in the city can also be found in this area, which includes the Hynes Convention Centre, named after a former mayor of Boston, John Hynes. You will find a range of other fascinating buildings to explore: the Old South Church, John Hancock Tower and 111 Huntington Avenue among them.

Staying in this particular part of the city will enable you to enjoy staying in one of the most desirable neighbourhoods in the city and the country, with its trendy vibe, great facilities and attractive buildings.

Hotels in Back Bay Boston’s financial and business hub, Downtown is another neighborhood where you will find numerous hotels that cater for a wide range of needs, budgets and preferences.  Businesspeople and tourists alike appreciate its dynamism. It houses an eclectic mix of business facilities, public institutions, shopping facilities, entertainment and attractions, making for a diverse and exciting experience for any visitor.

With its good transport links, Downtown is easy to get around and explore. It has a wide range of shopping facilities, perfect for those looking for some retail therapy. You’ll find everything from huge departments stores through to unique and exclusive boutiques. There are many places to dine out, with restaurants and eateries that offer a choice of local and international cuisine.

When it comes to attractions and places of interest, Downtown will keep you busy. There is something for everyone, including a variety of architectural, historical and cultural places of interest, such as King’s Chapel, the Norman B. Leventhal Park at Post Office Square, Old City Hall, Old State House and St. Anthony Shrine. You can explore some of the city’s most historical and fascinating landmarks by following the popular Boston Freedom Trail, which attracts millions of visitors each year and stretches for two and a half miles.

If you enjoy a vibrant nightlife, the downtown area has some strong points. You will find everything from relaxing bars and lounges to buzzing nightclubs that provide music and entertainment into the early hours. There are cinemas for the movie buffs and theatres for culture vultures looking to take in some great stage performances.  Downtown houses the famous Boston Opera House, the Modern Theatre and the Orpheum Theatre.

Other areas to stay in Boston The historically Italian neighborhood of the North End is a relatively safe area of Boston. In this this splendid area you can visit many landmarks, such as the Paul Revere House, Pierce-Hichborn House, Union Wharf or St Stephen’s Church. Hanover Street is the main street, filled with eateries like Bricco, Mike’s Pastry and Caffe Vittoria.

The small streets of the North End amplify noise, which does not make for a quiet stay, but what North End lacks in quiet it makes up in atmosphere. If you want to escape the noise, the Battery Wharf Hotel is a haven. Haymarket and Government Center are train stations close to the North End, which can connect you to shopping centers such as Cambridge Side Galleria, or to Logan International Airport.

Beautifully constructed Victorian houses line the streets of the South End. The quietness of Peters Park and the Blackstone Park make this a great place to stay. The South End is home to many clinics, which care for homeless and rehab patients. Staying south of Washington Avenue is a good idea for tourists. Shawmut Avenue and the SoWA Open Market are great places to shop for gifts, fresh food and more. You can easily walk to Back Bay or Chinatown from the South End. The Silver and Orange Lines of the train station give you easy access to other parts of Boston. South Boston, also known as Southie, is the original neighborhood of many Irish immigrants to Boston. Nowadays, it welcomes a diverse group of races and nationalities that mingle together. The best place to stay in Southie is Boston’s Seaport Hotel, a stunning location by the water and in close proximity to restaurants and shops. Sullivan’s Castle Island, a remarkable landmark restaurant that has been family-owned since 1951, offers the typical New England fare of lobster rolls and clam chowder.

The closest T line that stop near South Boston is the Red Line, but Uber is a safer choice when traveling at night. Southie is very animated at night, but if you want to avoid busy or drunken crowds, you can head to the Seaport District for a less hectic night out.

This student village is home to the famous Boston College and Harvard Business School. Other must-see stops in this area are Union Square, Oak Square and McMullen Museum of Art. Public transportation is easy with the Green Line (B-service) which takes you to Washington Street, Packard’s Corner or Chestnut Hill Avenue. If you are after magical supplies or unconventional gifts, check out Ritual Arts at 153 Harvard Avenue. The area is less safe at night than Downtown or some of the more residential parts of Boston. Beacon Hill is redolent with historical landmarks, such as Boston Common and the Massachusetts Statehouse. Given its close proximity to the Statehouse, most of the area is safe to visit at all times, except for Boston Common, which is best avoided at night. Places like the Sevens Ale House and Beacon Hill Pub are perfect spots for happy hour.

After Happy Hour and dinner in one of the areas good restaurants, head over to Guilt, 6B Lounge or the Icon Nightclub to dance the night away. The Beacon Hill Hotel & Bistro and Found Hotel Boston Common are comfortable and affordable hotels in Beacon Hill. The closest “T” stations to Beacon Hill are Tremont Street, Beacon Street and Park Street, which give you access to the Logan International, shopping centers and cinemas.

The Emerald Necklace of parks is one of the famous landmarks in Jamaica Plain, which includes Jamaicaway and Jamaica Pond. Forest Hills Station also welcomes you to other areas in Boston, such as Jackson Square and Hyde Park. The Tres Gatos is an original restaurant that doubles as a tapas bar and bookstore. Jamaica Plain is not considered the safest area in Boston, so at night it’s best to travel in a group or get a Uber. Charlestown is the oldest neighborhood in Boston. The Interstate 93, Route 99 and US 1 give visitors access by car or bus to Charlestown. The MBTA’s Orange Line serves many parts of the area and provides easy public transportation to the airport, Faneuil Hall and Quincy Market.

Although there was once a Charlestown State Prison, it has been converted into the Bunker Hill Community College. This area is moderately safe for visitors who want to enjoy a trip to the Bunker Hill Monument or Charlestown Navy Yard. The Constitution Inn is an affordable and safe place to stay and offers services from Boston’s YMCA such a yoga, sauna and a basketball court.

Fenway Park, home to the famous Boston Red Sox baseball team, may be the oldest ballpark in the USA, but it is not the only attraction in the Fenway/Kenmore area. Boylston Street – which starts in Fenway and runs through Back Bay - is home to the first restaurant opened in a former gas station, Tasty Burger. Shopping at the Van Ness Building gives you the pleasure of boutique-style shopping as well as urban shopping at Target. Other landmarks in this area are the New England Conservatory and Fenway Studios. There are plenty of transport facilities that lead to and from FenwayKenmore: the Green Line T station has connections to Government Center, the John F. Kennedy Museum and more. At night, the crowds in this area can get rowdy, with drunk college students taking over the streets and pickpockets lurking around, especially during a Red Sox game. Apart from these downsides, the area is safe.