WHERE TO STAY IN CHICAGO 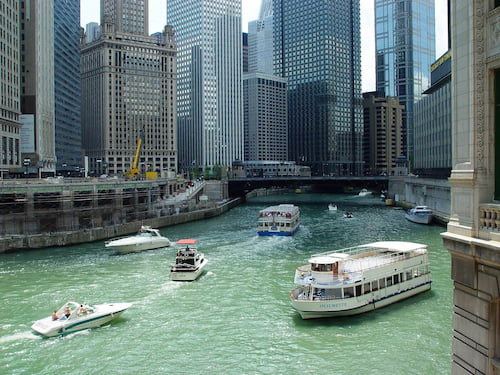 Where is the best area to stay in Chicago?

The so-called Windy City offers a thrilling array of towering sky scrapers, eclectic eateries and excellent cultural activities, all on the edge of the magnificent Lake Michigan. See the work of famous artists at the renowned Art Institute of Chicago, or head to the 360 Observation Tower for panoramic views over the city’s rooftops. Stroll along the waterfront of Millennium Park and see the modern sculptures, including the otherworldly reflections of Cloud Gate. As the sun sets, take in the city’s skyline from one of the many boat cruises running along the river. By night, enjoy a theatre or comedy show or one of the city’s excellent jazz and blues bars.

The best areas to stay in Chicago are the central areas of the Chicago Loop and the Magnificent Mile. Located on either side of the Chicago River, these areas offer the best of the city’s shopping, dining and sightseeing options. In Chicago Loop you’ll be close to major attractions like Millennium Park, the Art Institute and the famous Willis Tower, the highest building in the US. At Magnificent Mile, you’ll be close to the Museum of Contemporary Art and the scenic Lakefront Trail. The Loop is Chicago’s most accessible neighbourhood with public trains and buses as well as the Amtrak, Metra and South Shore lines.

On the map, which shows the most convenient area to stay in Chicago, you can see a selection of some of the best located hotels.

Chicago Loop and Magnificent Mile, the best areas to stay in Chicago The area of the Chicago Loop happens to have some of the most iconic architecture and most popular attractions in the city. The Willis Tower, previously known as ‘Sears Tower’, use to be the tallest building in the world but is now only in the country, which gives gobsmacking views from its Skydeck that extends out to a transparent balcony called ‘The Ledge’, 1,353 feet up above the streets beneath you. Other particular tall famous skyscrapers in the area include: Aon Centre, 311 S Wacker Drive, Aqua and Chase tower, which all contribute to the recognisable skyline.

The Art Institute of Chicago is one of the largest museums in the US, which is based on Impressionist art and is one of the best collections of its kind. The Loop is also home to the main park, ‘Millenium Park’, which has plenty of space to chill and watch the world go by as well as seeing the various sculptures with Cloud Gate being the most famous. The park is also home to the Pritzker Pavilion, which is largely used for concerts and festivals with many of them taking place in the summertime. The Chicago Cultural Centre is a magnificent building, which is a topped with a uniquely-built 38 foot Tiffany glass dome and the centre is used for various exhibits and galleries as well as having permanent ones.

The Loop is a great place for going to the theatre as there are many to choose from and the most famous is the iconic Chicago Theatre, which hosts various high-profile events like comedy nights, plays and musician performances. Other famous theatres include The Auditorium Theatre, Cadillac Palace Theatre and Chicago Symphony Orchestra with performances happening every night.  There is also a lot of shopping to be had as there are quite a few department stores and jewellery lovers will be heaven here.

There is an excellent range of restaurants in the neighbourhood that provide foods from all over the world and Adams Street is notorious for its luxury restaurants. The bars and clubs are all upmarket and this is due to the area being expensive to rent, but this means that these places serve the best drinks in the most extravagant of areas. Most accommodation in the Loop is understandably in the top range with the majority having five-star facilities like indoor swimming pools, gyms, bars and restaurants. Magnificent Mile is one of the most popular and largest shopping areas of Chicago, where you can buy all sorts of items and objects from various department stores and centres. This area has lots of nightlife, restaurants and is even home to some of the tallest buildings in the country like the Trump International Hotel and the John Hancock Centre. One major attraction along the mile is the Water Tower, which is of significant importance as it is perceived as a symbol of Old Chicago and was one of only a few surviving buildings after the Great Fire of Chicago in 1871.

As well as the shopping there are a lot of things to see and do in the area with dozens of museums and galleries to find. The best museums are the Museum of Contemporary Art, The Driehaus Museum and Chicago River Museum, which all have interesting and informative exhibitions. You don’t have to walk far to see an art gallery as they are all dotted over the area with most of them named after an artist, which promote American, Asian, African and European art. There are also a good number of theatres and cinemas located around the mile as well as on it. The Navy Pier is not far from the Magnificent Mile and is a major attraction for all ages, which comprises of theatres, cinemas, an amusement park, boat cruises and lots of restaurants that are set on a huge pier.

There are millions of restaurants to pick from with the area being well-known for its cuisine and many celebrities come here to dine. On the menu you will find anything from French, American, Italian, Korean, Japanese, Chinese, Brazilian and plenty of other specialities to whet your appetite. After eating, head to one of the many jazz clubs or taverns, where you can pick up some of the best cocktails in the city and listen to live music. There are heaps of hotels in different budget categories, which means there is something for everyone.

Other areas to stay in Chicago

Besides The Loop and The Magnificent Mile, here are 8 other areas in the city to stay during your trip to Chicago. No matter where you stay, there is a train system known as the El (Elevated Tracks), and bus systems, that will get you wherever you need to go in and around Chicago. This area on the north side is one of the best neighborhoods to stay in while visiting Chicago. Lincoln Park has so much vibrant culture and diversity within its boundaries. There are cafés and boutique shops everywhere and plenty of places to stay.

Gardens and greenery are all around in this neighborhood so go check it out especially during warmer weather when everything will be in bloom or the Lincoln Park Conservatory and botanical garden that is open and tended to year-round. There is also the famed Pizza and Oven Grinder Company, DePaul Art Museum, and The Apollo Theater in this popular community.

There are plenty of hotels and attractions all over Hyde Park located on the south side besides just themain streets bustling at it heart. Not only is it the former home of the 44thPresident of the United States, Barak Obama, but it also has the University of Chicago and the Museum of Science and Industry within its borders. It is located in a historic old neighborhood with one of the main attractions also being a Frank Lloyd Wright house called the Robie House, and the world’s first nuclear reactor, Chicago Pile-1.

Logan Square has a lively downtown area with plenty of bars and restaurants at an affordable price. The Old Town School of Folk Music also has a campus right in the square with plenty of workshops and shows going on year-round. Besides that, there is a branch of the Chicago Public Library and a large number of churches in the area. Logan Square is also part of the sprawling park system in the city known as the 606 so there is greenery everywhere and certainly worth checking out. These smaller side by side neighborhoods are two of the most notable up and coming areas in Chicago not only with the amazing restaurant scene happening there but also with the flourish of creatives who reside there and the many art galleries in the area.

The elegance of the central areas here is evident in the beauty of houses and accommodations. There is a variety of festivals and events held in Wicker Park and Bucktown throughout the summer including food festivals, and movie nights in certain parks. The incredible atmosphere of this community makes it well worth a visit.

This neighborhood is the home of Wrigleyville and the Chicago Cubs, so you couldn’t pick a better neighborhood if you’re a fan or want to attend a game in the summer. There are also the areas known as Northhalsted, Boystown, and the Belmont Theater District within its boundaries.Everything in this area is centered around the ballpark adjacent to the Theater District. During the day this north side area is tame and quiet however at night, the bars all along Clark St and Addison Ave are bustling with locals and tourist alike. If you want to experience the nightlife to its fullest in Chicago, this is the place to be especially at the bars and theaters along Belmont St.

This beautiful north side neighborhood is most notably home to Loyola University of Chicago. There is also a regular farmers market and the Chicago Comedy Film Festival holds events here at The New 400 Theaters. The beaches in Rogers Park are also second to none in the city with miles of beautiful shoreline on the north end of the city. There is also and Artist of the Wall Festival that has been going on for over 20 years and is the longest festival in the history of the city. Art and culture are central to the beautiful Rogers Park area which can be seen as a gateway south into the rest of an amazing city.