WHERE TO STAY IN MARRAKECH 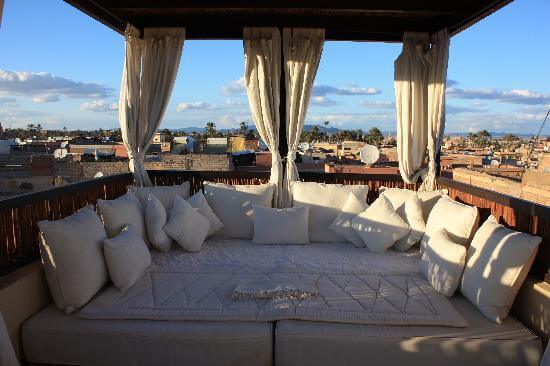 What is the best area to stay in Marrakech?

Marrakech means the “Land of God”, which is perfectly acceptable once you take in the sublime and graceful scenery of the landscape that sets the city at the foothills of the daunting Atlas Mountains. This is the third largest city in Morocco and has heaps of historical and cultural things to do and see with some of them particularly iconic which you will recognise as well as symbols of the country.

Without a doubt, the best area to stay in Marrakech is the old and historical district of the city, the Medina. When you think of Morocco this is what you will assume with the main square, Djemaa El-Fna, being the focus point and is where everyone congregates to see the bustling and endless souks, snake charmers and many other performers and people offering services. The majority of the tourist attractions are in close distance and after have a drink on one of the many rooftop cafes that surround the square and really take in this spectacular authentic view before dining in one of the traditional Moroccan restaurants. There is no shortage of hotels in the area and a Riad, a traditional Moroccan house, has to be tried once and like the saying……when in Rome…..

The Medina, the best area to stay in Marrakech 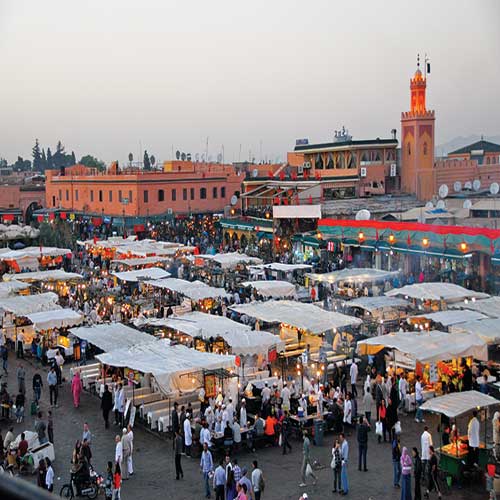 Obviously the thing you will want to do is head to the world-famous central square of the Medina, Djemaa El-fna, which is has been used in countless TV programmes and films. Here you will experience the true Moroccan vibes and feelings, where everything is happening at a thousand miles an hour.

People shout frantically to sell you any items they have on their stall, whilst people run and cycle into small empty spaces and then there’s the performers that range from musicians to snake charmers and dancers. The place literally has it all and it never gets boring and is quite a spectacle at night. The markets sell anything and everything from herbs to handbags, where you have the chance to barter and there are plenty of food stalls, which give a real sense of realism.

You will notice that the Medina is surrounded by city walls and gates that were built by the Almoravids in the 12th century to protect it, who used red and orange clay and chalk. The main palaces in the area are the El Badi Palace built in 1578, the Royal Palace and the Bahia Palace, which all have striking Moroccan and Islamic architecture.

The largest mosque in the city is the Koutoubia Mosque, which was built in a unique style, and the oldest mosque, Ben Youssef Mosque, is also found here. Another huge tourist attraction is the Saadian Tombs, which were only found in the 20th century and is the burial site of Saadian rulers in the 16th century. The Medina is also home to two of the most famous museums with the Marrakech Museum having displays on classic Moroccan tile work, carvings, art, pottery, coins and other items. The Dar Si Said Museum has an extensive collection of items that have been made all over the country like pottery from Safi and jewellery from the Atlas Mountains.

At night, it is possible to attend one of the theatres near the square, which have various plays and productions and there are lots of hammams that offer massages and have steam rooms. You are certainly in the best area for food and hotels with many restaurants being on top of buildings, which offer tasty local delights and there are many that serve European and other Asian food too.

Being a Muslim country, alcohol is very difficult to purchase though there are a few around the square and hotels and riads are in abundance with many luxury places being close to centre.

Hotels in the Medina of Marrakech

Other neighborhoods to stay in Marrakech 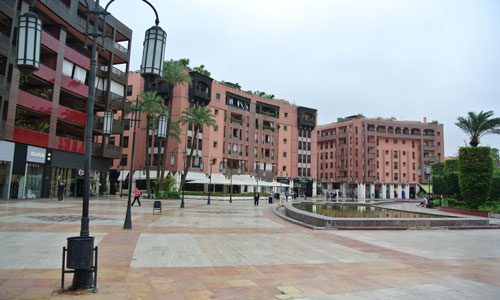 This is the new town, which was built by the French in the 19th century and looks very modern compared to the other world of the bordering Medina. Again, there are many street markets in the area but they are close to big department stores and there are traditional restaurants next to brand spanking new ones that serve all types of food. It is certainly less intense in the area and there are some nice gardens and parks to see with the Marjorelle Gardens being the best. The garden has a decent collection of plants from all over the world and there is a small museum, which is dedicated to the Berber, which the locals are called. There are many little cafes that give the place a European feel to it and there are plenty of luxury Western-style hotels to stay at. This is perhaps why there are many tourists who prefer to stay in Gueliz as well as being nowhere near as chaotic as the Medina. 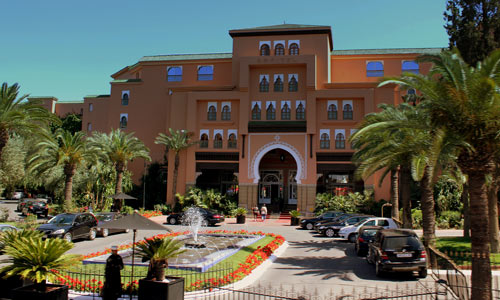 This district is only a few minutes’ walk away from the Medina, which is a wonderful area that has many luxury hotels and most have their own swimming pools. There are a fair number of souks that sell most of what is sold in the Medina but in calmer environments. The hotels also serve some of the most exquisite dishes in the city though there are some good restaurants not too far away. 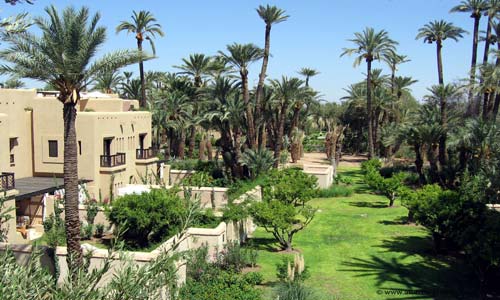 La Palmeraie is to the north-east of downtown on the outskirts of the city and is a large oasis-like area that is covered with thousands of trees. Here you can take camel rides through the grove, where you can get a feel for local rural life. The hotels here are all five-star luxury hotels that all offer top quality food and drinks as well as the newest facilitie.