WHERE TO STAY IN ABU DHABI FOR TOURISTS 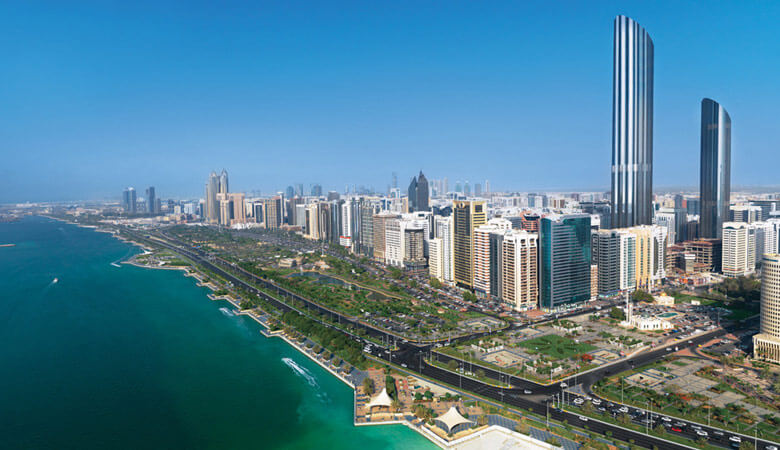 Where is the best area to stay in Abu Dhabi?

This federal capital of the United Arab Emirates was only a little fishing village back in the 1960s but since then has had a remarkable transition after realising it was sitting on a goldmine of oil reserves. Today, it is a modern city with huge and gleaming high-rise buildings, international luxury hotels, enormous brand new shopping malls, gardens and parks. Abu Dhabi is also home to sandy beaches with clear waters for swimming, massive mosques, various islands and an extremely friendly community, which makes your holiday that bit more enjoyable.

The best area to stay in Abu Dhabi is the downtown area near the beach as this is where the main tourist neighbourhood is based. In this area, there are numerous luxurious hotels overlooking the sandy beaches, offering the most awesome vista in Abu Dhabi as well as being home to the best selection of restaurants, pubs, clubs and shopping malls in the city. There are also parks, gardens and a port where you can see fishermen going out and coming in with their catch and there are opportunities for you to have a go on a fishing boat trip.

On the map, which shows the most convenient area to stay in Abu Dhabi, you can see a selection of some of the best located hotels.

Downtown and The Corniche areas In terms of historical and cultural tourist attractions, it is fair to say Abu Dhabi does lack in this category, but that doesn’t mean to say there isn’t anything to do and see as there are many things that the city offers to visitors. Not surprisingly, the downtown area is a particularly busy part of the city with a great mix of cultures walking along the pavements, which gives the city that added good feel vibe. Luckily the downtown area is close to the beach and this is where you can cool off from the occasional 50 degrees Celsius heat.

The beautiful waterfront, which is known as “The Corniche”, spreads out over 6kms and there is a promenade where you can walk the entire length if you want to. As well as sunbathing and swimming on the various sandy beaches, there are a whole host of activities to do including parasailing, jet-skiing, windsurfing, banana boating, go-cart riding, cycling, playgrounds for the kids as well as parks to relax in.

There are also a few bandstands, where events do take place throughout the year and make sure to check out if there is anything on as it is one of the most spectacular places to see performances. Come to the Corniche during the evening at sunset or at sunrise for a romantic stroll or just for photos as these are the best times to see the city in its element. One thing you are certain to see is Marina Island, which is one of five artificial islands and is home to one of the world’s tallest flagpoles with a giant UAE flag that stands 123 metres high up. Other things to see and do include the Abu Dhabi Cultural Centre, which holds cultural events, art exhibitions, performances, children’s activities and many other things.

Another major highlight of the city is the Dhow Harbour, which has a lot happening throughout the day with either fishermen departing or arriving safely from their day out on the water. There are also a number of boat cruises that take you around the city and along the coastline as well as fishing trips, which provides excellent fun. The harbour is also home to a good selection of seafood restaurants and can get extremely busy and therefore is best to book if you have a big party. Close to the harbour area, there are a variety of markets which sell fish, carpet, fruit, household goods, Iranian handicrafts, plants and many other products.

A few streets in from the beach area, there are many shops and malls, which is an absolute heaven for shopaholics. The best places for shopping are the department stores as they offer air conditioning, which can really help you when shopping with the most popular malls being Abu Dhabi Mall and Al Wahda Mall. These malls are gigantic with many high-end shops and brands like Chanel, Gucci, Louis Vuitton, Diesel, Adidas and many others. There are also supermarkets, restaurants and observatory decks, which offer stunning views over the city.

Generally the best for food and drink is found at the hotels as they are the only places that can serve alcohol. There are restaurants along Salam Street and the waterfront but most of them are Indian based, whereas the hotels have a diverse range of cuisines. For accommodation, head to the waterfront as they offer the best views, rooms and customer service.

Other areas to stay in Abu Dhabi Yas Island is an amazing family-friendly island in Abu Dhabi that is only 30 minutes away from downtown by car. On Yas Island, you will find beautiful beaches, incredible shopping and restaurants, and stunning hotels to suit any price range.

The real draw to Yas Island, however, is the island’s off-the-chart theme parks and attractions. Check out Ferrari World Abu Dhabi for the world’s fastest roller coaster “Formula Rossa”, to try your hand at go-karting, or to get behind the wheel of an actual Ferrari! There’s even a track specifically for kids with scaled-down replicas of Ferrari F1™ race cars!

Yas Waterworld is the perfect place to cool down on Yas Island. It is the ultimate water park, and you’ll have over 40 rides, slides, and attractions to choose from. Lastly visit Warner Bros World™, an indoor theme park with roller coasters featuring your favorite Warner Bros characters!

Rest of the main island The rest of the main island is centred around 2nd Street and Al Khaleej Al Arabi Street with these areas being particularly safe and being home to numerous hotels, restaurants and some excellent tourist attractions. The major highlight of the area is the Grand Mosque, which is the third biggest of its kind on the planet and even makes the Taj Mahal feel jealous with the amount if gold, marble and silver contained inside the mosque. The mosque is so large that it can take 40,000 people at once and features seven huge chandeliers, a giant Iranian carpet and has one of the biggest domes in the world.

There are guided tours and is easily found when on the main island with the majority of buses going to the mosque. Another tourist attraction is Khalifa Park, which is the best park in the city as there is an aquarium, a small history museum, gardens, playgrounds and sports complex. You can also take a boat to the nearby artificial islands of Lulu and Reem, though there isn’t an awful lot to see. For shopping, the best place is the Khalidiya Mall, which has a good selection of shops as well as a cinema complex and food court. These areas are dotted with hotels and hostels and are generally a bit cheaper than that on the waterfront and therefore offer a brilliant alternative to stay in.

Hotels near the Grand Mosque