WHERE TO STAY IN ALBANIA 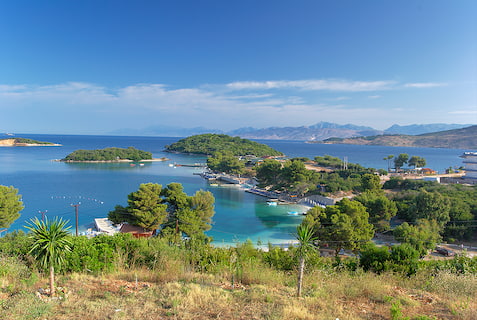 What are the best places to stay in Albania?

Albania is one of Europe’s best kept secrets – a country where huge mountains meet the crystal blue waters of the Ionian Sea, where Alpine style peaks see snow in winter and where tranquil lakes enjoy Croatian style weather in the summer. It’s rich in history and culturally vibrant, while also less saturated by tourists and far cheaper than some of its other neighbours. Coming to Albania you see some of Europe’s most stunning scenery, while also retaining a sense of adventure.

Albania’s most famed attraction is the country’s incredible coastline along its Riviera – with destinations such as Dhërmi, Sarandë, Ksamil and Vlorë in the south among the most popular. At the opposite end of the country, you have Shkodër on the Shkodra Lake, shrouded by huge peaks behind. Between the Riviera and Shkodër you have the coastal resort of Golem, on the Adriatic.

The capital Tirana is a bustling city in the centre of the country and a good staging post for all the country’s destinations. Meanwhile, if it’s mountains you like then the areas around Berat and Korçë are for you, wonderful locations for nature, hiking and relaxation. Similarly, Lake Ohrid, on the North Macedonian border, is one of Europe’s most picturesque lakes and draws many people each year seeking a nature retreat.

Best places to stay in Albania The coastal town on the Albanian Riviera has one of the most stunning backdrops to any beach in Europe – the enormous Ceraunian mountains run straight down to the crystal blue waters of the Ionian Sea and the town winds its way up the mountainside. The area caters for all budgets, with top resorts and affordable hotels dotted along the seafront and further up the steep hillside.

The town is awash with tasty restaurants, particularly seafood, and is a favourite for water sports enthusiasts – with jet skis, paddleboards and kayaks all available for hire. The surrounding coastline is dotted with steep cliffs, hiking routes, hidden coves and places to snorkel. 200 metres above the beach is the Old Town, with its historic buildings and alleyways looking down towards the Ionian Sea.

Meanwhile, only a short drive or boat ride away is the hidden canyon and beach at Gjipe, often called Albania’s most beautiful. The much bigger city of Vlorë offers similar stunning scenery to Dhërmi, with huge stretches of stunning coast alongside crystal blue waters and shrouded by enormous mountains. Its long promenade walkway is dotted with hotels and there are far more options for dining, drinking and shopping. The city is surrounded by olive groves and day trips are offered to pick, taste and eat among the olive groves with local growers.

The city is rich culturally and has been ruled by the Ancient Greeks, Romans, Byzantines, Normans, Venetians and Ottomans over its history – as a result the region is full of monuments from different time periods. Just north of the town you have the Vjose-Narte Delta Nature Reserve, a stunning coastal lagoon and protected area of wetlands and sand dunes, which is full of bird life.

Meanwhile in the nearby bay you have Sazan Island, an idyllic island, with boat trips running daily from the city. 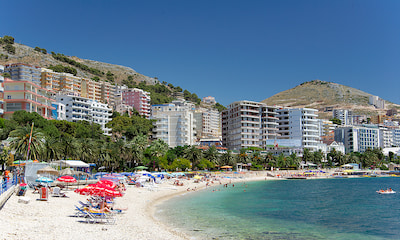 Further south, over-looking the Greek Island of Corfu, you have the coastal resort of Saranda. Like Vlorë, it’s a sizeable city with many hotels lining its long promenade, over-looking the Ionian Sea and surrounded by mountains. The city is vibrant and alive in the summer, with people flocking to its beaches and many beach and nightclubs.

Boat rental is available to explore the hidden coves nearby, along with fishing and scuba diving guided trips and there are many hiking trails in the mountains behind the city. The city is full of many tasty places to eat, drink and relax, particularly along the seafront. Nearby you have the UNESCO World Heritage site of Butrint - an Ancient Greek and later Roman city – which is considered one of the most important archaeological sites in Albania.

A little further away inland you have a natural phenomenon called “The Blue Eye”, a series of natural springs where you can swim, surrounded by forest. 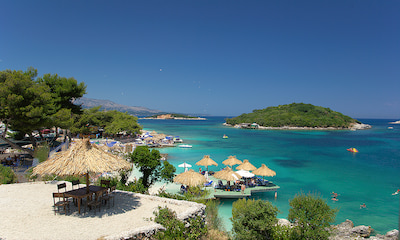 In the south of the Albanian Riviera, near the Greek border, you have the stunning coastal resort of Ksamil. The village is located on a spit of land with water on either side of it – the Ionian Sea on one side and a lagoon behind, along with several small islands. It’s geographical make up means it has many fantastic beaches and safe locations to swim, along with many popular hotel resorts.

Ksamil is surrounded by the Butrint National Park, a huge area of ecological significance, with freshwater lakes, wetlands, salt marshes and islands – perfect for hiking and cycling. With water all around, Ksamil is a great spot for water sports, with paddleboard, kayak, pedal boat and snorkelling hire available throughout the area.

The village is buzzing in the summer and has many nightclubs, bars, beachside restaurants and cafes, but with nature all around it’s easy to escape for some tranquillity. 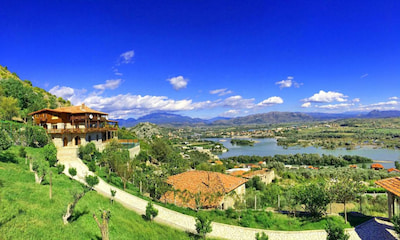 In the north of the country, near the border with Montenegro and alongside Lake Shokdra, you have the city of Shkodër. It’s a major hub for nature enthusiasts in the country and is a good location to base yourself to explore the Accursed Mountains, also known as the Albanian Alps.

The region is very popular with hikers, climbers and mountain bikers and the city caters for the market with many hotels and guesthouses. To the south of the city, you have the dramatic Rozafa Castle, which sits on a rocky hill, 130 metres up overlooking the lake. The coastline is only 45 minutes away too, so here you can make the most of mountain life and the coastal resorts on the Adriatic. The city has bustling markets and is a cultural capital, with many traditional tasty restaurants.

The lake is popular with water sports enthusiasts and you can rent kayaks and boats to explore its shores. 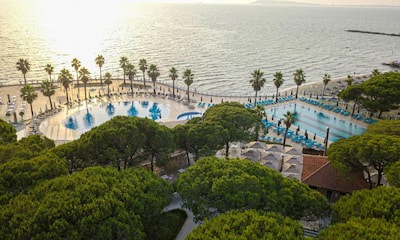 Further south of Shkodër, on the Adriatic coast, you have the seaside resort of Golem, near the busy port of Durres. The area boasts miles of beautiful beaches, many seaside hotels and peaceful locations to sunbath and enjoy the stunning coastline. The main attraction is the coastline here and the region is set up for the high demand in the summer with lots of beachside eateries, bars and cafes.

The area is only 30 minutes outside the far bigger Durres, a major port, which has ferry connections to Italy and other locations. The city also has many shopping, eating and drinking options if you want to see a livelier side to the area. Further inland the region boasts a number of lakes and miles of dense forest, popular with hikers.

Like many locations along the Albanian coast there are also numerous spots to do water sports in Golem and locations to rent equipment. 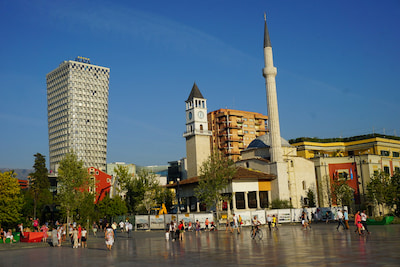 The country’s bustling capital city is a buzzing melting pot with many hotels, lively nightclubs, tasty restaurants, cafes and packed-out bars. It’s also a cultural centre with many of the country’s top museums, art galleries, music venues, theatres and other attractions. It isn’t short on history either -with mosques dating back 100s of years, Roman remains and other historic sites.

Although the coastal resorts are alive in summer, Tirana is lively throughout the year and it is here where you can see how dynamically the country has shaken off the chains of its recent history. It’s an artistic and creative hub, with a young population and youthful outlook on life, along with a lot of public art and colourful buildings.

Its central location means it’s also a good spot to base yourself to explore the rest of the country and has the country’s largest airport. 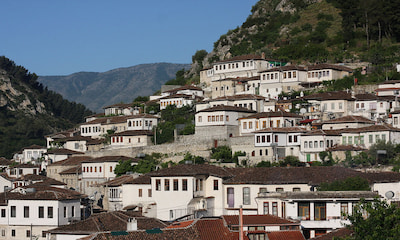 Berat offers a very different side to Albania than the coastal resorts on the Riviera. The city, surrounded by mountains in the centre of the country, on the Osum River, is famed for its rich history and cultural importance. Traditional white Ottoman houses climb up the hillside from the river, with winding backstreets, giving it UNESCO World Heritage site status.

With mountains and forests surrounding the city, it’s popular with hikers and wildlife enthusiasts too. The city also boasts a Medieval bazaar, a number of decent museums and many places to eat and drink. Sitting high up above the city is Berat Castle, the biggest in Albania, with striking views out around the region’s wild landscape.

Berat is a wonderful place to see traditional life and sample Albanian cuisine, while also being a great location to base yourself to explore the nearby Tomorri Mountain National Park. 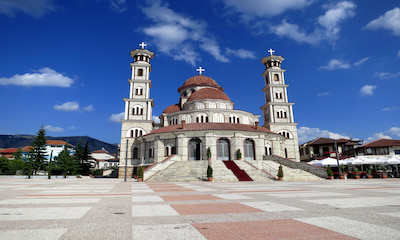 This historic city is a beating cultural heart, near the Greek and North Macedonia border. For hundreds of years it’s been a cross roads for many different cultures and an important trading post. As a result, it has a diverse make up, which makes it exciting culturally and its architecture reflects its mixed history too.

It’s also an important staging post for people wanting to explore Albania’s famous border land lakes – Lake Ohrid and Lake Prespa. Both offer incredible opportunities to hike, multiple national parks and sites of ecological importance. The area is rich in wildlife and has many unspoilt natural wonders. The town itself boasts multiple impressive museums, galleries and many restaurants and cafes, along with quaint hotels and guest houses.

The city is architecturally fascinating with an impressive mosque, bazaar, cathedral and is a central hub in the region for markets and craft fairs. 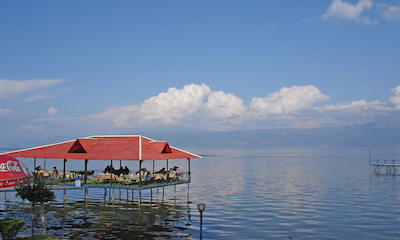 On the shores of the stunning Lake Ohrid you have Pogradec, on the border of North Macedonia. The lake is one of the deepest and oldest in Europe and shrouded by mountains all around, along with dense forests. Pogradec boasts many lakeside hotels, and it’s the nature and tranquillity here which draws many thousands of people every year - to relax, hike or take to the lake itself.

The area is of such ecological importance that it’s protected by UNESCO, due to the large amount of wildlife and many people come to wildlife spot too. The lake’s shores are dotted with restaurants, cafes and clubs, yet the town’s strategic location means the landscape is dotted with historic ruins and sites dating back many hundreds of years too.

You can also nip across the border for a flavour of North Macedonian life and there are many boat trips available to explore the lake itself.