WHERE TO STAY IN AMSTERDAM 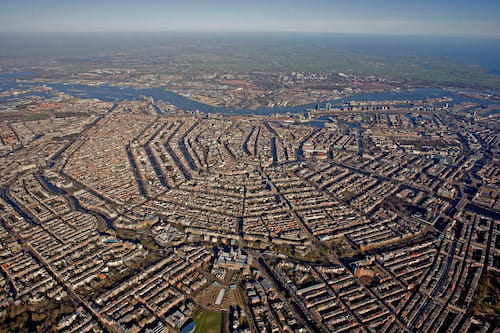 Where is the best area to stay in Amsterdam?

Amsterdam is one of the most beautiful and romantic cities in the world, which is regarded as a small place and for that matter it’s very easy to get around by foot, bike or by the excellent and efficient public transportation. The Dutch city has been picturesquely built around its famous canals, which has given Amsterdam its identity and has all the features of a huge capital city. Amsterdam is proud of its culture and is home to some of the world’s most famous museums as well as many historical sites, the most entertaining nightlife, an extensive range of restaurants and plenty of top-notch hotels to stay at.

The best area to stay in Amsterdam is the city centre as the majority of the tourist attractions are located in the area and other places of interest are only a short distance away.

Here you will find the oldest architecture in the city that dates back to the 13th century as well as the Royal Palace, New Church, Amsterdam Historical Museum, the Red Light District, Anne Frank’s house and lovely walks around the canals. The best bars, restaurants and hotels are all found in the area too.

On the map, which shows the most convenient area to stay in Amsterdam, you can see a selection of some of the best located hotels.

City Centre, the best area to stay in Amsterdam 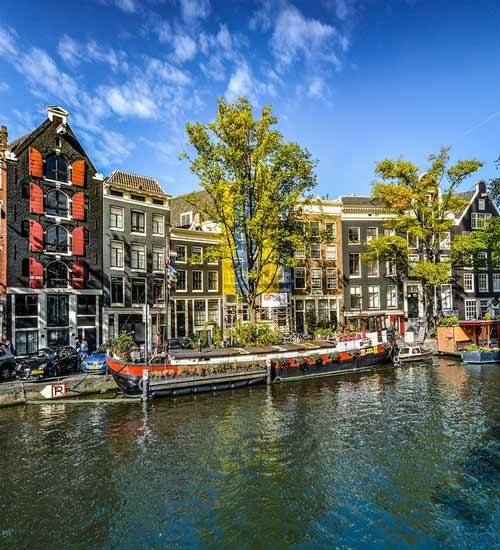 The Amsterdam City Centre is in the shape of a semi-circle thanks to the gorgeous canals that surround it. The Dam Square is the centre point and is the medieval heart of the city, which is dominated by the Royal Palace though, is not longer used by the Royal family, and the New Church, which is used for art exhibitions.

There are over 50 museums in the city with most of them found in this part of the city and are to do with various subjects including the World Wars, archaeological, torture, medieval, cannabis, sex and much more. The Jewish Historical Museum is particularly important as part of the area was full of Jewish communities until Nazi Germany moved in during World War II. The Verzetsmuseum is an award-winning museum that shows what life was like in during Nazi occupation and there are various other amazing museums in the area depicting the same era.

Anne Frank’s House is the house, turned museum, where the Jewish girl, Anne Frank, wrote her famous diary whilst hiding from the Nazis, which is a very moving experience and is a must see. Other decent museums include: The Allard Pierson Museum, Hemp Museum, Medieval Torture Museum, NEMO, Canal House Museum, National Maritime Museum and the Sexmuseum.

The Canal Ring surrounds the city centre and has some of the most beautiful parts of the canal to walk along as well as riding on it. Most of it is from the 17th century and is a UNESCO World Heritage Site for its cultural and historical heritage. You can shop in a whole host of places and there are various markets all over the city centre that pop up in the day and at night.

Make sure you visit the world’s only floating Flower Market as well as the Nine Streets, Utrechtsestraat and Haarlemmerstraat, which are voted as some of the best streets in the country for shopping. There are galleries all over the centre that have paintings, sculptures and other art forms from the 17th century with Schutters being one of the best.

At night, head to the Red Light District to see the unique images of sex workers in the windows, which is taken by visitors as light-hearted and is certainly one of a kind. Comedy shows, theatre productions and cinemas are in abundance as well as the coffee shops which open till late and sell cannabis, which is legal to smoke in the country. For eating purposes, you have the choice of most international cuisines in the city with many places offering traditional Dutch, Thai, American, Asian and South American food.

There are many drinking establishments that have various country-themes and most allowing you to smoke cannabis and there are decent nightclubs that play different genres of music with decent-sized dance floors. Another great thing about the area is that there are plenty of hotels that will be within anyone’s budget and most offer inspiring canal views and fantastic service.

Other neighbourhoods to stay in Amsterdam 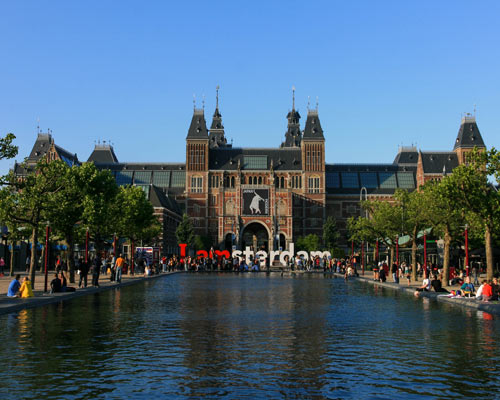 This quarter is definitely second to the city centre as this neighbourhood is home to some of the best museums and galleries in the world. The Rijksmuseum is one of the most famous museums in the city and showcases masterpieces of prints, drawings, photography and sculptures from the likes of Vermeer and Rembandt. Another Dutch art master was Vincent Van Gogh, who had a museum dedicated to his works and consists of some of his famous paintings as well as having a Monet exhibition.

There are also a couple of windmills to see with Molen van Sloten being the only one open to visitors and there are various parks like Amsterdam Bos and Vondelpark, which have large green open spaces to sit and have a picnic and enjoy a beer. For shopping, head to the Albert Cuyp Markt, which is one of the largest and busiest street markets on the continent that sells almost everything and has a strong multi-cultural feel to it.

At night, the place is a little limited but there are various cinemas and concert halls to check out and usually have something on every night. However, there are excellent international cuisines to choose from including local, Indonesian and Korean food. There aren’t as many bars and clubs as there are in the city centre but the ones you do find are authentic and less busy and there are a good number of hotels to pick from. 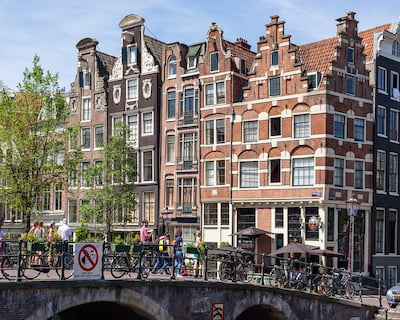 Originally a working-class neighbourhood, the Jordaan has evolved into one of the wealthier and upscale neighbourhoods in the Netherlands, located right in the centre of Amsterdam. The area has an affluent array of art galleries, patio restaurants, cafes, and street musicians, and is arguably Amsterdam's most recognizable neighbourhood.

One of the most famous attractions you can find in this neighbourhood is the Anna Frank House Museum, where Anna frank, a small Jewish girl, was hiding from the Nazis during the Second World War. Among the other attractions are the Boat House Museum, the Amsterdam Cheese Museum, and some beautiful markets such as Lindengracht Market and Westerstraat.

The Jordan neighbourhood's canals and narrow streets are surrounded by indie boutiques, cosy pubs, and popular restaurants, but it is also rich in history and architecture, with surprises around every corner. Allow yourself time to wander and visit unique shops in order to experience the legendary Dutch charm. At night, there are some great pubs along the canal or in the little, winding lanes that surround the neighbourhood. The Jordaan, more than any other part of Amsterdam, exemplifies a peaceful, Dutch way of life, and after just one visit, you'll undoubtedly want to return for more things to do and see.