WHERE TO STAY IN ANAHEIM 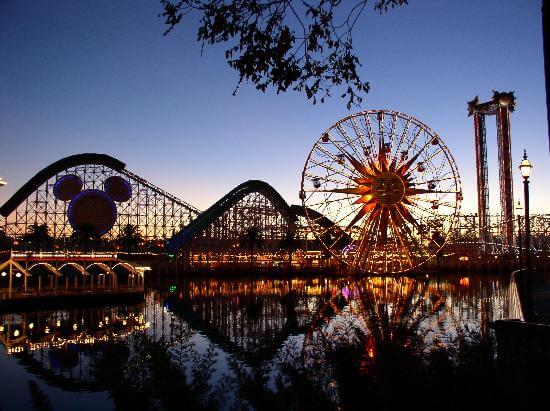 What is the best location to stay in Anaheim?

The American city of Anaheim that is located in Orange County, California, is best known for being home to world famous Disneyland, which has been here since 1955. This huge and popular attraction brings people in from all over the world to experience some of Disney’s magic, which is tailored to all types of ages from the very young to the old.

The city is also home to Disneyland California Adventure Park, the Convention Centre and a couple of sport stadiums that include American League baseball team, LA Angels who play at the Angel Stadium and Anaheim Ducks, who are an NHL Hockey team and play their games at the Honda Centre.

The best area to stay in Anaheim is around Disneyland, which is where you will find Disneyland Resort, California Adventure Park and Convention Centre. This area is where the highest concentration of hotels, restaurants, pubs and shopping are located and of course is the closest place to the main attractions of the city to stay in. The area is well connected to other parts of the city and Anaheim is one of the safest cities in the country, though it is still plausible to walk on well-lit streets when it is dark.

Around Disneyland, the best area to stay in Anaheim 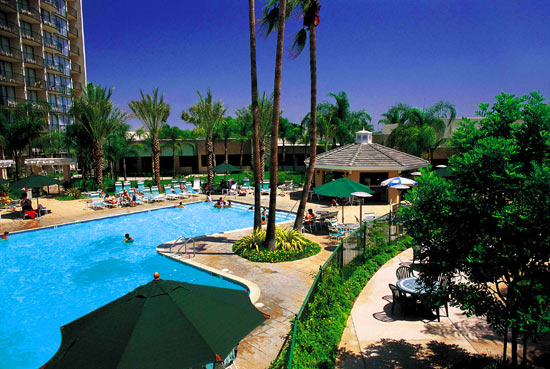 The Disneyland Resort is home to the original Disneyland Park, which has been a favourite among locals and visitors alike for over half a century. The resort is divided into two theme parks with the original being Disneyland and its sister park, Disney California Adventure, opening back in 2001. Once at the resort, all things Disney are accessible by foot but there are various modes of transport like monorails, taxis, bikes and other forms that can take you to all corners of the resort. Disneyland is conveniently close to a number of Southern Californian airports like LA International Airport, Ontario, Long Beach and John Wayne and the district is well-policed, which makes it very safe.

Disneyland is home to more rides than the California Adventure and are generally more suited to the older rider though there are plenty of rides for the younger and smaller generations. The themed lands at Disneyland are divided into eight sections and include Main Street, New Orleans Square, Fantasyland, Mickey’s Toontown, Adventureland, Frontierland, Critter Country and Tomorrowland. Main Street focuses on Walt Disney’s childhood town, Marceline, with a railroad, a cinema on the history of the place and various vehicles on show.

New Orleans Square is home to the Haunted Mansion and Pirates of the Caribbean with Fantasyland consisting rides to do with Snow White, Pinocchio, Dumbo and Alice in Wonderland. The Toontown has some of Disney’s favourite characters as well as rides after them including Goofy, Mickey Mouse, Roger Rabbit, Gadget, Donald Duck and Chip’n Dale. Adventureland is all about adventure featuring Indiana Jones, Jungle Cruise and Tarzan rides that take you to the isolated jungles of Africa, Asia and South America.

Frontierland is modelled after the Old West, Critter Country has various water and dark based rides and Tomorrowland has plenty of space and futuristic rides, including the legendary and incredibly popular ‘Space Mountain’ roller coaster. There are also many performances that go on most nights from parades, shows, comedians, concerts and much more that happen all over the park. 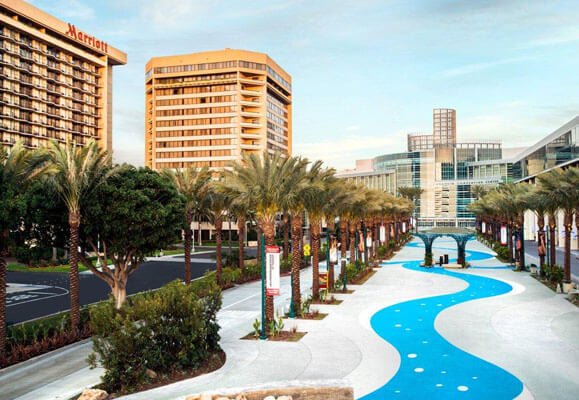 Disneyland California Adventure Park has 5 themed areas including: Buena Vista Street, Golden State, Paradise Pier, Hollywood Land and Cars Land. These areas consist of flumes, water-based rides, simulator films, challenge trails, wineries, high-speed roller coasters, Ferris wheel as well as many rides named after Disney films like Monsters, Inc, Aladdin, Cars, A Bug’s Life, Ratatouille, Finding Nemo, Toy Story and lot of others. Like its bigger sister, there are a whole host of shows and parades that are staged all over the park as well as the legendary firework event that signals the end of the night.

There is also Downtown Disney, which is the entertainment and shopping area and is where you will find a huge street with shops that sell all sorts of products from souvenirs to food and clothes as well as a massive range of restaurants, cafes and pubs. There are a number of hotels inside the resort, though will cost a lot more than those that are found outside of the park, which are within walking distance or provide transport to the resort. Another place that is excellent for shopping is Anaheim Garden Walk, which is a new complex and is very close to Disneyland and contains a great variety of shops as well as quality restaurants, a cinema, pubs, a bowling alley and furthermore, the street that the complex is on also has a brilliant amount of hotels too.

Another surrounding area of Disneyland to stay in is the Anaheim Convention Centre, which is located on West Katella Avenue and was opened back in 1967 and is the biggest of its kind on the west coast. The 1.6 million square feet of space is used for various events including sport, cultural, music, arts, films and many other types that make for a busy schedule and therefore checking out the website of what is next on, is definitely worth it.

The area has many buses that run through it as well as a train station not too far away, so you can get around the city easily and this area is particularly safe too. The great thing about staying in this area is the amount of hotels that are on the same street as the centre as well as shopping departments, restaurants, cafes and pubs.