WHERE TO STAY IN BIRMINGHAM, UK 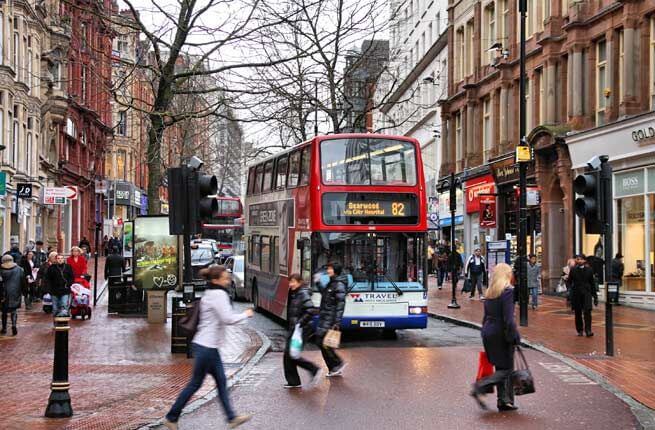 Which is the best area to stay in Birmingham?

Once the heart of the UK’s industrial revolution and was even once coined the “workshop of the world”, Birmingham is now being pumped with wealth and cash. The city has been built on multiple trades and is mainly down to the canals, which knock out Amsterdam and Venice in terms of length. Visitors are encouraged to look up when wandering the streets of Birmingham and look at the numerous modern pieces of architecture that has been built recently. The city is ethnically and culturally diverse and as a result has a great mix of influences, which has the crown of the most Indian restaurants in a UK city.

The best area to stay in Birmingham is the city centre as you will be in a location that makes life easy to see attractions, go shopping and find the most interesting and striking modern and traditional architecture. From here, Chinatown, the Gay Village and the Jewish Quarter are all in walking distance of the city centre and the area is well connected with the rest of Birmingham.

City Centre, the best area to stay in Birmingham 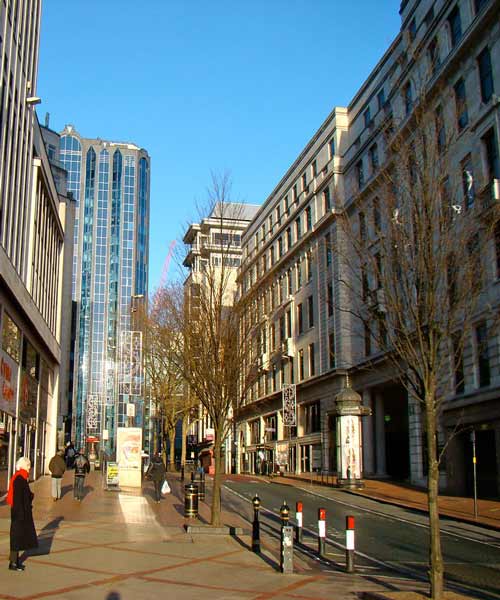 The city centre is littered with scenic walks and parts of it are pedestrianised, which is a godsend as you don’t have to look out for traffic all the time. One of the more popular walks include starting out at the International Conventional Centre and walk towards the most famous shopping centre in Birmingham, the Bull Ring. This route takes you past most of the famous sites in the city centre like the city centre gardens, which is a beautiful green space, as well as various squares like Centenary and Victoria. You also get to see other main shopping areas like New Street and the Pallasades, where there are numerous shops that sell top brand names.

You are spoilt for choice in terms of museums and art galleries though, with the Birmingham Museum being the largest and holds the most interesting array of exhibitions that mainly focus on the history of the city and has an extensive display of modern art. IKON gallery is another fine art space that contains temporary modern displays of art that has been done by local artists. Soho House is the tranquil home of Matthew Boulton, an industrial leader back in the 18th century, who met many powerful scientists and engineers at that particular time.

Thinktank is a science museum, which is located close by to Soho House and is one of the most entertaining places in the city as there are lots of fun activities to try as well as checking out the different types of vehicles that have come from the eras. The city centre is also where you will plenty of religious buildings like the towering Birmingham Cathedral and is a Grade 1 listed building and displays the elegant architecture that was of the early 18th century. Due to the various mixes of cultures the city also has Sikh temples, mosques, pagodas and churches that are generally close to each other. If you love your sports, then Birmingham will be one of your favourites in the UK as it is home to Premiership football grounds like Villa Park and Edgbaston, an international cricket ground as well as the NEC Arena, which hosts many international events including cycling. All of these need a bus or train to get to but are easily connected from the city centre.

The city centre is without a doubt the best place to go for nightlife and there is a good choice of cinemas and theatres in the area with Alexandra and Old Rep Theatres being the most well-known and showcase all the latest films out as well as productions. There are also chances to see comedians at the New Street Comedy Club and the club usually has the most impressive and upcoming performers in the land. For live music, the CBSO Centre is one of the major highlights as the centre plays host to a variety of music genres from classical to metal, though there are many bars and pubs in the centre that regularly offer live music too.

Let’s hope you like your Indian food as the city is known all over the country as the “Balti Capital” as it was first started here during the 1970s and is very cheap. In the city centre you will be astonished by the ridiculous supply of Indian restaurants, which is a sight in itself and be warned that you will be swarmed with workers trying to tempt you into their own establishment. Don’t worry though, as there are other cuisines like Thai, Italian, Chinese and English, which have a great selection of dishes between them. The city centre is full of party places like pubs and clubs with many of them found on New Street, which range from old dingy places to huge venues that host international stars. As well as the amazing range of nightlife, the city centre also has the biggest cluster of accommodation in the city with many chain and independent hotels that are mid-range and up.

This area is just to the west of the city centre and is home to one of the best areas for nightlife, which includes Broad Street. The clubs here are some of the most famous and many celebrities come here to party along with the locals. The National Sea Life Centre is a good-sized aquarium with many species on show like turtles, rays and piranhas and there are some decent parks, where you can relax by the lake or take a walk into the woodland or sit and have a picnic.

Restaurants are easy to come by with many cuisines catering for Indian and English foods and you are never too far away from a decent hotel.