WHERE TO STAY IN BOGOTA 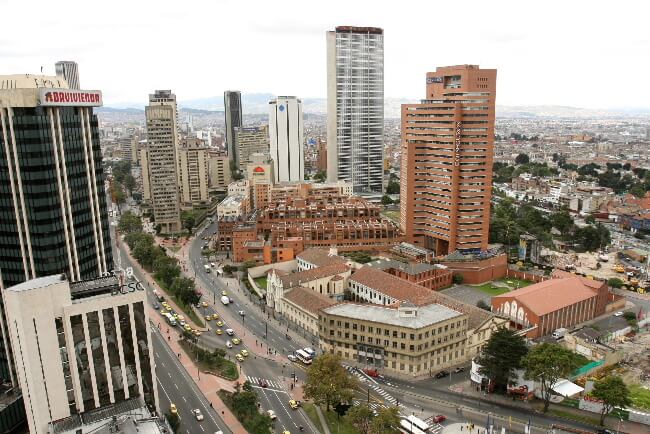 Where is the best place to stay in Bogota?

Bogota is Colombia’s cultural capital; a busy metropolis, surrounded by the peaks of the Andes. In this vibrant city, you’ll be treated to colourful local cuisine as well as being able to see elegant colonial buildings that have been transformed into hotels, shops and bars. Visit the Museo Botero del Banco de la Republica to admire some stunning Colombian art. Head to the Ciclovia on a Saturday- when the city’s streets are closed- so that cyclists, joggers and dog walkers can enjoy traffic-free time. Take a stroll around the beautiful Jardin Botanico Jose Celestino Mutis, or hike up Mount Monserrate for stunning panoramic views of the city.

When it comes to where to stay in Bogota, there is one area that really stands out - the Zona Rosa neighbourhood. This is the Tijuana of Bogota, the place to party. Almost every building and every entrance you see will lead to a nightclub, a bar, or a coffee place. There are few places in Bogota where you can be this social with great music - Salsa, EDM, rock, reggae etc. You are almost guaranteed to find a place that will cater to your individual taste in the massive list that comprises over 100 options.

Zona Rosa, the best area to stay in Bogota The whole of Zona Rosa seems to encompass what is known as “La T”. This is the name given to the' T' shape road where most pubs are located. It is a common sight to see passers by at all times of the day, since not only are there pubs, but also boutiques and restaurants in this very popular area. It is here that you will see a lot of activity during times such as Halloween, St Patrick's Day or whenever the Colombian football team plays.

However, it is not all perfection; even expats are known to complain about the high prices in this vibrant area. You will find high prices for everything - basic or non-basic - if this is where you choose to  spend a few weeks. Once you think about how beautiful the buildings are, how safe it is and how close the Andino and Atlantis malls are; you will know that it money well spent.

It is widely considered to be a safe area. The streets are very safe as the police patrol the area 24/7. Transport wise, you might struggle a little depending on where you want to go, but most popular areas are close and there are frequent buses. However, Zona Rosa is not surrounded by main roads as some other areas.

Other areas to stay in Bogota This is a beautiful residential area, but there is much more to it than that. You will be close to transmilenio (the fast bus service) and the mighty '7th street' with its restaurants, downtown fairs, universities and night clubs. You will find it all there- plenty of partying, bars with chilled live music, smart private lounges, and more.

Ohh, and did we mention Zona G?, literally just a few blocks from Chapinero, you will find many of the absolutely best restaurants in the city. When it comes to balance, you will find most of the things you need in this area. Transport can be difficult at times, but when you consider that you have it all here, do you really need to go anywhere else?

This is plenty to do in the evening as Chapinero has excellent restaurants for authentic Columbian cusine. Another attraction is the theatre. Chapinero is one of the most gay-friendly areas in the city and one part of it is known as Chapigay. Traditions, hostels, expats, bars, coffeeshops,street art and more Have you noticed how in most big cities the hostels are located in the most lively cultural and enigmatic areas? Well, this is no different. Candelaria proudly hosts a vast number of hostels and cute, family-owned small cafes. Candelaria is the beating heart of the downtown area and one of the main spots in the city.

You will see the most classical styles of architecture, handicrafts, and authentic Bogota culture. Bogota city was founded here, and the famous “Chorro de Quevedo” is considered the exact spot.

Prices are low and fair, transport is relatively easy as it is close to the transmilenio. However, consider that you will be on the southern part of the city and therefore many places will be quite a distance. It does admittedly feel overcrowded at times and crime is an ever-present problem, but if you want colourful traditions mixed with an attractive area look no further... Usaquen is a charming place and is  pretty much a small independent town in the middle of Bogota. You will see the church just in front of the main plaza, as is the tradition in the  majority of towns in the Country.

This was an independent town that got absorbed by Bogota as it grew, which is why you will be able to see typical architecture rubbing shoulders with massive new office blocks. Here you will see storytellers, jugglers, and a seemingly endless array of handcraft stalls- especially on a Sunday.

Nevertheless, there is much more than that here.  The area is surrounded by medical centres, which  cater for the older potential expats in the city. The area is filled with great restaurants, but in the rare case that you can´t find the food you are craving, you will find Santa Barbara mall which is a mixture of classic architecture and modern options with plenty of food ideas.

Transport wise, you will be sitting on the 7th street (mentioned above), which should connect you easily with most parts of the city. It is, admittedly on the most eastern side of the city, which might mean longer bus journeys to connect with  many areas, such as the airport or the bus terminal (both located in one of the more western parts of the city). An area commonly (and surprisingly) often overlooked. Here you will find the beautiful Centro Internacional, a few blocks of the smartest small apartments. If you are looking to find the ultimate loft for singles, you should find it here!

The transport network is top notch. Transmilenio, main streets, other bus options, and fast avenues are all available. If you want ease of movement, this should be a strong candidate.

But why settle just for that? When Macarena (amazing restaurants and cafes), Candelaria, and Chapinero areas are this close and possibly the best underground party area lies just a few blocks away? The “Parque Nacional” and many museums are also close by.

Some areas (especially in the southern part) might be close to more difficult areas, but given the number of people that gather here, you are not likely to find yourself in the wrong place at the wrong time. When it comes to being close to the financial and office hubs of Bogota, you will struggle to find an option better than the Chico neighbourhood. Not only does it easily connect to some of the major traffic arteries of the city, but it also stands on its own as a really lovely place to live.

Numerous residential buildings, parks and international restaurants are just some of the reasons why Chico neighbourhood justifies the higher living cost that you will find, in comparison to the rest of the city.

This is a safe area, one where you should not have issues. However, it is worth mentioning that whilst being so close to the massive party area (roughly between streets 76 to 95 and avenues 11 to 15) this also creates the opportunity for pickpockets to approach those heading home after partying.

Although not as close as some of the other mentioned areas, you are not far from some important malls, such as Andino, Floresta and Santa Barbara.