WHERE TO STAY IN BOLOGNA 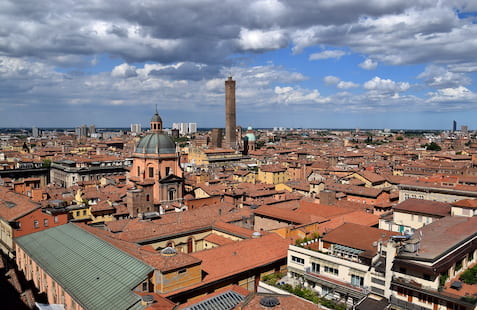 What is the best area to stay in Bologna?

Bologna might be Italy’s best-kept secret—located in the north-center of Italy, between the touristic poles of Florence and Venice, and relatively close to Milan. Bologna is an ideal place to visit in between those other popular cities for a more authentic break into the Italian culture and lifestyle. Visit this underrated city if you crave a picture-perfect destination for a trip into art, history, architecture, and Italian best cuisine. Stroll around its iconic streets with porticoes, or attend one of the many cultural events happening in the city. Known for its prestigious university and renowned cuisine, this city of flavours and red colours is here to surprise you.

If you want to know where to stay in Bologna, the best area to stay is the city centre. Especially if it’s your first time visiting the city, there’s no better way to explore it than from its historic centre, the real heart of the city. If you pick a hotel in the urban centre you will have the opportunity to easily walk around the different districts, explore the local life and energy of the city, and get lost in its charming streets. Bologna is not a huge city, but its city centre offers a variety of cultures and tones which you will appreciate by staying in its core

On the map, which shows the most convenient area to stay in Bologna, you can see a selection of some of the best located hotels.

City Centre, the best area to stay in Bologna

The city centre of Bologna is divided in several smaller districts. From the central and touristy Piazza Maggiore & Historic Center, to the lively and authentic district of Santo Stefano. Wander around the iconic porticoes of the city in Saragozza and get lost in its charming cobblestone alleys, or beautiful gardens in Castiglione. And if you crave Bologna’s nightlife and vibrant personality, the district of San Felice & Pratello will be your best choices. 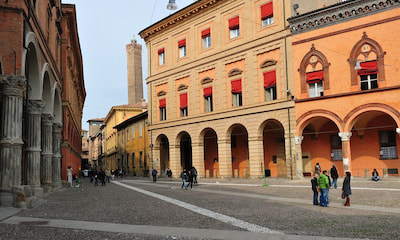 Santo Stefano is a central district perfect to explore Bologna and be conveniently located near all main attractions. The fascinating neighbourhood hides a very authentic vibe—filled with delicious dining spots and relaxed bars.

Walk down the narrow streets of this district and discover the lovely Piazza of Santo Stefano. Here, you have the Seven Churches square with its Basilica, a beautiful place to explore. You can also sit for a relaxing coffee break in one of the cafes in this square: it’s the perfect spot for some people-watching.

Stay in this neighbourhood, and you will also be closely located to Bologna’s hidden little gem: The Finestrella. Wander around the quieter streets of this district and pay attention to the subtle sound of a river, the Reno, which creates a surprising canal in a couple of hidden spots in Bologna. Come here to experience “a little Venice vibe” in Bologna, overlooking the romantic canal view from the lovely tiny window. 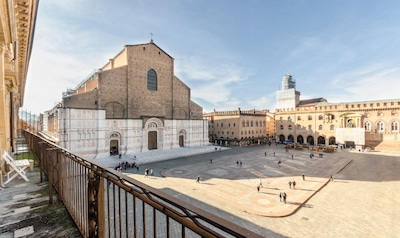 If you are visiting Bologna for the first time, you might be interested in exploring its famous museums and exhibits. If that is the case, you should stay in its historic center near Piazza Maggiore and the city’s main attractions. This area is ideal if you want to be in the middle of everything, as Piazza Maggiore is the real heart of Bologna.

The area is very touristy and busy, but it certainly doesn’t lack attractions that will fulfil your visit! From the medieval building and majestic cathedral of San Petronio to the Fountain of Neptune, or the Public Library Biblioteca Salaborsa—Piazza Maggiore offers most of the cultural and artistic points of interest in the city.

Here you can also find the famous two towers - Torri degli Asinelli and Torri Garisenda – the other symbols of the city. You can climb Asinelli Tower for a stunning view of the city. Food lovers should also head to the popular Quadrilatero—the oldest market in Bologna, just steps away from Piazza Maggiore. This area made of narrow cobblestone streets is filled with authentic restaurants and bars, offering all kinds of delicatessens. 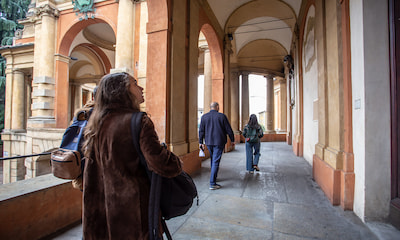 If your idea of exploring Bologna involves getting to know its more authentic personality—stay in the Saragozza district to inhale its most intimate charm. Minutes from the city center, the district of Saragozza will welcome you with beautiful stretches of elegant streets with porticoes and sophisticated eateries.

One of the most fascinating things to do in Bologna is climbing the surrounding hills to see the city from above. And then there’s no better place to do that than from the Sanctuary of the Madonna of San Luca, which is reachable from this particular district.

San Luca is probably every Bolognese’s favourite spot in the city, as it represents a social activity in addition to a point of interest. The sanctuary is located on top of the hill, and locals use the portico as a workout area—you will find groups of friends energetically walking uphill on weekends or summer evenings. Be a local and challenge yourself the same way. At the end of this journey, you will be rewarded with beautiful panoramic views of the hills of Emilia-Romagna, as well as an overwhelming feeling of accomplishment. 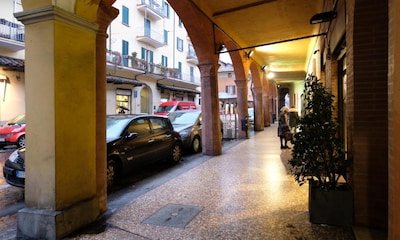 The Castiglione area is ideal if you want to stay close to the city centre but also breathe some fresh air and sleep near the green lung of Bologna: the fascinating Parco Giardini Margherita. Explore the gardens of Bologna from this neighbourhood at the perimeter of the urban centre. This is the perfect spot for those who wish to be immersed in a tranquil green area while they discover the city.

Parco Giardini Margherita—the largest and most popular urban park in the city—is a great place for a workout or a relaxed stroll in the park surrounded by locals. Here you can also grab lunch by a special café and bar, Le Serre, where you can relax surrounded by a Greenhouse with flowers.

In this area, we would recommend visiting the university’s most interesting amphitheatre known as the Archiginnasio anatomical theatre, a very interesting museum that takes you back in time through the history of medicine. 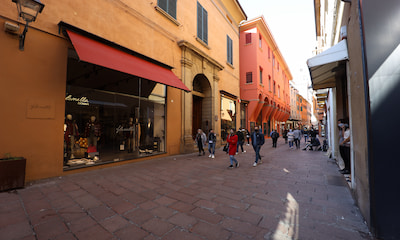 Bologna is also a great party city, and if you are searching for some nightlife on your visit then you might want to stay in the San Felice district, near the popular Pratello street.

There’s no other city in Italy with such vibrant nightlife: bar hop around the bars of the university district, attend an art event or listen to one of the many concerts usually going on in the city. You can enjoy all those activities if you stay in the San Felice district. And if you are craving a real night out in Bologna, head to Pratello and enjoy the nightlife like a real local!

This street comes alive at night, turning the atmosphere of this area into something magical and special, crowding bars with the real essence of Bologna. Here you can enjoy cheap drinks, delicious snacks and live music, all surrounded by a lively mix of people and a very welcoming attitude. You won’t regret coming here, and you will certainly meet friends along the way.

Other areas to stay in Bologna Fiera District is not particularly nice or close to the city, but can be convenient for business travellers or someone who travels by car. Fiera di Bologna (Fair of Bologna) is located northeast of the Historical Center, and it is often home to conventions and major trade exhibitions.

While the rest of the city is not particularly accessible by car, here you have more parking options and accessibility.

Stay in this area if you come for business and choose from the many hotels located within the district. You can use this area as a convenient starting point for your exploration of Bologna, as it is cheap and offers plenty of public transportation options to quickly reach the city centre. 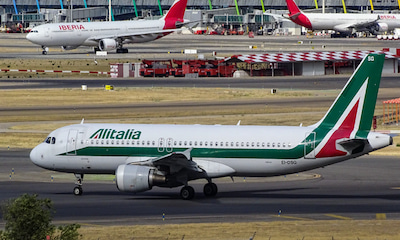 Borgo Panigale is an industrial area outside of Bologna, which can be convenient if you are looking for cheap accommodations or want to stay close to the airport.

This down-to-earth district is known for the Museo Ducati, the Bologna-based racing motorcycles. It also offers a wide variety of dining options, with local and international cuisine.

The neighbourhood is not particularly attractive, but it can be a good option if you travel by car. Additionally, if you stay here and want to access the city centre using public transportation, there are buses from Borgo Panigale that will directly take you to Bologna’s main station and city centre. You can get to the city in about 30 minutes ride, and save money and time on parking.