WHERE TO STAY IN BRISTOL 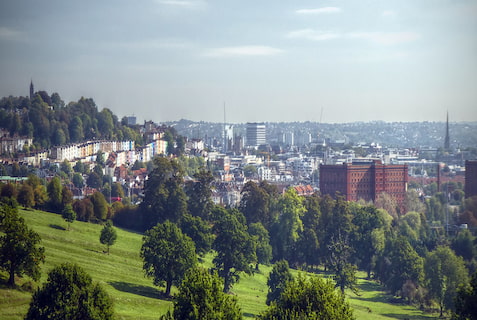 What is the best area to stay in Bristol?

Bristol is one of UK’s most creative hubs – a liberal, waterside city, in the south-west with bags of maritime history, a famous street art scene, thriving nightclubs, gig venues and one of the strongest collections of unique independent businesses in the country. It’s famed for being the home of internationally acclaimed street artist Banksy, and the walls of the city are an open gallery filled with thousands of pieces of art. It’s a multicultural, leafy place, with some of the best green credentials in Europe. Many millions visit each year for its excellent nightlife and restaurants, with beautiful rolling hills and beaches also in striking distance.

The best area to stay in Bristol is in the city centre. Here you can find some of the city’s most historic streets, its main shopping district and hundreds of great drinking and dining options. A number of the city’s busy nightclubs are based here, along with famous monuments, and the compact layout of the area means most places are in walking distance. It also boasts a riverside park, large shopping centre and indoor market. A fantastic location to base yourself during a trip to the city, and in close proximity to other popular areas.

On the map, which shows the most convenient area to stay in Bristol, you can see a selection of some of the best located hotels.

City centre, the best area to stay in Bristol This historic centre and busiest part of Bristol, spanning out north-west from the city’s canal. It includes the Old Town, an area rich with history, with small windy streets packed with independent businesses – including many boutiques, bars and restaurants. It’s a hive of activity at both day and night, with many people flocking to the hundreds of shops and to enjoy its booming nightlife. The Broadmead Shopping Centre is based here too, with many high street retailers.

The waterside setting in the area’s south is home to Castle Park, a green lung in the city’s heart, and also the site of the former Bristol Castle. An array of world cuisine can be found in the area’s streets, and a covered market offers many more shopping and dining options. Only 15 minutes’ walk to the city’s main train station, in close walking distance to other areas. A 20-minute taxi or 30-minute bus ride to the local airport.

Other areas to stay in Bristol The area, just south of the city centre and within a 5-minute walk, is one of the most attractive parts of Bristol. The waterside location boasts many fantastic restaurants and bars, along with a shipping container development, which is home to many cool businesses. To its north is the city’s historic cathedral, which dates back 900 years, and the area is home to a number of attractive public spaces. It’s also a cultural hub with Lloyd’s Amphitheatre based here, where many open-air concerts are held during the warmer months, and the city’s aquarium is also nearby.

The local waterways are busy with boats throughout the year, and there are spots to rent paddleboards and kayaks. It’s also home to art galleries, a bungee jump centre and a replica of a 15th century tall masted ship. Similar distance as the city centre to the train station and airport. A vibrant, creative hub in one of the city’s most multicultural districts. The area, north-east of the city centre, is awash with street art, including a piece by the world-famous Banksy. It’s also a major centre for Britain’s African-Caribbean community, with many tasty restaurants, and an annual, colourful carnival.

The area is known for its liberal, laid-back attitude, and a number of popular music venues, including Lakota, which draws in famous artists from around the world. It's also home to many lovely cafés, bars, restaurants and independent shops. Impromptu street events are also common, with revellers dancing in the streets. It’s a very unique area and one which has buckets full of life throughout the year. A 25-minute walk to the city’s main train station, 10 to the city centre and a similar distance to the airport as the city centre and harbour. A largely residential area in the south of the city, but one that definitely shouldn’t be missed. Like Stokes Croft the area is a hive of creativity - Europe’s largest street art festival, Upfest, is based here every year drawing in 100s of street and graffiti artists and many thousands of attendees. Large scale murals adorn many terraced houses and larger buildings throughout the area. It’s also known for its great array of cool independent businesses including coffee roasteries, breweries, vintage shops and restaurants, among many more.

The western part of the area is also home to Ashton Gate stadium, the home of Championship side Bristol City and Premiership rugby club, the Bristol Bears. A little further out from the city centre and main train station, about a 25-minute walk, and a similar distance to the airport by car and bus. Temple Meads is the name of the city’s main train station, a historic Grade I listed building, which is a major transport hub for the whole region. The surrounding area is home to a number of the city’s large hotels and many office developments. A nearby industrial area houses one of the UK’s most iconic music venues – Motion – which draws in international DJs and artists throughout the year and can house thousands of people. The surrounding streets are adorned with many pieces of street art, and old warehouse buildings have been converted into breweries and other hip businesses.

It’s only a 15-minute walk east of the city centre, and a perfect place to stay if you want to escape the centre’s busy narrow streets. The station has direct links to London and many connections to the south-west coast and other parts of the UK. These areas sit either side of the River Avon where it meets the Severn Estuary, 11 miles west of the city centre. Avonmouth is the home of the city’s major port, where large ocean-going liners come to dock. This is a largely industrial area on the northern side of the river. Portishead to the south of the River Avon is a quiet coastal town, equatorial distance from the city centre. It has a popular marina, full of yachts, and lined by bars, restaurants and residential apartments.

The area also has a nearby beach and has easy access to nearby countryside. A decent place to stay if you want to escape the busy city centre and also see the coast. Much further out than the other areas mentioned – around half an hour by train or bus to the city centre, and the airport is around 30 minutes by car too.