WHERE TO STAY IN BUDAPEST FOR TOURISTS 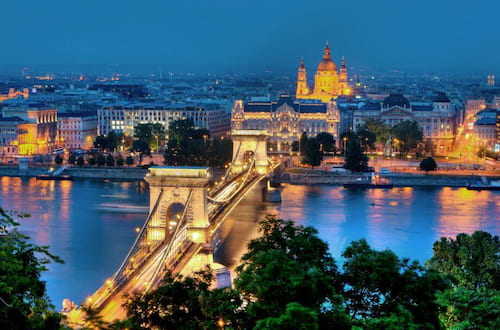 Where is the best location to stay in Budapest?

Nestled on the picturesque Danube river, Budapest is easy to fall in love with. Made up of three historic towns and known as the city of spas, Budapest boasts hundreds of natural hot springs due to the region’s unique geology. When you’ve finished pampering yourself, you can take in the sweeping views across the Danube and see some stunning Art Nouveau, baroque, and neoclassical architecture. Try tasty Hungarian dishes and fresh produce at local markets. As night falls, you can enjoy novelty bars that have sprung up in derelict buildings around the city, known as “ruin bars”.

The best area to stay in Budapest is the inner-city area, known as District V. In this area, you’ll be within easy walking distance of some major sights, such as Chain Bridge, the stunning Parliament building and the beautiful St Stephen’s Basilica. There are plenty of boutiques and souvenir shops and a good selection of restaurants. From there, you can easily walk across the bridge to the castle district, where you’ll find other popular monuments. Transport links in District V are good, with several metro stops and the Budapest-Nyugati train station, which links to cities throughout Hungary.

On the map, which shows the most convenient area to stay in Budapest, you can see a selection of some of the best located hotels.

District V, the best area to stay in Budapest Staying in the central districts within this city will allow you to make the most of your time in Budapest. It guarantees easy and convenient access to everything from tourist sights to shopping and restaurants to various facilities and public transport. District V is at the heart of the action with many attractions within easy reach, which makes it a hugely popular choice amongst visitors to the city.

In District V, you’ll be at the centre of Budapest’s main tourist facilities and amenities - pubs, cafes, restaurants, shopping, historic sights and attractions. It’s a good choice if you want to make the most of your time in the city, especially if you are only visiting the city for a short period of time. It links to the rest of the city via metro, which means that you can benefit from convenient access.

There is no shortage of things to see and do in District V.  Liberty Square, an attractive square in its own right, is also home to a number of important buildings and monuments, such as the American Embassy and the Soviet War Memorial. There is also a cafe/bar located here, allowing you to enjoy a quiet drink in the warmer weather as you take in the surroundings.

Many other places of interest are within easy reach, including the Ronald Reagan Statue, the Ethnographical Museum, Gresham Palace, St. Stephen’s Basilica, the Vigado Concert Hall, and more. You can also stroll along the famous pedestrian precinct, Vaci Street, with its great shopping and numerous dining facilities.

Other central areas to stay in Budapest

There are a number of other central districts that you can choose to stay in when you visit Budapest. Some of these include: If you are a big fan of culture, this is the perfect place to stay in Budapest, as it is considered the cultural hub of the city. You can see the equivalent of Paris’ Champs-Elysées, Andrassy Utca, which leads to the Liszt Music Academy and the State Opera House. You can also find many charming outdoor cafes and bars along Nagymezo Utca, ideal if you want to relax with a drink and watch the world go by. This area is likened to the theatre districts in New York or London, a must for visitors who are eager to soak up some cultural buzz while staying close to the amenities of District V. District VII is known as the old Jewish Quarter and is a great place to discover some history as well as take in the diverse architecture, from historic synagogues to vibrant tenement buildings. Although it went through tragic times in the past, this district has now become a lively and charming area. It is home to the Great Synagogue, the largest in Europe and amongst the largest in the world. You will also find a variety of other historic attractions in the area, including the Jewish Museum, a tribute to the history of the area. District VII offers plenty of amenities: a great choice of cafes, dining facilities and good transport links. When you stay in District VIII, you’ll find yourself in an area that combines the arts, architecture and music. This diverse district is a popular choice amongst visitors who want to enjoy being close to the city centre but not right in the middle of the hustle and bustle. He you will find the Palace Neighbourhood, where many aristocratic families used to live. Many of these palaces have now been converted into hotels, universities and a range of other institutions. You can also benefit from the areas array of facilities, which includes outdoor cafes and restaurants. District IX, with his unique atmosphere, is a good choice to stay in Budapest. It is part of the city centre, and so perfect for public transport (metro, tramway, bus). The streets are full of bars, cafes, street food stalls and restaurants, ideal for hungry visitors and gastronomy fans alike. Raday Street is one of the most famous in Budapest for eating: it is literally lined with restaurants, both Hungarian and international, and boasts the Michelin-starred Costes. If you visit or stay in District IX, you should check out the Great Market, a must for every serious visitor. District IX has a pulsing nightlife due to its many night clubs and the Müpa, a big concert hall by the Danube. Although District XI is located in calm and peaceful Buda, there are many opportunities for entertainment in this neighbourhood. In the last decade, District XI has developed and now offers plenty of cafes, bars and art galleries around the Bartók Béla Boulevard. From the city centre, you can easily reach the district by tramway or metro (M4). Immediately by one of the area’s metro stations, you can stroll around Bikas Park, an ideal venue for a walk, a picnic or a rest on one of its benches. It has a playground for children, a running track, an outdoor gym for a workout, a basketball court, and a football pitch.   Feneketlen Lake (the name means “bottomless lake”), not far from Kosztolanyi Dezso Square, is another beautiful place with a jogging track and outdoor fitness machines.  At the top of Gellert Hill, you can find one of Budapest’s most emblematic symbol, the Citadella, which served as a fortress in the past and is now a UNESCO World Heritage Site. For Hungarians, the Citadella, with its famous Liberty Statue, is the symbol of the country’s freedom. Gellert Hill is also one of the best places to view Budapest: at the top of its 235 metres, you get a stunning panorama over the city. Situated in a historic part of the city, in the old town of Buda, District I (often called Castle District) is a perfect choice if you are looking for a peaceful stay with amazing views over the Danube and the east side of the city. The nights are extremely quiet and offer wonderful romantic walks on Castle Hill. This is an area best discovered on foot. Driving through the narrow labyrinthine streets of Castle District is a challenge, even for the locals. Fortunately, public transport networks are well-built Castle District is accessible from the city centre by bus or funicular railway. The district is bulges with buildings, all part of the city’s architectural and historic heritage.  Buda Castle, the Fisherman’s Bastion, the Matthias Church and the district’s museums are all worth a visit. The castle area also hosts many gastronomical and cultural events, such as a chocolate festival or a wine festival.  The restaurants are a little expensive, but these traditional Hungarian, French and Italian establishments offer good food and high-quality service.

Hotels in District I Some way from the city centre, District XII is situated on the west side of Budapest, in Buda. It consists of large green areas covering the hills. If you want to spend a holiday outside of the busy centre, District XII might be an excellent choice for you. Despite the fact that there is no metro in this area, you can move around everywhere by bus. One of the most popular hiking destination in Budapest, Normafa lies within this district. Normafa, which was renovated a few years ago, has everything that you need for a lovely day in nature: beautiful views, well maintained hiking trails, benches for picnics and even a playground for children. In wintertime, when there is snow, it is also possible to ski on the hill. District XIV is located not far from the city centre and is easily accessible by metro (M1) or bus. District XIV is especially ideal if you want to relax in nature, have a picnic and enjoy the beautiful views, or visit one of Europe’s largest thermal baths, the Szechenyi Spa Baths. The district is famous for its beautiful City Park, Budapest’s largest park and a popular cultural centre in one. Festivals and cultural programmes take place all year round.  In City Park, you can also enjoy family entertainment: a zoo, a circus, museums and other attractions, such as Vajdahunyad Castle or Heroes’ Square. There are a few coffee shops and restaurants in the park if you are looking for somewhere to eat.  The well-known Gundel Restaurant is situated in City Park. Despite District III’s location far from the city centre, you might consider visiting in the summer. Every August, the district hosts one of Europe’s largest music festivals, the Sziget Festival, on Obudai-Sziget, a large island on the Danube.