WHERE TO STAY IN CASABLANCA, MOROCCO 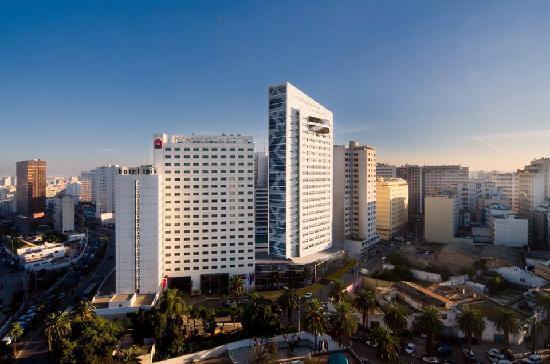 Where is the best place to stay in Casablanca?

Casablanca, made famous by the movie, is one of Morocco’s top tourist destinations and is the largest city as well as having the title of the country’s main port and even though this has meant some neighbourhoods looking a little industrial, Casablanca has many hidden gems to seek. There is a good range of tourist attractions that the city provides including some spectacular restored French colonial buildings, authentic Moroccan markets, an old town, an arts scene and places of worship. Casablanca also has a diverse range of cuisines, though mainly priding itself on its traditional ways as well as bars and clubs, which is one of the main crowd pullers.

The best area to stay in Casablanca is the city centre as this is the ideal place because you are positioned right in the mix of things with the majority of the tourist attractions close by and the port and beaches within touching distance. Here you will find the main museums, the biggest markets, some excellent shopping malls, historical places and a vibrant and exciting nightlife with some of the most exquisite restaurants on your doorstep. The display of wealth shown in this area also gives the district a feel of a city in southern Europe and is one of the most cosmopolitan neighbourhoods in the country.

On the map, which shows the most convenient area to stay in Casablanca, you can see a selection of some of the best located hotels.

City Centre, the best area to stay in Casablanca The city centre is one of the most convenient locations to stay in the city of Casablanca as for starters it is the safest neighbourhood in the whole city. The transport links from this area to the rest of the city are second to none with frequent trams, buses and taxis operating and there are shuttle buses that can take you to the airport as well as to the city centre.

One of the most iconic sights in the city, Hassan II Mosque, is just a couple of kilometres away from the city centre, which can mean an entertaining walk or a short bus, tram or taxi trip. The second largest mosque in the world dominates the city skyline and can be seen from most parts of the city as it has the world’s tallest minaret at 200 metres connected to it.

There is astonishing interior and exterior throughout this spectacular place, which can accommodate for 80,000 worshippers and the fact that it overlooks the ocean and only adds to the experience. It is open to non-Muslims and there are guide tours, where they will take you around the grounds and inside the mosque, providing insightful information to how it was built and the history of the place.

Close to the mosque is the Medina, which is the oldest part of the city and though it doesn’t have particular landmarks to see, the area is full of maze-like narrow alleyways and gives it an authentic residential feel with many buildings from the late 19th and early 20th centuries. The central plaza of the city is Place Mohamed V and is where you will find the majority of the city’s most important buildings including the Palace of Justice, French Consulate, the main post office and the main Bank of Morocco. The square itself has various water fountains and well-pampered gardens to check out and during lunch and after the work, the area gets busy as it is a favourite spot for people meeting and relaxing. Just a few blocks away from the main plaza is the lively and busy Central Market, which has to be a must for any tourist as you will see how it works.

Locals from all around the city as well as some people from outside it come to the market to sell and buy a massive range of products including shoes, vegetables, fruits, clothes, house equipment, spices, herbs, souvenirs, traditional tagine pots and much more with the best thing about it being the bartering. The market provides authentic and brilliant photos and is generally a lot of fun but just make sure you keep an eye on all your personal belongings as pick pocketing does happen here.

Other things to see in the city centre include the Cathedral du Sacre Coeur, which is a charming 1930s cathedral and mixes both European and Moroccan architecture and the Museum of Casablanca is certainly worth a visit as it is home to a vast array of artefacts that have been found in the city. There are also some art galleries to check out with some of them displaying local artists as well as international acclaimed artists and upscale malls and shops can be found along Ahmed Chowki Street.

Another good place to check out and is one that offers some rest bite from city life is the beachfront area, which is where you can sunbathe on the beaches and is possible to swim in the sea though most people pay to get into one of the many luxury hotel swimming pools.

Trying the local delicious food is a must and one of various tagines should be top of the list, which is a type of meet accompanied by a tomato base and many other vegetables that are slow cooked together in a clay pot. Boulevard Hassan I is one of the best streets for tagines but there are a many different cuisines from around the world that you can pick from. For bars and nightclubs, Najib Mahfoud street has plenty and for hotels head to Boulevard Mohamed Zerktouni or the area surrounding Avenue des Far as there are places that appeal to any type of budget.

Other places to stay in Casablanca Ain Diab, often referred to as the “Miami of Casablanca”, is a top choice for holidaymakers and is less than 10 minutes by car from downtown. Home to the well-known stretch of coast known as La Corniche, Ain Diab is a more upmarket neighborhood that has some of the best hotels in Casablanca like the Four Seasons Hotel. If you’re a beach lover, then Ain Diab is the perfect place to stay as there are miles of sandy beaches, and you’ll most likely have an incredible ocean view from your hotel!

You’ll find a range of dining options, from high-end French restaurants to shawarma cafes to beach-front snack stalls. Once the sun sets, Ain Diab transforms into a lively party scene with nightclubs and upmarket bars. During the day, stroll along the boulevard, sunbathe on the golden beaches, or take to the water for a swim and a surf!