WHERE TO STAY IN CINCINNATI 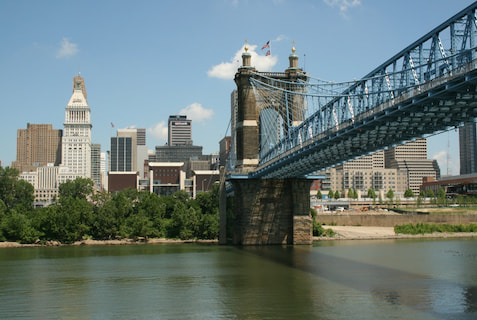 Where is the best area to stay in Cincinnati?

Situated on the undulating Ohio River, the city of Cincinnati is a historic gem in the crown of the Midwest region of the United States. As the third largest city in Ohio, the city has become a top destination for those traveling to the Buckeye state. Professional sports teams, endless green spaces, a burgeoning craft beer scene and a never ending list of community events make Cincinnati one of the most exciting and unique vacation spots in the Ohio River Valley. As one of the most historically rich cities in the United States, Cincinnati also enjoys a high degree of acclaim for its stunning architecture and significant sites.

The downtown area of Cincinnati is the best area to stay on a trip to the city. It is a treasure trove of historic sites and beautiful Art Deco architecture, sprinkled with delicious and unique restaurants and breweries. Within only a few blocks a visitor can take in the true spirit of the city. Walk along the banks of the Ohio River, sample craft beer in the Brewery District, or gaze out across the city’s infamous seven hills from one of the tallest buildings in the Cincinnati skyline! There is no shortage of fun and interesting things to do in the Queen City!

On the map, which shows the best area to stay in Cincinnati, you can see a selection of some of the best located hotels.

Downtown, the best area to stay in Cincinnati 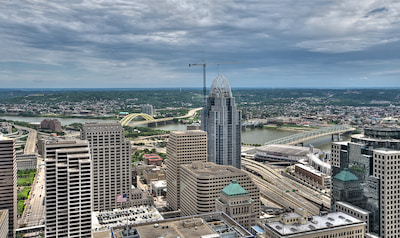 Close to all the action and countless restaurants and bars, the Downtown neighborhood of Cincinnati is the best place to stay on a trip to the city. Those that fancy themselves some exercise can easily stroll across the town in a few hours, making it delightfully walkable. For those that are in a hurry, The Connector, Cincinnati’s electric trolley, can get you anywhere downtown in a mere matter of minutes.

At the center of Cincinnati’s Downtown is the beautiful Fountain Square, crowned with the iconic image of the city, The Genius of Water Fountain. This city block is the epicenter of Cincinnati. A short walk away is the riverfront, crowned by two of the city’s sports stadiums. The downtown area is the perfect neighborhood to stay in for a Cincinnati Reds baseball game at the beautiful Great American Ballpark or for a classic American football game at Paul Brown Stadium.

Other areas to stay in Cincinnati 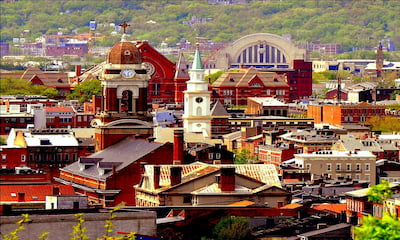 Once one of the most prominent neighborhoods in the Cincinnati area, Over-the-Rhine, affectionately referred to as OTR, is now a modern hangout with endless trendy bars, restaurants, breweries and bakeries. Its name is indicative of its German heritage as the original settlers likened the canal in the southern part of the neighborhood to the Rhine River.

OTR is rich in history and there’s no shortage of architectural wonders and interesting facts to uncover. Highlights in this area of the city include the gorgeous Music Hall, a gothic architectural wonder, Washington Park, and the historic Findlay Market.

Make sure to check out the Brewery District of OTR. Stop in to Rhinegeist, one of the city’s most popular breweries or indulge at Taft’s Ale House, housed inside a renovated cathedral!

This is also a great location to base yourself on a trip to attend an FC Cincinnati soccer match at the brand new TQL Stadium. 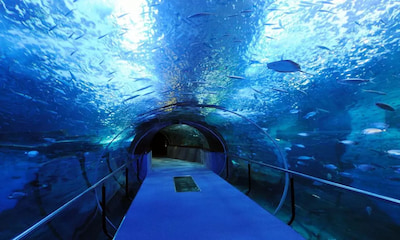 Yet another neighborhood situated on the Kentucky side of the river, Newport is the perfect choice for families that are looking to stay in Cincinnati. Entertainment options abound in this historic enclave that was once known as Las Vegas’ predecessor and was frequented by famous American gangsters in the early 1900’s (Al Capone anyone?!). The neighborhood today is an energetic gathering place for families and a young crowd. Countless festivals are held along the riverfront in Newport including the infamous Glier’s Goettafest, an homage to the famous Cincinnati breakfast staple.

The main draw of this neighborhood is Newport on the Levee, an entertainment pavilion that is home to the award-winning Newport Aquarium, among other activities including a Bowling Alley and Movie Theater. Walk along the levee itself for stunning views of the Cincinnati skyline from across the river. Less than a hundred years ago this geographical boundary was the last obstacle to freedom for enslaved peoples of the southern United States. 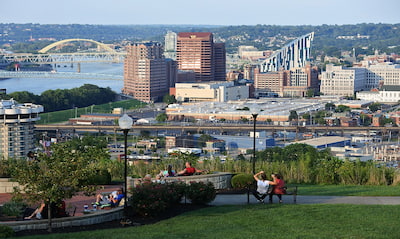 Once an epicenter of German culture in Cincinnati, Covington still retains much of its Bavarian heritage and influence. The Mainstrasse Village is the heart of the neighborhood and there’s no shortage of unique eateries and bars. Don’t miss a stop by Goebel Park to see the iconic German-style clock tower which plays a carillon and mechanical puppet show of the Pied Piper every hour from April to December.

The Covington neighborhood is home to some of the most iconic architecture in the whole of Cincinnati including The Ascent, a 293 foot tall glass apartment building, Cathedral Basilica of the Assumption, and the historic Roebling Suspension Bridge for which it’s said the Brooklyn Bridge was modeled after. If your history itch hasn’t been scratched stop by the Historic Riverfront District to see the statues of famous Cincinnatians including John A. Roebling and a famous female riverboat captain. 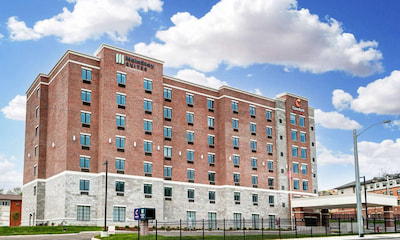 Home to the University of Cincinnati, this college neighborhood is a great place to base yourself for a visit to the Queen City. Most popular with the younger, collegiate crowd, Uptown has been steadily revitalized over the past 10 years with countless new restaurants and shopping areas popping up.

The Uptown and University area of Cincinnati consist of several small neighborhoods such as Clifton and Avondale with the university at its core.

For the history buff be sure to stop by the Clifton Gaslight District, where gas street lamps still flicker by night and historic mansions line the streets. The Henry Probasco House is the most notable residence but the Clifton Public Library is a great place to get a peek inside one of these homes. Be sure to stroll down Ludlow Avenue for enticing local restaurants like Biagio’s Italian and bespoke shopping including Kismet for women’s clothing, Toko Baru for nick nacks, and Torn Light Records. 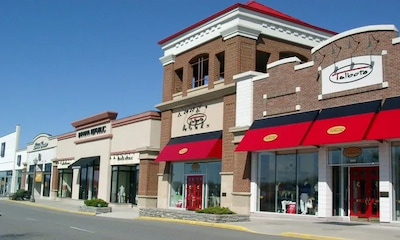 Located about a 10 minute drive from the city center of Cincinnati, the Rookwood neighborhood is a great option for those that are looking for a bit more peace and quiet, away from the hustle and bustle of downtown.

Shopping lovers will enjoy the Rookwood Commons, a shopping pavilion with popular restaurants and stores including REI, Gap, and Joseph-Beth Booksellers, as well as common chain restaurants like The Rusty Bucket, Capital Grille, and P.F. Chang’s. If you’re looking to venture a bit further afield to try a local bite to eat, Green Papaya is frequently rated as the best Thai restaurant in Cincinnati.

The neighborhood’s proximity to the highway makes it easy to get around the city or zip downtown for a business meeting. For those that love to exercise, the newly finished Wasson Way is a 34 mile loop trail with a large portion running through beautiful suburbs and the Rookwood neighborhood.