WHERE TO STAY IN DUBROVNIK, CROATIA 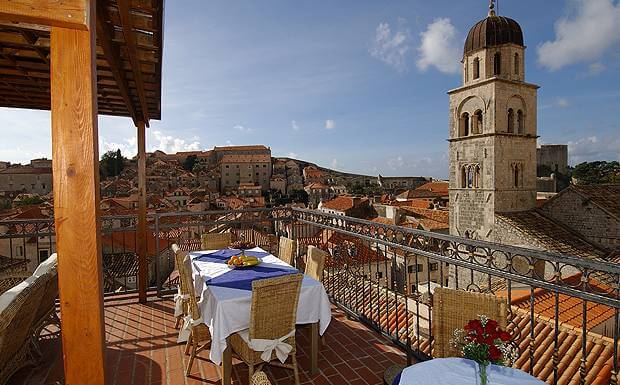 Where is the best place to stay in Dubrovnik?

Often described as a “little piece of paradise on earth”, the beautiful Croatian city of Dubrovnik is a uniquely intact walled city that happens to be one of the most prominent tourist resorts in the Mediterranean. The city is generally small and this makes it a delight for walking around and seeing all the major historic attractions, which have mostly been here since as early as the 15th century. There are also stacks of religious buildings, a variety of interesting museums, gorgeous beaches for swimming and sunbathing, excellent shopping, authentic pavement cafes and brilliant nightlife. Dubrovnik is fast becoming a huge hit with celebrities, so don’t be surprised to see some of the world’s famous stars in the sea or hunting for souvenirs.

Ideally, the best area to stay in Dubrovnik is the Old Town but as there are only 2 hotels in the area, we are actually recommending staying in the closest areas to the Old Town, which are Lapad, Gruz and Ploce. All of these areas are not far from the major attractions and are well connected to the rest of the city as well as having their own tourist attractions, shopping opportunities and nightlife.

Lapad, Gruz and Ploce, the best areas to stay in Dubrovnik This residential suburb is an excellent place to stay in for a number of reasons as it has the vast majority of hotels and hostels in the city, stunning views of the sea, plenty of shops and restaurants and general nightlife as well as a feeling of not being in a tourist ghetto as this area portrays calm and tranquillity.

Everything in Lapad is convenient because this neighbourhood is compact and therefore means anything that you need or want to do will be in walking distance and an even better factor is that you can walk freely without the hassle of vehicles as most parts are pedestrian only. Lapad is also very safe to walk around in, be it day or night and you can enjoy a 20 minute walk to the Old Town or catch one of the frequent buses that head there or to the harbour.

No matter where you stay you will be in walking distance of the sea and Lapad has some of the best beaches in Dubrovnik. The beaches are all close to each other with some sandy and some pebbly, which are beautiful with clean waters to swim in as well as a charming coastal path that takes you around the peninsula and can be exceptionally popular during sundown as well as sunrise. Along the coastal footpath you will get some of the best views in the city and you will also find many cafes and restaurants dotted along it including the Cave Bar, which is actually set in a real cave.

The long main street, which you cannot miss, is where you will find a wide range of shops, bars, restaurants and hotels and has a great buzz about it at night time, when it is superbly lit up. There are supermarkets, pharmacies, book shops, sport shops, souvenir shops, cafes, clothing shops as well as a great range of cuisines on offer though seafood places are a must. Bars usually have live music on and the majority of the hotels and hostels are cheap with the more expensive ones found by the beaches and footpath. The Gruz is another suburb in the city, which is again well connected to the rest of the city including the Old Town as it has frequent buses to it as well as to the airport. The neighbourhood is well known for being safe with next to nothing in terms of crime and has a particular feel of community ties. Gruz is found beneath Mount Srdj, which offers stunning vista of its surroundings as well as a decent workout as it takes an hour or two.

The port area is one of the busiest in Dubrovnik and is where you can board a boat to the Old Town instead of getting a bus or you can go on trips to the nearby islands of Mljet, Elaphiti, Sipan and to even cities like Split along the coast and even Bari in Italy. The main street is found by the water and this is home to various shops that sell food, clothes, cafes, souvenirs, pharmacy, bakeries, tourist agencies, rental cars and there is even a department store with designer brands inside.

The same road is also home to a vegetable and fish market and there are some of the best restaurants in the city, which have the freshest seafood that have been caught in the morning. The hotels are mostly found by the harbour and the majority are decent quality with their own restaurants that serve foods from all over the world. This neighbourhood is the closest of the three to the Old Town, which is only a 5 minute walk, but there are buses there too. Ploce happens to be one of the most attractive areas of the city with some of Dubrovnik’s most luxurious hotels positioned along the pebbly Banje Beach.

Ploce is also the nearest area to the airport and is one of the safest neighbourhoods in the city and these reasons make it even more ideal to stay in. The main street in the area is full of shops, restaurants, cafes and bars, though you are spoilt for choice as the Old Town is very close.

The Old Town is where you will find all the major attractions like Rector’s Palace, Orlando Column, Church of St. Blaise, Jesuit Monastery, Sponza Palace, Onofrio Fountains, the Cathedral, Maritime Museum, the Ethnographic Museum and the cable car, which gives you the best views. The main street in the Old Town is Stradun, which is where you find shops, cafes, restaurants, bars and hotels.