WHERE TO STAY IN FLORENCE 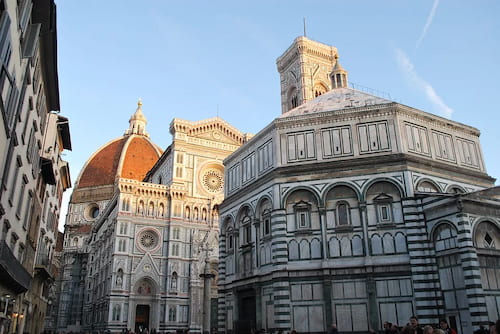 Which is the best area to stay in Florence?

If you want to be near to the major sights of the city, the best area to stay in Florence is the historic centre. This means you’ll be within strolling distance of the Florence Cathedral (The Duomo), and you can easily reach the Piazza Della Signoria, around which many of the major museums and galleries are situated. In this area, you’ll find antique shops, cafes, and restaurants. You’ll also be close to the Ponte Vecchio, a medieval bridge that takes you to the other side of the Arno River. The Santa Maria Novella train station is a 10-15 minute walk, and you’ll find the bus station close by.

With winding narrow streets, world-class art and wonderful Tuscan cuisine, Florence is a city that tourists flock to from all over the world. This is the birthplace of Renaissance art, where art lovers can feast upon works by Botticelli and Leonardo da Vinci, in the beautiful surroundings of famous churches and galleries. While you’re there, why not wander around the Cattedrale di Santa Maria del Fiore, or contemplate the statue of David in the Galleria dell'Accademia. Whether you’re marveling at the paintings in the Uffizi gallery, or gazing out over the terracotta rooftops from the Piazzale Michelangelo, this UNESCO World Heritage Site is sure to capture your heart.

The city of Florence is administratively divided into 5 “Quartieri”, of which the 1 represents the historical part of the city centre. The other quartiers are: Q2, known as “Campo di Marte”, Q3 “Gavinana-Galluzzo”, Q4 “Isolotto-Legnaia”, and Q5 “Rifredi”.

During more recent years, due to the expansion of the city of Florence, also San Lorenzo and San Marco-Santissima Annunziata have been added to the quartiers included in the city centre. Santa Maria Novella is one of the four historical quartiers of the city of Florence. Home of the Central Station, named after the quartier, the area ensures any tourist a place to stay and a comfortable opportunity to reach any other part of Tuscany or Italy with the train.

Staying in the neighbourhood can ensure a pleasure experience since this area is also known for the variety of hotels and monumental beauties like the Basilica and important museums, just like the Museo Novecento, Museo Marino Marini and Palazzo Strozzi.

Not a museum goer? No problem! Santa Maria Novella is also the quartier in which you can quench your thirst for shopping the best, as Via de’ Tornabuoni is one of Europe’s most famous fashion streets. Not in the mood for shopping? Santa Maria Novella will appeal to you anyway, as anything can be reached within walking distance. Strolling through the streets of the San Lorenzo district is like walking in balance on a suspended thread between the majesty of the monuments wanted and built by the Medici and the simplicity of the stalls and historic places, without the risk of falling.

A stone's throw from the centre (from Piazza del Duomo it will take you less than a hundred steps to reach it), nestled between the busy area of the Santa Maria Novella station, the elegant via Cavour and via de’ Cerretani and the dynamic via Nazionale, the district of San Lorenzo is one of those places where you can spend an entire day, walking in its alleys, shopping at the market, tasting some typical products and admiring the artistic wonders.

Staying in this quartier can surely make you feel like an authentic Florentine person, still enjoying touristic perks. San Marco is home to the Accademia’s Gallery, where you can admire Michelangelo's David and the Museum of San Marco, known for the frescoes by Fra’ Angelico. Another spot to mention is the Opificio Delle Pietre Dure. This museum will tell you everything there is to know about the art of sculpture and marble in general.

Dotted with medieval and Renaissance palaces, there is also the University of Florence, known for being one of the oldest in Europe and characterized by the presence of botanical gardens. In the surroundings, welcoming restaurants and taverns attract an eclectic clientele. At the same time, on Via Ricasoli, you can find great ice cream shops.

Due to the presence of the University and high schools, the quartier has more eclectic and youthful energy than the others, representing then an excellent choice for a place to stay for those young travellers that like to blend with the locals. As one of the four historical quartiers, Santa Croce will amaze you with its artistic treasures and leisurely intense dinners and Aperitivo’s. In fact, while its strength is undoubtedly the artistic heritage, Santa Croce can be a delightful place where to have an exquisite meal, with a wide choice of typical and more sophisticated restaurants.

It’s surely the place to stay in when in Florence, with plenty of liveable spots to have drinks with a young vibe. Besides the Basilica di Santa Croce, called “the Temple of Italian Glories” because some big names from the past have been buried inside, the quartier is home to museums, restaurants and bars that will appeal to any palate.

Talking about the area, we cannot exclude one of the most important traditions of Florence that are held precisely in the square “Piazza Santa Croce”: the Historical Football (called “Calcio Storico Fiorentino” in Italian). The quartier is known amongst locals and tourists as one of the most authentic places to live or stay in, with its street markets and its “Movida” (Italian for nightlife) after the sun sets. The main square, again named after the church that also gives the name to the quartier, starts to fill after artisanal shops, art boutiques, and galleries close, leaving the scene to restaurants and cafes, often with outside space.

Within walking distance to Ponte Vecchio and Palazzo Pitti, which amazes with its unique Giardino dei Boboli, Santo Spirito will make you feel included in the Florentine beauty from the first day of your stay. The streets full of people during the day and in the evenings will make it a perfect place to meet new friends and exchange ideas. Campo di Marte is an area called Quartiere 2, located east of Florence’s city centre, and is mostly of recent construction. During the nineteenth century, the quartier was laid out for the specific purpose of training Tuscan soldiers. After the war, the whole area was converted into a multi-sports centres area.

But besides the sporty-soul of this quartier, you can also find a series of palaces in Liberty style and Villas from the sixteenth century, just like Villa Favard, that will make you fall in love. Campo di Marte, despite having fewer historical sites and attractions, can be a perfect place to stay in for a sporty tourist that maybe wants to combine sleeping well at night and doing sports during the day, without giving up sightseeing whenever possible.

The historical city centre, in fact, is reachable within 15 minutes with public transport and 30 minutes on foot. The quartiers of Careggi and Rifredi are a really strategical place to stay in when visiting Florence by train or car. In fact, the area can count on the second most important railway station, Firenze Rifredi, and plenty of cheaper (or free) parking areas.

The railway station is well-connected with other parts of Tuscany or Italy. Situated north of the historical city centre, the quartier of Careggi is best known locally for being the home of the majestic Hospital, one of the biggest in Italy.

Rifredi, instead, is pointed with imponent Villas tracing back to the Medici period, as well as ample beautiful parks through which stroll and relax. Without a doubt, then, the Quartiere 5 is a great choice to stay in for tourists searching for peace of mind when arriving by train or by car. To reach the city centre, you are looking at 20 minutes by public transport and 50 minutes walking. The Novoli quartier, together with the San Donato quartier, represent one of the newest residential areas of Florence. Built during the Italian real estate development boom of the ‘50s and ‘60s, the neighbourhood is home to many pleased residents.

This quartier is the closest to the city’s airport, and it’s then suggested for travellers that fly directly to Florence and that rent a car to see then Tuscany as a whole.Just imagine the comfort of having to drive only for 6 minutes from the airport to Novoli.

As a small city within a bigger city, Novoli and San Donato have been equipped with all kinds of services, like restaurants, bars and gyms, as well as transportation solutions. In fact, within only 20 minutes of Tramvia (Florence’s tram), you can reach the historic city centre. The massive Parco San Donato provides an excellent spot for walking and relaxing right in the middle of apartment buildings.