WHERE TO STAY IN GLASGOW, SCOTLAND 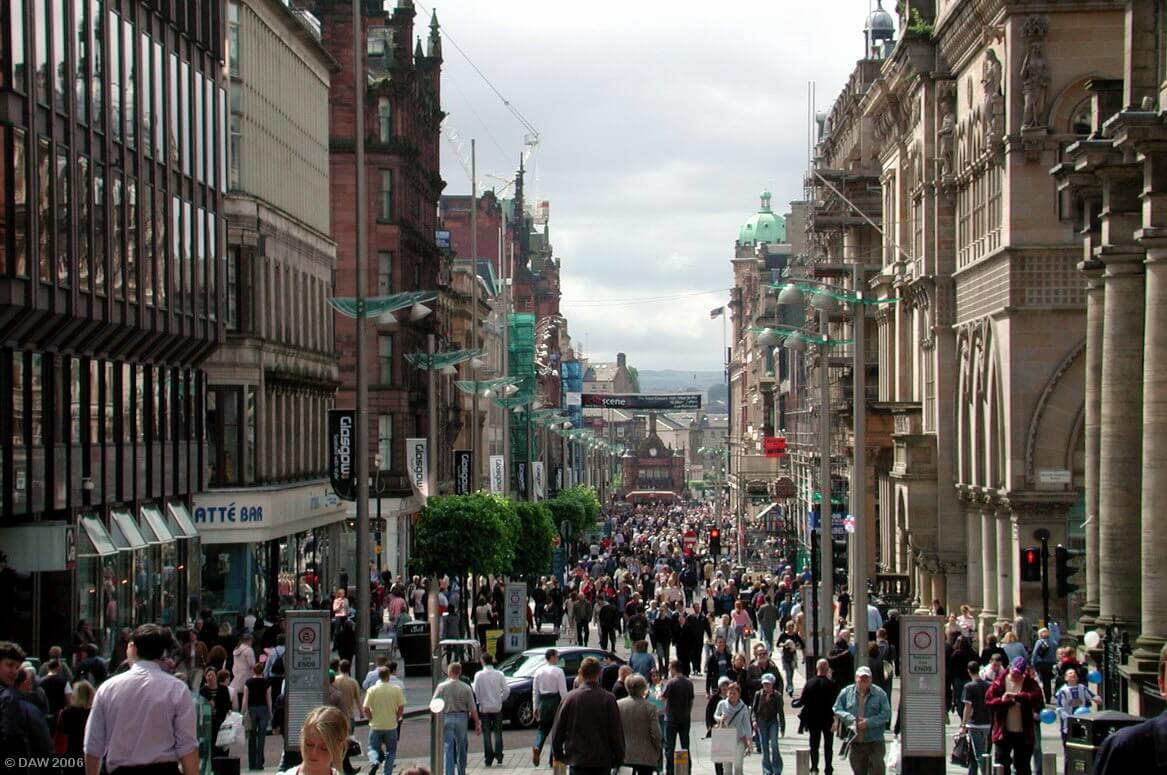 Where is the best place to stay in Glasgow?

There are lots of words that could describe the biggest city in Scotland as it is fantastically diverse from one area to the next. A lot of people say ‘think of Manhattan but with a Scottish accent’ and you get the idea as it brims with some of the finest architecture in the land and challenges London for the ultimate shopping and dining experience. The city used to be full of old warehouses and run-down Victorian houses but has been transformed into one of the most aspiring cities in the world today.

Like most cities, the best area to stay in Glasgow is the city centre, which has the most exciting modern and traditional attractions on its doorstep. The main focal point is George Square and many visitors like to start from this area as it is surrounded by important religious buildings that ooze Victorian and Edwardian styles. There are also numerous excellent art galleries, informative museums, lovely parks and has the best collection of restaurants, nightlife and hotels.

City Centre, the best area to stay in Glasgow 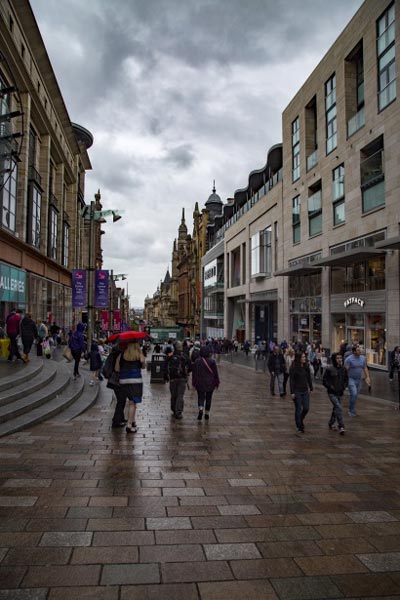 The city centre is easily divided by the motorway road to the north and west, the River Clyde to the south and the University of Strathclyde to the east. This area contains the majority of the tourist sights, which is the main reason why this part of the city is perfect for any visitor. In the heart of the city you will find many 19th and 20th century buildings that are of Edwardian and Victorian styles, which surround the main central square, George Square.

The square has several statues and monuments that are dedicated to famous past leaders and other popular figures and this is where the imposing City Chambers is found. This magnificent Italian Renaissance place is the headquarters of Glasgow City Council but there are tour guides to take you around to see various rooms like the lobby, debating chamber and banqueting halls.

Another pinpoint of medieval times is the Glasgow Cross, which is a clock tower that marks the spot where the original city center used to be. The Glasgow University is the fourth oldest in the UK and was founded in the mid 15th century, which has stunning grounds and is home to the Hunterian Museum and Art Gallery.

There are many brilliant museums in the city and if you were to see every one of them then you would be here at a very long time. The best ones include the Gallery of Modern Art, which houses many a great collection of modern paintings and other forms of art like sculptures. The Glasgow Science Center is a huge complex that has fun and interactive science exhibits for all the family and is where you will find the only tower in the world that can spin the full circle from its own base.

The grandest of the Museum is the Kelvingrove Museum, which has various artifacts on the history of Scotland to the Ancient World. There are even the works of Monet and Van Gogh that are on display as well as other celebrated artists from the country. Other art galleries to check out the Street Level Photoworks and Transmission Gallery, who promotes the local photographers and artists with regular exhibitions at each place.

For shopping, the St Enoch Center is one of the largest malls in Europe, which sells lots of items from electronics to kid's toys and The Bars is the next best thing with heaps of street stalls and the experience is certainly unique. There are a couple of greens in the city center that are perfect for sitting down and watching the city life go by and the main 'Green' usually has concerts, movies and festivals planned. However, if it is music that you are after then you will find plenty of it as the city is very famous for its music scene and the best venues tend to be 'The Barrowlands', 'King Tut's Wah Wah Hut' and 'Stereo' .

The city center has much going on at night with live music, various theaters that are old and new and in particular 'The Citizen's Theater' is one of the most famous in the world. There are a load of cinemas that play the latest films and there are a decent amount of comedy clubs and 'Jongleurs' is one of the most popular in Glasgow.

There is an excellent and dynamic range of restaurants in the city, though the city is famous for its curries, so if it's something you enjoy then try it and if there are not many cuisines including Chinese, European, Japanese and American. In Scotland, the distance between you and a pub or club is probably only a maximum couple of meters at best and therefore you are spoiled for choice.

The same is said for hotels and there are a good cluster of four and five star places in the center that provide excellent views over the city and are used much by famous personnel.

Other neighborhoods to stay in Glasgow 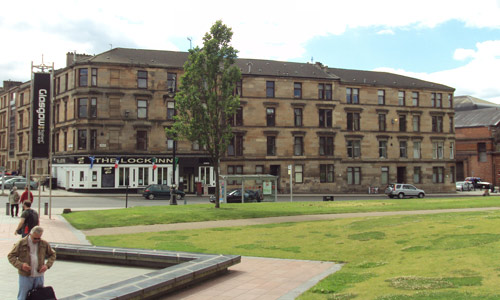 Glasgow’s West End is home to the University of Glasgow one of the oldest in the world. The West End is quirky, vibrant and Bohemian in character and is a really fun part of the city to stay. The West End has a great choice of hotels including the Argyll Western and Hotel du Vin and also numerous comfortable guest houses to suit all budgets. West End is a good place to stay as there are numerous train connections into the city centre.

West End is a little quieter than the city centre and its main focus is Byres Road and the surrounding areas of Hillhead and Dowanhill. This part of Glasgow is known for its lovely architecture, quaint shops and cobbled streets. Places of interest in West End include Kelvingrove Park, the Botanic Gardens, Kelvingrove Art Gallery and the fascinating Police Museum.

The cobbled street of Ashton Lane is full of great pubs, restaurants and this part of West End has a good night scene with theatres, cinemas, comedy clubs and some good pubs to enjoy a nip of whisky! 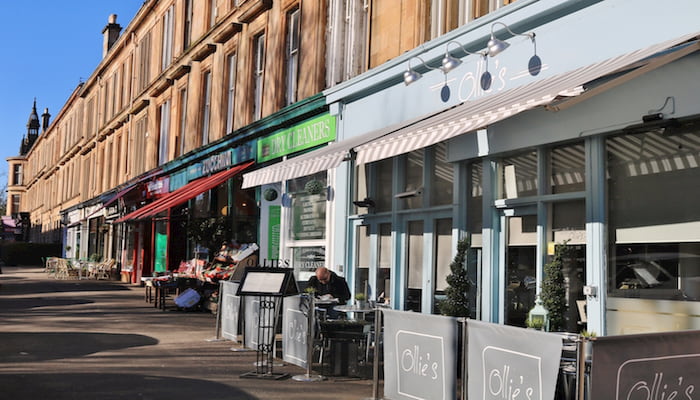 South Glasgow is the part of the city that lies south of the Clyde and is a bustling urban retreat. South Glasgow is the perfect place to stay and is great for families as it has plenty of local attractions. South Glasgow has great accommodation ranging from the Sherbrooke Castle Hotel which is a popular four star to budget friendly hotels like Number 10, the Village Hotel and Crosshill Hotel.

South Glasgow is a good area to stay as getting into the city centre is quick and easy but there are local distractions! Bellahouston Park is fun for all the family with a play area, Alice in Wonderland maze and walled garden. There is the M & Ds Theme Park and Xscape Braehead and Pollock Country Park is the city’s largest. South Glasgow is a good choice if you enjoy a modern drinking and food scene and during the day, the area’s café scene simply buzzes. Enjoy a warm welcome in South Glasgow.