WHERE TO STAY ON THE ISLE OF MAN 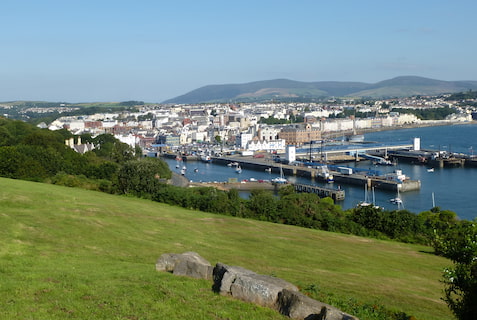 Which is the best town to stay on the Isle of Man?

The Isle of Man is halfway between England and Ireland, in the middle of the Irish Sea, and has good flight and ferry connections to both places. A natural paradise famous for its stunning mountains and coastline, its high-octane motorcycle races, great seafood, golf courses and rich Viking and Celtic history. It’s drawn in visitors in their droves since the late 19th century, is a financial hub and popular with outdoor sport enthusiasts.

The island’s eastern capital, Douglas, is the biggest city, main commercial centre and where many hotels are based. An attractive coastal location, with lots of restaurants and bars. It’s a good place to stay if you want a lot of life by day and night. The North and West, in places such as Ramsey and Peel, are quieter, but boast wonderful hills and mountains nearby in easy access, along with lovely beaches and historic sites. Good for a more relaxing break.

The island’s south, including places like Port Erin and Castletown, are home to some of the nation’s most beautiful beaches. A hive of activity in the summer months with events for all the family. The stunning coastline attracts many hikers, while sea life spotters keep an eye out for dolphins, seals, and basking sharks.

Best towns to stay on Isle of Man The island’s capital is home to a stunning sweeping bay and three-kilometre promenade, which is shrouded my hills on either side. It’s the busiest place on the island full of great drinking and dining options, the island’s National Museum, its biggest music venue - the Villa Marina – and the Gaiety Theatre. It’s also the island’s main retail and business hub, and is home to the nation’s parliament building and only casino.

It has an attractive marina full of yachts, with waterside restaurants alongside, and events all year round – including street markets, concerts and motorcycle displays. The city is where the world-famous TT races begin every year and motorcycle fans flock to its grandstand to see riders set off around the island at speeds of over three hundred kilometres an hour. The island’s only ferry terminal is based in the town with direct links to Liverpool, Belfast, Dublin and Heysham. The coastal village on the island’s south-west corner is home to a stunning beach and bay which rivals any around Britain. The white sandy beach is popular with families, and the imposing hills surrounding it draw in many thousands every summer. The bay’s water, which is abundant with sea life, is a favourite with paddleboarders, kayakers and swimmers. In recent years it’s seen a number of cool new business open including a winery, a restaurant which prides itself on using foraged goods and a bar with deck chairs on the sand.

With beautiful hills all around the bay it's a popular location with hikers and on the island’s 100-mile circular coastal route. The island’s historic steam train terminates here and has direct, but leisurely paced, connections to Douglas and the rest of the south. It's also only a ten-minute drive or bus to the airport. A wonderful place to soak up the island’s laid-back pace of life. Castletown is the biggest conurbation in the south of the island, directly next to the nation’s only airport. It also has an impressive sweeping bay and long sandy beach, which leads to a stunning golf course on Langness Peninsula. The town is one of the island’s most historic and is home to the medieval Castle Rushen, one of the best-preserved medieval castles in Europe. The site also has a museum and education centre attached. The historic streets and alleys have lots of colourful old fishing houses and nearby is the grand King William’s College, which dates back to the early 1800s.

Castletown has a number of decent drinking and dining options and steam railway links to Douglas and the rest of the south. A popular place to stay for families, along with those with a keen interest in history. The close proximity to the airport, which has regular direct links the UK and Ireland, is also an attractive feature. Another beautiful coastal city, which is steeped in history. Like Port Erin it has a gorgeous white sandy beach, attracting many families, and is surrounded by lush green hills. A key attraction is Peel Castle, initially founded by the Vikings back in the 11th Century. Meanwhile, the local House of Manannan museum celebrates the island’s Viking, Celtic and maritime heritage. The city is at the heart of the island’s fishing industry, and you can find great seafood at the local smoke houses, cafés and restaurants.

It’s an area popular for its water sports, and you can see many paddleboarders and kayakers out in the water on a sunny day. It also has one of the island’s largest marinas – full of yachts and fishing boats. The area is well served by bus routes to Douglas and other parts of the island, about a 20-minute drive to the airport and the island’s capital.

Ramsey, the island’s second-biggest town, is situated in the north of the island and in the shadow of the island’s largest mountains, which separates it from Douglas. It’s perfect territory for hiking and mountain biking, with dense woodlands rising up towards Ramsey’s south. Like much of the island, it has a long sandy beach and promenade walkway lined with guest houses and a few hotels. It also has a park, small lake and nearby attractions which are popular with families. The town centre is home to the island’s only gin distillery and has a number of pubs and eateries lining its small dock.

It’s a great place to stay to explore the island’s northern plains, while also having easy access to the nearby mountains. It’s not quite as well-connected as some other parts of the island – taking 45 minutes to get to the airport in a car and 25 minutes to Douglas and its ferry terminal.