WHERE TO STAY IN MAURITIUS 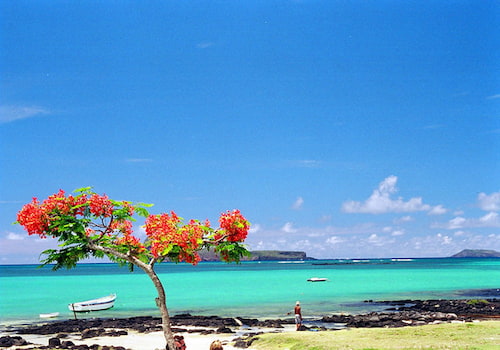 Which is the best area to stay in Mauritius?

The idyllic and tranquil island of Mauritius, in the Indian Ocean, is famous for having some of the best beaches on earth, miles of picture-perfect sands, surrounded by crystal clear waters and luxury hotels. It’s a paradise island with immense natural beauty, bucket loads of instagrammable locations and top restaurants and attractions. The epitome of relaxation, which is often featured on the front cover of “must visit” travel magazines.

Some of the most popular places to stay are in the north, including the busy Grand Baie and Trou aux Biches – where stunning beaches are mixed with night-time entertainment and busy eateries. Here there are an array of luxury resorts and boutique hotels set among a number of coves and inlets.

The west and eastern coasts have much longer stretches of sand, which run for miles along either side of the island. Again, these areas are lined with many top resorts and large hotels. Some of the top picks are Flic en Flac in the west and Belle Mare and Trou d’Eau Douche in the east. Meanwhile to the south you’ll find the more rugged and wild locations around Le Morne and its Brandbant Mountain – which offers a completely different escape on this stunning island.

Best places to stay in Mauritius 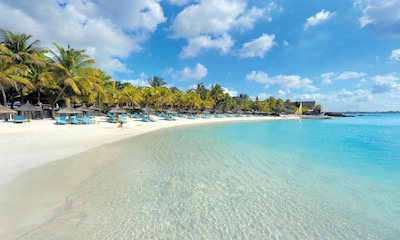 Grand Baie is a village at the north western tip of Mauritius, famed for is white sandy beaches and crystal blue waters. This tranquil, palm tree lined waterfront and collection of stunning lagoons, are surrounded by lots of tasty places to eat and drink and it’s often seen as one of the most popular parts of Mauritius. It also has a reputation for being the island’s nightlife capital, with its biggest and busiest nightclubs found within this corner.

Its shores are dotted with luxury resorts looking out across the waters, which are popular with water sports lovers, and it’s well served with amenities – be it for a locally made souvenir or browsing major international chains. The perfect place to soak up the beauty and elegance of this paradise island, while also finding life by day and night. An hour and a half drive to the island’s airport. 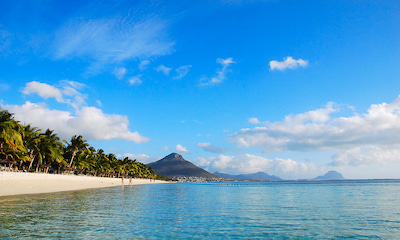 This area sits in the middle of the island on its western coast and boasts thirteen kilometres of stunning, unbroken sands, lined by a coral reef. Not quite the same level of development as Grand Baie, which gives it a more relaxed feel. It is, however, still awash with top hotels, which have direct access to the area’s beaches and a bustling nightlife. The area’s stunning natural beauty and coral reef make it a haven for sea-life and snorkellers, meanwhile nearby you can find the Casela Bird Park, which has 140 different types of birds.

The area’s large resorts are well connected by bus routes to other parts of the island, including its biggest town - Port Louis - which is 45 minutes away – and only an hour to the city’s airport. In the shadow of nearby mountains, this is an incredibly relaxing spot to make the most of the island’s famous beaches. 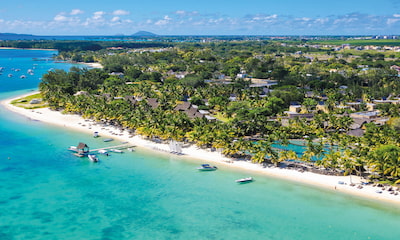 This area is very close to Grand Baie in the north-west tip of the island, just a little further south, in the next bay along. Like Grand Baie it boasts a stunning beach, which has been named as the island’s best in years gone by. Here you can find good quality boutique hotels and larger resorts, which look out across the ocean and provides one of the best spots to watch a sunset in Mauritius. It’s also a cracking spot for golfers, with a number of local golf resorts based nearby, over-looking the water and surrounded by beautiful gardens.

The village is only 15 a minute drive to the larger Grand Baie, with its many night-time attractions and restaurants, so you can make the most of both worlds by staying here. Another excellent place to pass your time away on the beach, an hour and 15 minutes away from the airport and with great hotels too. 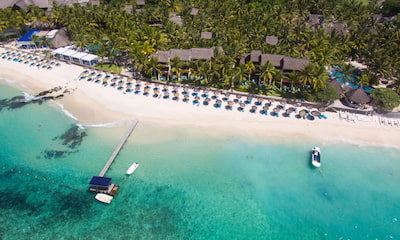 This village sits on the eastern coastline of Mauritius and is mainly made up of large beach resorts, many of which have private sections of sand for their guests. It’s one of the longest stretches of beach on the whole island, with the typical crystal blue waters found on the island and surrounded by lush vegetation. It’s another spot which is a favourite for water sports lovers and there are many locations to rent jet skis and the like.

Like in Trou aux Biches, there are nearby, waterside golf courses and also a busy local market which sells fruit and vegetables, clothing, souvenirs and craftwork. Another decent location to base yourself on the island, but slightly less busy than its western neighbour. With an array of hidden coves, it’s a fantastic place to explore by sea. 1 hour away from the airport by car and 50 minutes to Grand Baie. 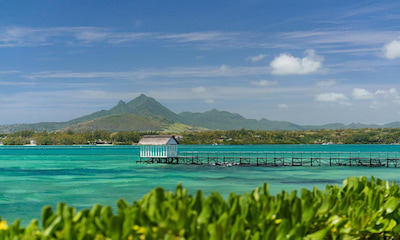 Another destination on the island’s eastern coastline, just a little further south from Belle Mare. The layout of this part of the coast includes tens of inlets, with small sandy beaches and a much wilder, less developed, feel to the area. Like most of the island, however, there is an array of great places to stay – from three-star hotels, to 5-star luxury resorts. It’s also a centre for the island’s fishing industry, where top class seafood can be found and you can still see many fishermen heading out into the clear blue waters every morning.

It’s also a main gateway to the nearby Ile aux Cerfs and Ilot Mangenie, two beautiful small islands off the main coast of Mauritius, which are popular with snorkellers. A 50-minute journey to the airport by car or bus, and 40 minutes to the biggest town, Port Louis. 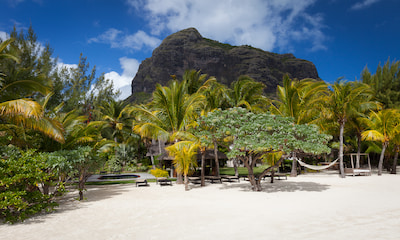 This south-western peninsula is far wilder that the other areas mentioned. It’s shaped by large dramatic cliffs, caves and a vast hillside, called Brabant Mountain, which was named as a World Heritage site in 2003. Due to the area’s topography, it lends itself to great hiking options, with trails going along the coastline and over the central mountain. A favourite with outdoor sports enthusiasts visiting the island, it also boasts a number of luxury resorts and a nearby golf course.

Here feels more remote than the other areas mentioned, but still offering an array of good beaches and beautiful, inviting waters. An hour and ten minutes from the island’s airport by car or bus and an hour and a half drive to the northern most Grand Baie. Definitely worth visiting if you’re a nature lover and want to get out exploring more, rather than just relaxing on the beach.