WHERE TO STAY IN MENDOZA

Where is the best area to stay in Mendoza?

The best area to stay in Mendoza for tourism is the historical centre. It´s an area which is framed by the Plaza de la Independencia, the city´s main square which can be found in the centre of four other squares, all worth visiting, which are the Chile, Spain, Italy and San Martín squares. In this area you will find the pedestrian Sarmiento Street along with the Arístides Villanueva Avenue where you can find the city´s best restaurants, bars and nightlife. A bit further out you will find the Las Heras street or the San Martín Avenue which are the city´s main shopping streets.

The Plaza de la Independencia has a very interesting crafts fair and is the starting point for tours around the city. From here you also be able to explore the General Ricardo Park or the Cerro de la Gloria (Glory hill) which boasts some of the city´s most amazing views.

On top of all of that, you can book daytrips in the centre to other places around the city. Among the most popular are guided tours to the region´s traditional bodegas and vineyards or trips to see the Cerro del Aconcagua viewpoint, America´s highest peak at 6959 meters, from which you will be able to access the Horcones Laguna and the Provincial Aconcagua Park.

On the map, which shows the most convenient area to stay in Mendoza, you can see a selection of some of the best located hotels.

Staying in the outskirts of Mendoza 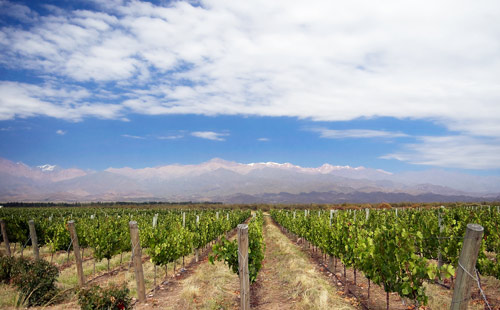 If you don’t want to stay in the city centre and wish to find quieter accommodation among vineyards or olive groves, you don’t have to go far. The main winemaking centres of the region can be found only 20 minutes from the capital.

• Chacras de Coria: located just 20 minutes from the centre of the capital, the town of Chacras de Coria, is an ideal base for visiting the region. Its tree-lined streets are ideal for cycling and the quality of its restaurants are the aspects most appreciated by visitors.

• Lujan de Cuyo: already in the wine region, Lujan de Cuyo, is the ideal place if the purpose of your trip to Mendoza is to visit the vineyards and wineries. Located 20 km from the capital, it’s closer to the vineyards but doesn’t have as wide a range of hotels as in Chacras de Coria.