WHERE TO STAY IN MONTENEGRO 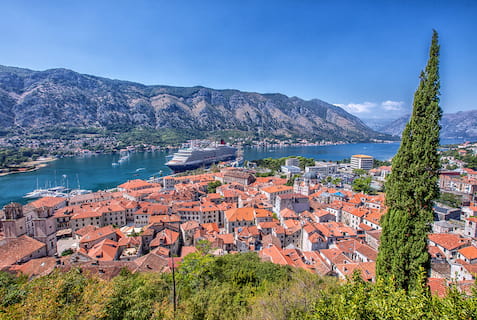 Where are the best places to stay in Montenegro?

Montenegro is a country full of breath-taking beauty. The small nation is largely mountainous and its stunning high peaks work their way down to the highly sought-after Adriatic Coast. With historic fortified towns, beautiful beaches, wonderful hiking routes and lively drinking and dining culture, it rivals any nation in the south of Europe. With luxury resorts, boutique hotels and postcard perfect scenery, it’s fast becoming one of the “must visit” nations on the continent.

The country’s main draw is the dramatic coastline, which runs from the Albanian to the Croatian border. Along this 300 kilometre stretch there are many beautiful resort towns, which teem with history and are surrounded by stunning mountains, along with impressive beaches and secluded coves, including Budva, Bar, Petrovac and Ulcinj.

To the northern end of the coast, you have one of the most jaw-dropping locations in Europe – the Bay of Kotor, which resembles a mountainous Norwegian fjord, but with Croatian weather. It’s around this bay you can find the stunning fortified town of Kotor, along with Tivat and Herceg-Novi. Meanwhile, further inland, not far from Lake Skadar which borders Albania, you have the nation’s bustling capital Podgorica.

Best places to stay in Montenegro 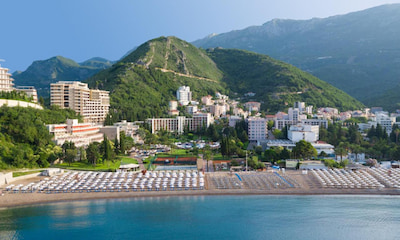 Budva is the most popular destination on the Montenegrin coastline, offering miles of beautiful beaches and bundles of history, alongside thumping nightclubs and top restaurants. The destination has been coined the “Montenegrin Miami” due to the amount of life which flows out of the town in the summer. Its long sweeping bay is lined with many hotels and resorts, along with buzzing bars and beach clubs.

But it doesn’t lack history either – it’s Old Town, Stari Grad, dates back to the Middle Ages, and its town walls are still complete, with narrow alleyways winding their way around inside, lined with boutiques, bars and cafes. The town is surrounded by mountains, perfect for hiking, and the town boasts an impressive marina, full of large yachts.

Budva is only 30 minutes’ drive from Tivat Airport and an hour from Podgorica. The perfect location to find your feed in this stunning country. 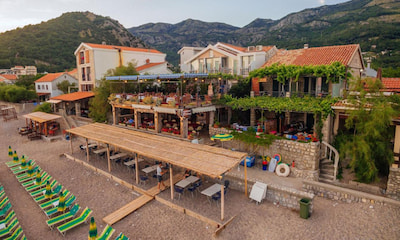 Petrovac is Budva’s more laid back and tranquil neighbour, just 18 kilometres south along the coastline. The main attraction here are the gorgeous beaches, which are shrouded by mountains, like most of the Montenegrin coast. Although a little more laid back, it certainly doesn’t lack wonderful places to eat and drink, with many restaurants and bars along the sea front and within the town itself.

Petrovac often attracts families due to its calmer atmosphere compared to the buzzing Budva and there are many water sports activities available for kids and parents alike. The area also has a rich history and there are many impressive historic buildings dating back to Roman times, and you’re in easy striking distance to many other small coves and beaches along the coastline.

The resort is 50 minutes’ drive to the airport at Tivat, the same distance to Podgorica’s and only 30 minutes to the port at Bar. Bar is a large town further south along the coastline from Petrovac. It’s home to the main port in Montenegro and has direct ferry links to Italy on a regular basis. As a result, it’s a major centre for trade in the country and boasts a number of popular markets with goods coming from all around the region and further afield.

Although the town doesn’t quite have the same wow factor as Budva or Petrovac, which have mountains crashing down to the sea right by the town, it does still have an impressive beach and many beachside hotels. The mountains are within easy striking distance and you’re also closer to Lake Skadar if you fancied a different day out from the beach.

The town has many places to eat and drink along the coastline and a short drive or bus journey, both north or south, takes you to many beautiful coves to explore. 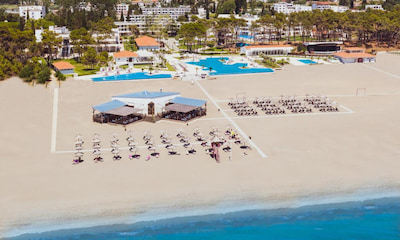 Ulcinj is the coastal town furthest south on our list, close to the Albanian border. It’s enormously popular with tourists from its neighbouring country, who come for the beach and party scene in the summer. In fact, the town has a majority Albanian population and you can get a flavour of two nations within one in this busy seaside resort.

It’s full of affordable hotels and guest houses, and it comes alive in summer with people arriving for its buzzing, beach clubs and restaurants. It also has an impressive Old Town, with cobbled streets and eateries overlooking the crystal blue waters of the Adriatic. The surrounding coastline is popular with wildlife enthusiasts and is one of the most significant locations in Europe for birdlife, with 240 different kinds spotted in the area.

With beautiful nature all around and only a short drive to Albania, it’s a great location to base yourself to explore two countries at once.

One of the most dramatic and impressive landscapes in the south of Europe. This 16th century fortified town, now a UNESCO World Heritage site, sits at the end of a stunning, almost entirely enclosed bay, surrounded by enormous mountains. It has a likeness to a Norwegian fjord with peaks higher than 1,700 metres dropping straight down to calm waters in the bay.

It’s very popular with hikers due to the number of challenging hiking trails in the surrounding mountains, which lead through stunning national parks. The tranquil waters of the bay are also popular with water sports enthusiasts, with paddleboarding, kayaking and boat trips available. The Old Town is a wonderful network of tiny alleyways packed with tasty restaurants, cafes, bars and boutiques.

Sitting above the Old Town is a fortress sitting high up on the mountain top, looking down over the bay. Kotor is the kind of destination which lasts long in the memory.

Sitting further around the Bay of Kotor, on the Adriatic facing side, is Tivat. It’s home to one of the country’s biggest airports and the grand Porto Montengro, full of large yachts. The area has seen a lot of development in recent years and is now full of high-end restaurants, wine bars, cafes and boutiques. The area has become one of the most glamorous locations in Montenegro, with a likeness to the high-end locations on the French Riviera.

Another stunning location, with large mountains to the town’s rear and many hiking and mountain bike trails in the surrounding countryside and forests. It also has a number of decent beaches and many opportunities to take to the bay’s waters. While Kotor Old Town is quaint, Tivat is now becoming fancy and with both locations only being a 15 minute drive from each other, you can get the best of both worlds.

The local airport has daily flights to international destinations. 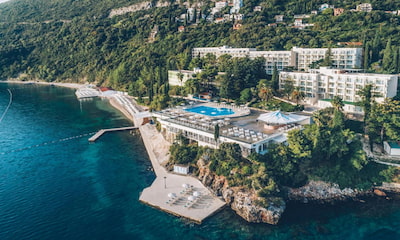 Herceg-Novi is the most northerly destination on our list and is placed within touching distance from the Croatian border. The town sits at the entrance to the stunning Bay of Kotor and within 5 minutes from the beaches of the Adriatic. Like many locations in this wonderful country, it has an impressive Old Town, which sits on a hillside looking down towards the bay.

Its historic strategic importance, at the entrance to the bay, means it also has many other historic monuments and buildings dotted around the town. There are many waterside hotels and guest houses, alongside the area’s many pebble beaches and thousands of people are drawn here every year for its relaxed coastal atmosphere.

It’s well served with tasty eateries, bars and cafes, plus it’s perfectly placed in in the region - only an hour’s drive either way to Kotor or the world famous Durbovnik in Croatia, if you wanted to sample a slice of Croatia too. The bustling capital of Montenegro is by no means as attractive as its coastal counterparts, but it has a lot of life and is certainly worth a visit. It’s the central hub for transport in the country, so many international flights and bus connections come through the nation’s capital. It has a lively café and nightlife scene and a very interesting mix of both modern and old architecture.

It’s also a central hub for cultural attractions in the country – with the nation’s major theatres, concert venues and football stadium also based within the city. It sits, just inland from the northerly most point of Lake Skadar, so is a great place to base yourself to explore the lake’s shores, while also close to the mountains around.

Due to its capital status the city is full of popular chain hotels, along with budget alternatives.