WHERE TO STAY IN MONTREAL 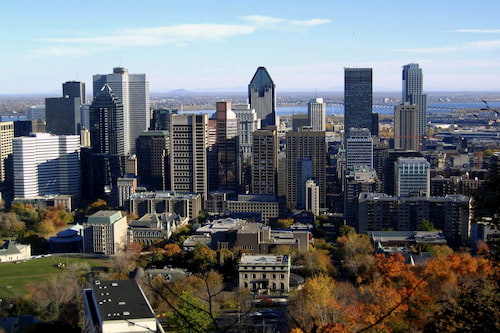 Which is the best area to stay in Montreal?

Montreal is the second largest city in Canada after Toronto, and it is also the city with the largest percentage of French speakers, after the city of Paris. Home of the Cirque du Soliel, Montreal is an exciting place to stay because of its many festivals and events going on all year round. It offers fascinating attractions, outstanding French architecture, delicious cuisine, and a rich culture. It is even a great place to stay for winter fun, such as ice skating, sledding, and skiing. And with its underground city that runs along the metro line and houses businesses, shops, restaurants, and concert halls, you don’t even have to go outside if it’s too cold!

The best area to stay in Montreal is the historic district of Old Montreal, which was a French settlement in the 17th century and still retains some of the architecture of that time period. Because it spans an area of only 0.4 square miles, it is easily visited on foot, bike or even horse-drawn carriage, if that fancies you. This neighborhood is a mix of both old and new offering fabulous art, architecture and culture. You can walk the charming cobblestone streets to visit its vibrant plazas, delightful cafes and shops. Or you can pop into one of its modern art galleries.

On the map, which shows the best area to stay in Montreal, you can see a selection of some of the best located hotels. Old Montreal has so much to offer as a prime location to stay because of its many attractions, cultural activities, fabulous cuisine, and nightlife. It is the best place to stay if you are without a car, because there are so many attractions within walking distance. For a bit of the city’s history, don’t miss the Notre-Dame Basilica with its enormous pipe organ and gold-painted ceilings that will blow you away. If you’re interested in learning about 18th century nobility, step into the Chateau Ramezay. Check out the Place Jacques-Cartier, a big square with restaurants and shops where you can enjoy street artists and live music. Old Montreal is also a great place to stay for families, as it offers some outdoor fun along the water.

The Old Port area is a must see with its boardwalk along the St. Lawrence River. Clock Tower Beach and the Terrasses Bonsecours are popular places in the warmer seasons. The nearby harbor is the location of the electronic music festival Igloofest. Old Montreal is also known for its fine dining and has a variety of types of cuisine to choose from.

Other neighborhoods to stay in Montreal At the foot of Mount Royal, Golden Square Mile is situated in the heart of downtown and just under 2 miles southwest of Old Montreal. This area is the best place to stay for luxury hotels, such as the Ritz-Carlton, Four Seasons, or Le Mount Stephen. As its name implies, this neighborhood covers a small area and the main attractions can be visited on foot. This neighborhood is known for its Victorian-era architecture and stately mansions, as this is where the wealthy businessmen of the 19th century built their country homes. Many of the historic buildings of this area have been converted into restaurants, art galleries and hotels.

There are a variety of museums in the Golden Square Mile, such as the Montreal Museum of Fine Arts, the natural history museum Musee Redpath, and even the Barbie Expo museum. For a unique experience, visit Le Monastére where you can witness a circus cabaret in the evening. There are also plenty of restaurants for all price ranges from casual eats to fine dining. Approximately 1 mile west of Old Montreal, the Quartier des Spectacles is the best place to stay for arts and entertainment. It covers a small area where the major attractions are within walking distance, and at night, its Luminous Pathway lights up the cultural landmarks with a glowing red carpet. Regardless of season, there is always something going on in this neighborhood, as it offers over 40 festivals a year, including the Montreal International Jazz Festival, Just for Laughs comedy fest and Francofolies, a French-language music festival. With over 30 performance halls in this area, you have your choice of entertainment, from plays and dance performances to operas and concerts.

Visit La Vitrine box office where you can find information and tickets to the many cultural events. For shopping, check out the Complex Desjardins, a nice mall with a water fountain in its center. Place des Festivals is this neighborhood’s central public space and new square with a water fountain, light towers, two restaurants that are encased in glass. The Gay Village, or simply the Village, is located a little over a mile north of Old Montreal. This is the best place to stay for its parties and nightlife. It is the largest gay village in North America, and a place where everything goes and all are welcome. You will find a rainbow flag at the Ville-Marie and rainbow pillars at the entrance of the Beaudry Metro station, as well as a canopy of colorful balls on the main drag of Sainte-Catherine Street, which is closed to traffic from June to September. Fierté Montréal is the neighborhood’s famous annual LGBTQ pride festival. Y

ou can also enjoy the week-long techno party “Black and Blue.” There are plenty of nightclubs to get your party on, including cabaret shows with drag queens at the popular spot Cabaret Mado. You can find a variety of cuisines in the Village, from Vietnamese street food to pan-Asian to mac and cheese, in addition to delicious bakeries and cafes. This area is also a great place to stay for vintage shopping. Check out G.O.D. for men’s fashion, Frip Frap for retro furniture, or Second Chance for items from the 70s. This neighbourhood is full of 20th century buildings as well as many 19th century churches, with the St Michael church being visually one of the prettiest. There are a few parks to explore and include Parc Jeanne-Mance, Parc Lafontaine and Carre Saint-Louis, which all offer stunning views over the area and many people use the parks for cycling, skating and lots of ball sports. This area has many theatres, art galleries, music and vintage clothing stores, which makes a great wander around especially as there are a handful of Victorian homes too.

For eating, there are a vast number of restaurants, which are mainly focused on French and Canadian cuisine and there is a brilliant choice of bars to pick from, with most of them having some form of live entertainment. In terms of hotels, there are a lot less to choose from but there are an adequate number of very high-standard ones. This neighborhood has the feeling of its own village in the city, which is just to the east of downtown and is home to some wonderful tourist attractions. This area was the main focus of the 1976 Montreal Olympics and the Stade Olympique was built in the north east corner of the district. There are tours that can be arranged, who can take you around the stadium as well as outside where you will see various sport facilities like the cycling dome, ski slope and BMX venue. The Botanical Gardens of Montreal are a real treat and there are numerous fun-themed gardens and has a museum of insects and other creepy-crawlers.

The main central part of the neighborhood is called Place-Valois and is a very busy square with many rows off it that are lined with duplexes and triplexes that were built in the 19th and 20th centuries. The square is the best place to check out at night time as this area has the most authentic Montreal restaurants and pubs. There are also a good number of hotels, with some even having views of the Olympic Stadium.