WHERE TO STAY IN NEWCASTLE 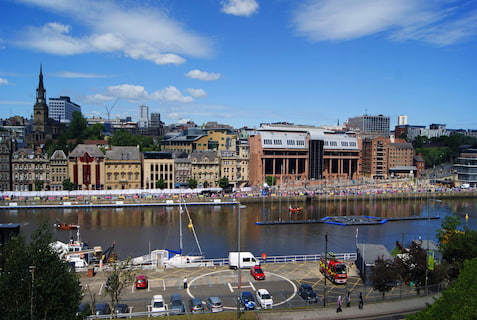 Which is the best area to stay in Newcastle?

A jewel In England’s north - Newcastle is one of the nightlife capitals of the UK, a cultural and university hub, with a long proud history, award winning attractions and a warm welcoming community who know how to let their hair down. The old industrial city has transformed over the past two decades and now attracts millions of tourists each year, who flock to nightclubs attracting world famous DJs, galleries hosting internationally acclaimed artists and top restaurants which serve up some of the best food in the North of England. One of the UK’s liveliest cites isn’t to be missed.

The best area to stay is on the city’s Quayside. The long promenade walkway alongside the River Tyne is home to hundreds of bars and eateries, bustling nightclubs, art galleries and a concert hall. As a result, the area is a hive of activity all year round. Some of the city’s most iconic landmarks, including the Tyne and Millennium Bridge, are based here and market stalls line the streets every weekend. Manmade beaches are built too during the warmer months and musicians line the walkways. The perfect place to get a taste of the famous Geordie hospitality.

On the map, which shows the most convenient area to stay in Newcastle, you can see a selection of some of the best located hotels.

Quayside, the best area to stay in Newcastle

When people think of Newcastle, it’s often the famous view down the Quayside which people envisage. With two iconic bridges spanning the River Tyne and attractions on both the Newcastle and Gateshead sides of the waterway – it’s a hub of activity all year round. Home to many top restaurants, including the Michelin Star House of Tides, and cultural attractions including the internationally acclaimed Baltic Contemporary Art Gallery and Sage concert hall – there is something for everyone.

It’s an area which oozes life seven days a week, and its many bars and nightclubs draw people to the city from far and wide. The Quayside has a variety of stunning architecture, from beautiful timber framed buildings dating back hundreds of years, to grand Victorian stretches and cutting-edge modern design. It’s only a short, but hilly walk, up to the city centre and served by good bus routes, with metro stations also nearby which go direct to the city’s airport.

Other areas to stay in Newcastle This area is just a short 5-10 minute walk north from the Quayside up a stunning hill lined with bars and restaurants. This is the central hub in the city, home to many high street shops, the iconic St James’ Park football stadium, Newcastle University and hundreds of bars and nightclubs. The area is busy during the day with shoppers and riotous at night with partiers. Digital Nightclub is among the most famous and has been named among the best in the UK. Based nearby is the highly regarded Life Science Centre, many local museums and the Theatre Royal.

The area also lays claim to a street named among Britain’s prettiest – Grey Street’s grand architecture winds its way up through the city centre from the Quayside. The city’s train station is based here, with direct links to London and Edinburgh, and the city centre has many metro stations which can take you to the airport and around Newcastle. Jesmond is a leafy residential area only 4 minutes by metro, north-west from the city centre or a 20-minute walk. Over the past two decades the area has become a hub for the city’s 42,000 strong student population and many young professionals also live here. It’s an incredibly popular area with the long, tree-lined, Osbourne Road home to tens of busy bars and many nice eateries. The area has become gentrified in recent years with speciality coffee shops, boutiques and craft beer bars opening alongside a mass of student housing and grand private homes.

It’s also home to many cheap hotels and B&Bs, a favourite for stag and hen parties, who flock for the infamous happy hour deals along the street. It’s also well served with green spaces where you can escape the bustle of the city in woodland, such as Jesmond Dene. Well served by metro to the city centre and airport. Tynemouth is Newcastle’s seaside escape – a 25-minute metro direct to the city centre, but a world apart. The area is highly desirable to live in and is home to a number of stunning beaches and some of the best surfing conditions in the UK. It draws people in from across the country. The quaint streets, which wind from the metro station to the coastline, are full of tasty restaurants and cool bars. Standing tall on the area’s cliff-top coastline is the 2,000-year-old Tynemouth Castle and Priory, which was frequently attacked by the Vikings in its past.

In its shadow, on the nearby King Edward’s Bay beach, is an award-winning sea-food shack called Riley’s, which draws foodies in from across the country. The area also attracts thousands of people to its regular antique and food markets. A beautiful spot to escape the city centre, while also being in easy striking distance by metro. The big draw to this area, which is 20 minutes to the west by metro from the city centre, is the enormous Metro Shopping Centre. It’s one of Europe’s biggest shopping and leisure complexes, home to more than 300 stores, a cinema, bowling alleys, amusement arcades and more than 55 bars, cafes and famous chain eateries.

The centre has recently introduced new climbing wall facilities, an indoor mini-golf centre and a bingo hall. There are few other draws to this area and many come specially for its shops, however, due to its short distance by metro to the city centre, you can still make the most of the attractions there too. It’s well-connected by road to major motorways, and connected by train and metro to the rest of the city. Quite a distance from the airport, but easy enough to reach, with connections via the city centre taking 45 minutes. This area is at the eastern end of the Quayside, about a 20 minute walk from the city’s famous bridges. The once industrial valley is now home to many creative businesses, breweries, music venues and innovative restaurants, which have opened in former warehouses. It’s where you can find some of the city’s best street art too, and it has a laid back, calmer feel than the rest of the city.

It’s popular among the city’s hipster crowd and renowned for its top craft beer bars. The Cluny music venue, based in a former spinning mill, has garnered an international reputation for the acts it attracts, and it’s also home to recording and artistic studios. Pop-up markets and exhibitions are common in this area, and it’s a great place to get a feel for the city’s creative scene. Not quite as well connect as other areas, but a beautiful walk quickly takes you to the Quayside and city centre.