WHERE TO STAY IN OTTAWA, CANADA 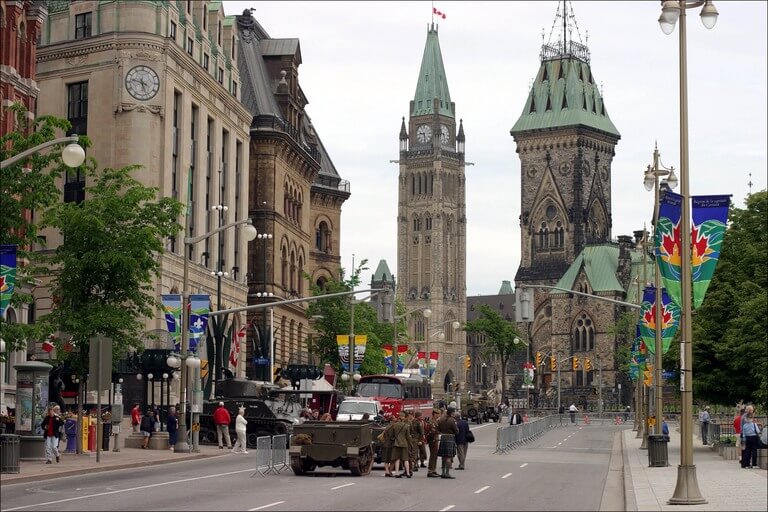 Where is the best place to stay in Ottawa?

Canada’s capital, Ottawa, is a rich and spirited city with a varied cultural scene and an aesthetically appealing centre, speckled with wide open parks and regal Victorian architecture. The gleaming Rideau Canal, which connects the city with Kingston on Lake Ontario, bisects the city past the Canada War Museum and Parliament Hill and offers miles of peaceful, traffic-free walking. Basking along the banks lies the fairy-tale like Château Laurier, built in 1912, but modelled on a medieval castle and the futuristic and asymmetric National Gallery of Canada that resembles a glass prism, which has shaped Ottawa’s modern skyline while still blending in with the surroundings. Bright tulips gloriously carpet the city to welcome the spring after the long winter.

The Centretown neighbourhood in Ottawa has a prolific lode of sights, such as Parliament Hill, the Canada War Museum and the Chateau Laurier all within walking distance of each other making Centretown the best area to stay in Ottawa. The area is pedestrian-friendly and compact and most of the main attractions can be visited on foot, but there are also numerous transport options available including bus, boat, bicycle and taxi.

Centretown, the best area to stay in Ottawa

Ottawa’s Centretown neighbourhood is a vibrant yet mellow centrepiece, where you will find many of the city’s main sights and a good selection of hotels. It is an ideal place to stay as you will always be within walking distance of many of the city’s star attractions, usually nevermore than about 20 minutes away.

Whether you decide to come to Ottawa in summer or winter, Ottawa has a comprehensive year-round list of activities and sights to keep visitors entertained. Follow the picturesque promenade along the banks of the UNESCO World Heritage Rideau Canal to some of the city’s main highlights, which in summer is dotted with ferry boats and people taking a leisurely walk along the banks. You can jump in a paddleboat to explore Ottawa from a different perspective and enjoy a scenic ride along the water. In winter the canal area is transformed into a wonderland of skaters and festive activities and many locals also use the canal’s icy lanes to skate to work.

Stop along the way at the Canadian War Museum or head straight up to Parliament Hill, a conglomerate of imposing neo-Gothic and Gothic-style Parliament buildings built between 1859 and 1927 and home to the Canadian government. You can choose to do a guided tour that will show you the House of Commons and the Senate, where Canada’s laws are debated and made, or discover the grounds and try out the Whispering Wall monument, so named because if you whisper something at one end of the wall, someone else will be able to hear you at the other.

This neighbourhood offers plenty to do. From Parliament Hill you can easily navigate to the National Gallery of Canada, where a plethora of paintings, drawings, sculptures and photographs are on display including works by Andy Warhol and Salviati, as well as native Canadian and Inuit art. The Rideau Canal also leads to the Canada War Museum where you can learn about Canada’s military history through a series of exhibitions that cover wars on Canadian soil as well as international, and commemorate those who lost their lives.

For a taste of the exotic you can soak up the sights, sounds and tastes of Ottawa’s Chinatown which paradoxically criss-crosses the Little Italy neighbourhood. It is one of Ottawa’s most lively neighbourhoods with an abundance of restaurants, delis, bakeries, pubs and shops. In this neighbourhood you will be served up delicious cuisines from around the world amid a steaming hot pot of many different cultures, including Chinese, Italian, Korean, Thai, Vietnamese, Indian, French and Middle Eastern.

Ottawa is also a city that likes to celebrate. The Spring Festival pays homage to the return of spring and the tulip that was presented to the city by Princess Juliana of the Netherlands in 1945 after the Second World War. Over a million tulips blossom across the city’s public spaces. In summer the city attracts jazz aficionados to the TD Ottawa Jazz Festival which features local and international acts and on July 1st the entire city literally explodes into gleeful party mode to celebrate Canada Day.

Other places to stay in Ottawa

The Byward Market district is a great alternative place to stay and offers the chance to get under the skin of Ottawa’s past. The Byward Market represents both the local farmers market, which is one of the oldest in Canada, as well as the area it is located in. All the staples of Canadian cuisine can be purchased in the market including maple syrup and BeaverTails, a sweet, doughy pastry that comes with a variety of toppings such as whipped cream, banana, Oreos, cinnamon sugar, and chocolate. This snack is particularly delicious in wintertime after a skate on the Rideau Canal. The main activity centres around the Sussex Street area where you can browse arts and crafts stalls and colourful food stands, while in the side streets quirky boutique shops and fashion abound.

A sub-neighbourhood of Downtown Ottawa, the Golden Triangle is a leafy residential neighbourhood connected to Elgin Street and the Rideau Canal and is a beautiful place to stay during your visit. It is one of Ottawa’s trendiest neighbourhoods and its great location means that you will only be a 15-minute walk from the centre of the city. A popular student area due to its close proximity to the university campus, it has a young, vibrant atmosphere and an animated night scene. During the day you can peruse the many boutiques, cafes and glass-fronted galleries that sit side by side on Elgin Street. In the evening, Elgin Street becomes the city’s hotspot for hip bars, restaurants and clubs.