WHERE TO STAY IN PHILADELPHIA 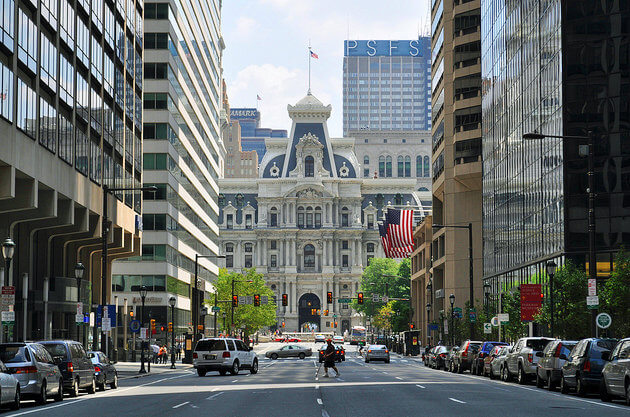 Where is the best area to stay in Philadelphia?

Pennsylvania’s largest city has much to offer when it comes to America’s revolutionary history. This is the place where the Declaration of Independence and the Constitution were signed, making it a significant site for any history lover. Whilst strolling through Independence National Historic Park, go and see the famous Liberty Bell and Independence Hall. See art works by Renoir and Van Gough at the renowned Philadelphia Museum of Art, or take a run up the very same steps that Sylvester Stallone triumphantly climbed in Rocky. Elsewhere in the city, spend an afternoon seeking out the most delicious Philadelphia cheese steak you can find.

To be truly in the heart of things, the best area to stay in Philadelphia is the Center City area, between the Schuylkill and the Delaware rivers. This is where the Museum District lies, along the Benjamin Franklin Parkway. You’ll be within walking distance of cultural attractions like the Philadelphia Museum of Art and the Liberty Bell, as well as a host of restaurants, bars and shops to keep you occupied. It’s also home to the beautiful Franklin Square and the towering Philadelphia City Hall building. In this central area, you’ll be well-connected by public transport links such as the SEPTA rail line.

Of all the great places to stay in Philadelphia, the City Center is by far the best! Located between the Schuylkill and Delaware Rivers, Philadelphia City Center is definitely the cultural hub of the city. With numerous museums in the famous Museum District, combined with a range of great bars, restaurants and clubs, this part of Philadelphia has something for everyone! It is also very well-connected to national public transport and has fantastic accommodation options. Within the center itself, there are many areas to choose from, with most accommodation found in the Rittenhouse Square Area and the historic Old City. 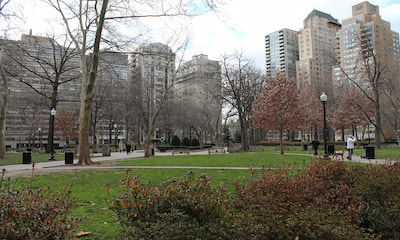 A gem for luxury travelers, the Rittenhouse Square Area is a dream place to stay within Central Philadelphia. It is a peaceful and relaxed neighborhood full of boutique hotels and luxury apartments and a very safe area to stay in.

Rittenhouse Square Area is perhaps most famous for its delightful Rittenhouse Square Park. This is an ideal place to take a stroll in nature, have family picnics and unwind after a day of sightseeing. After this, there is nothing better than dining or having a drink at one of the many top-quality restaurants and bars in the neighborhood. With friendly service and authentic cuisine, you will quickly feel at home here.

As well as the dining and relaxing, shoppers will love the Rittenhouse Square Area, as there are numerous boutique and high-end stores. Entertainment lovers can also enjoy shows at one of the fantastic theatres in this neighborhood. 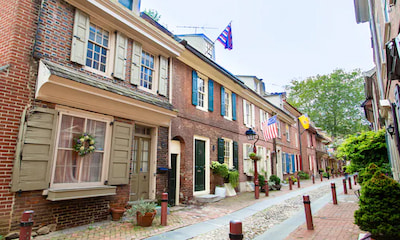 Part of Philadelphia’s famous Historic District in the heart of the city, the Old City is the best place to stay for history buffs. Philadelphia was actually the first ever U.S city to gain World Heritage Status, thanks to its fascinating culture and history.

By staying in the Old City, you have ideal access to all of the main sites in the Historic District. You can choose from a range of accommodation with an ideal location close to everything. The best sites in and around the Old City include Independence Hall, The Liberty Bell Center and The National Constitution Center.

However, there is even more to do in the Old City than just visiting historical sites. You can enjoy the delicious restaurants and vibrant nightlife in this district, as well as the many boutique shopping stores. Another popular option is a lovely walk and picnic at the Delaware Waterfront.

Other areas to stay in Philadelphia

A phillies game, an eagles game, with a car 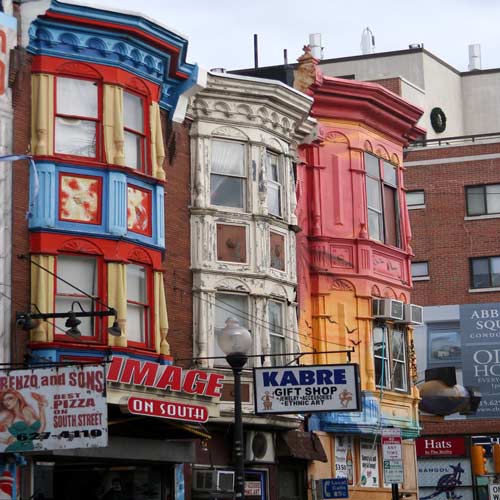 South Philadelphia, or South Philly as the locals call it, is an area that has played an important role in making Philadelphia the city it is today. It’s known for being one of the most culturally diverse locations in Philadelphia. It’s also one of the oldest areas of the city, so whilst it may not be quite as central as Center City, it’s still an interesting place to stay.

For those who appreciate a delicious meal out, South Philly is an ideal location. There are some great places to eat out in the area, especially if you’re a steak fan. Even those in Center City often make a trip to the south side of the city, to Passyunk Avenue, for a juicy cheese steak. But if steak’s not for you, South Philadelphia has a whole range of different restaurants, serving all sorts of different cuisines.

If you’re staying in South Philadelphia, you’ll also be nearby the popular Italian market on 9th Street, where you can buy fresh products like meats and cheeses. Even if you’re not interested in buying anything, it’s still worth visiting, as it also happens to be America’s oldest outdoor market. So South Philly is definitely a great place to stay for those who fancy themselves as ‘foodies’.

It’s not just excellent restaurants that line the streets of South Philadelphia though, there’s also plenty of bars and live music venues that create a lively nightlife scene. So if you want to experience the best Philadelphia has to offer both during the day and night, staying in South Philly is a good way to experience it all whilst being in a slightly less tourist-based area.

If you want to attend to a phillies game or to an eagles game, you will be closer to the Citizens Bank Park and the Lincoln Financial Field, both located side by side in South Philadelphia East. 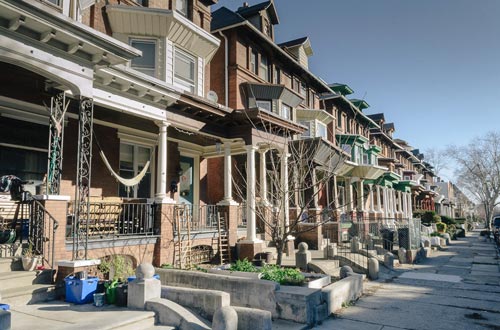 West Philadelphia is mostly a residential area, with a much more local vibe than the touristy Center City. If you’re hoping to save on accommodation, West Philly can be a good place to stay during your visit, as it’s a cheaper area to stay than the popular Center.

West Philly also includes the area that’s known as University City though, which is a popular choice of location for those wanting the convenience of Center City, but for a much more affordable price. There are a few cheaper bars and restaurants in the area, and Center City is only a short way away. There are efficient and easy-to-navigate subway lines (specifically the Market-Frankford line or the Blue line) connecting West Philadelphia to the more central parts of the city. So if you’re interested in visiting all of Philadelphia’s top tourist spots, but don’t want to pay central prices for a hotel, staying in West Philadelphia means that you’ll still be within easy reach of Center City. 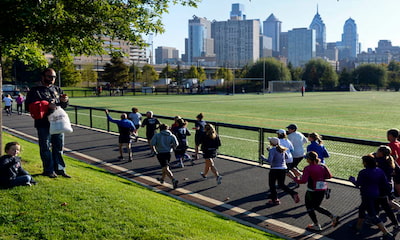 Mingle with the locals and students at the farmer’s markets, or eat out at one of the many restaurants. During the day hit up a museum, and in the evenings, attend an open-air concert or play at one of the many theatres in the area!