WHERE TO STAY IN PITTSBURGH 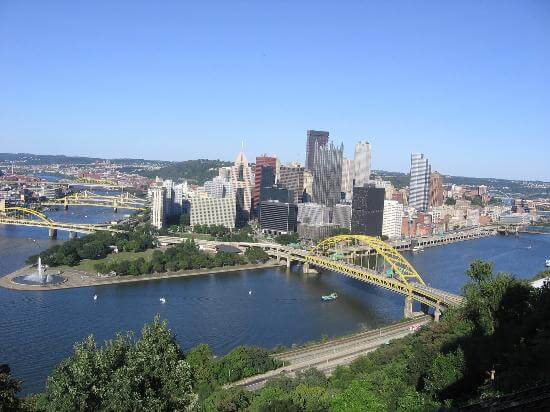 Where is the best place to stay in Pittsburgh?

When it comes to choosing where to stay, the best area to stay in Pittsburgh is Downtown Pittsburgh, or Central Pittsburgh. In this fascinating area you will be within walking distance of all the major historical sights such as the Fort Pitt museum, Carnegie Museum of Art and Andy Warhol Museum.

You will also be able to take a relaxing walk through Point State Park or go for some retail therapy in the vibrant Strip District, which turns into a high-spirited hotspot for drinking and dancing at night.

Former industrial powerhouse, Pittsburgh has turned itself into a cultural hub, offering urban explorers a dynamic cultural life, busy entertainment and nightlife scene and fantastic shopping that attracts visitors from far and wide. Draped across the point where the Allegheny, Monongahela and Ohio Rivers join - the “Golden triangle” - Pittsburgh’s unique hilly topography is further enhanced by a series of lovely bridges that criss-cross the entire city. Today the name of steel industrialist Andrew Carnegie lives on in the city’s top cultural institutions such as the Carnegie Museums of Pittsburgh. A visit to Point State Park tells the intriguing story of this city’s previous glory days at the Fort Pitt Museum.

Downtown, the best place to stay in Pittsburgh 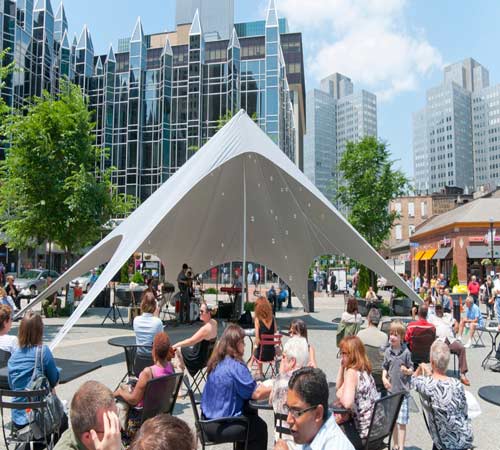 When it comes to choosing the best area to stay in Pittsburgh, downtown Pittsburgh is an obvious favourite. The neighbourhood is well connected to the rest of the city and region by major highways and has excellent transport connections including the Allegheny County public transit bus and light rail systems. Several building booms have changed the city skyline turning it into a striking hodgepodge of steel and glass skyscrapers and decorative 19th century buildings. There are many attractions in this area, most of which are within walking distance of each other, so it´s a great place to stay if you are short of time.

Pittsburgh’s much-loved green space, the Point State Park, commemorates Pittsburgh’s role in the French and Indian war and is an oasis of wide green open spaces, landscaped gardens and sweeping city panoramas. Bisected by great long ribbons of river, it offers a multitude of leisure activities and the park is often a colourful scene of kayakers, hikers, joggers and rollerbladers. The riverfront promenade is a beautiful place to take a stroll and the large grassy areas ideal for a picnic or pit stop. There are companies within the park that provide rental services for bikes, kayaks, rollerblades and so on.

Inside the Point State Park, you can navigate to the Fort Pitt Museum that is housed within a replica of the citadel Fort Pitt, originally constructed in 1758 by the British. It tells the story of Pittsburgh’s history using exhibitions and galleries. Directly opposite resides the Fort Pitt Blockhouse, the last and only surviving relic of the original Fort Pitt. From there you can also access the park’s centrepiece, the stately Point State Park Fountain whose water surprisingly shoots out from an underground glacial stream.

The area is a great place to stay for cCulture aficionados as they can get their fix at the Carnegie Museum of Art and the Andy Warhol Museum, the latter of which is the largest museum in the world to be dedicated to one artist. Warhol was born and raised in Pittsburgh and this collection features over 4000 pieces of his work as well as extensive archives.

The fifth ranked National History Museum in the country is located right by the Museum of Art and holds many of the country’s anthropological treasures, including the first-ever discovered T-Rex, while kids and adults alike will get excited by the impressive Carnegie Science Museum, which also houses the aquarium and the opportunity to gaze into outer space.

Tucked up against the Allegheny River in the north-east corner of the city overlooking the Allegheny River, the city’s bustling Strip District offers access to boutique shopping and some of the city’s best eating and drinking. The Strip District is an eclectic blend of the old and new and is another great place to stay in Pittsburgh. Interspersed around the many bars and restaurants , this area also boasts many food stalls, organic farm shops and ethnic grocers and with numerous specialist coffee bars, you’ll be able to smell the coffee from a block away. At night The Strip turns into one of the city’s key nightlife areas.

Other areas to stay in Pittsburgh 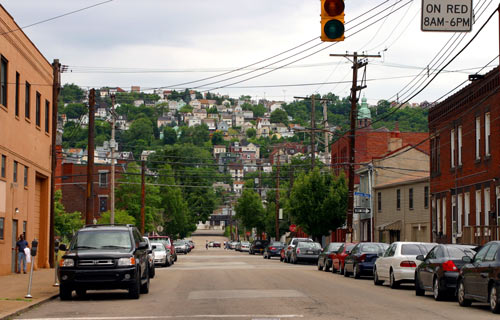 Pittsburgh’s “Great American Main Street” East Carson Street covers an area of roughly 15 blocks and is filled with a mishmash of quirky shops, restaurants, art galleries, theatres and live music venues, all within walking distance of each other. Carson Street is one of the largest Victorian main streets in the United States earning the area the title of “National Historic District”.

The South Side area also has a growing list of fine restaurants and the city’s latest large-scale development project Southside Works, a lively open-air retail, dining and entertainment venue situated right on the river, housed within a former steel mill. If you are feeling energetic you can climb up the South Side Slopes for views over the city, but be warned there are 68 sets of public stairs making a total of 5,447 steps! In some places where the streets are so steep, the stairs have allowed residents a novel way to better access the different neighbourhoods.

Hotels in The South Side 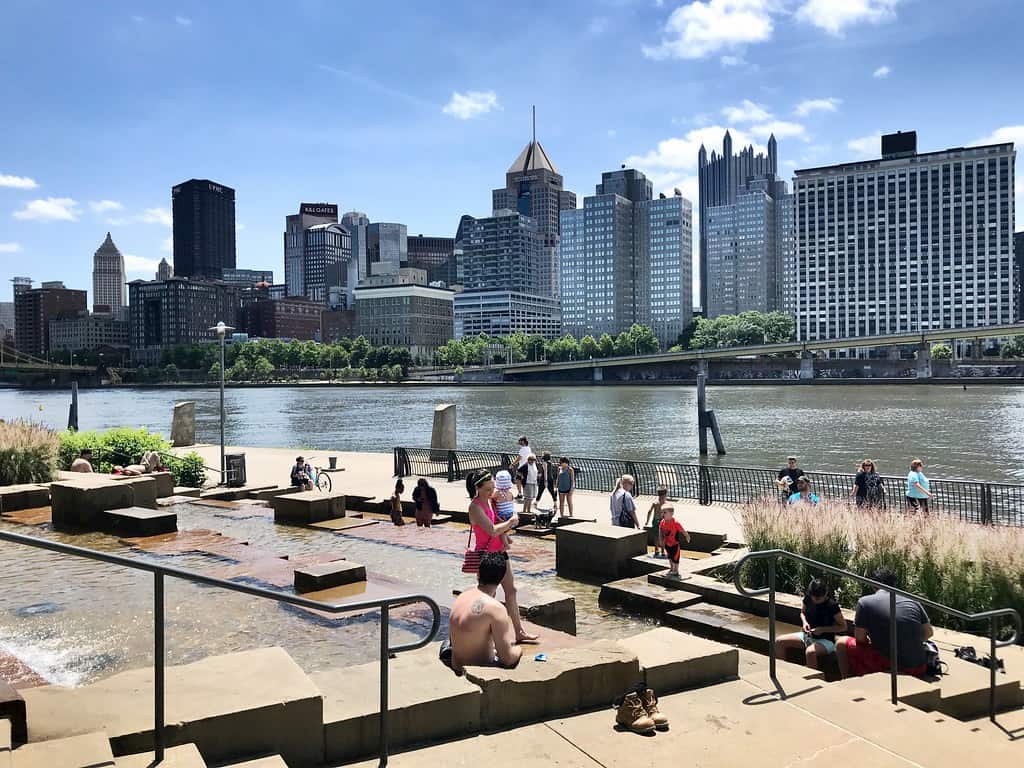 If you enjoy sports you will love North Shore, but you will for many other reasons too! Famous for its sports venues and its city football and baseball stadiums, North Shore is a great area to stay as it has so much for those who enjoy an action-packed holiday! There is the Andy Warhol museum, dedicated to the work of the Pittsburgh-born artist that explores his outstanding legacy.

For children there is the interactive and educational Carnegie Science Centre and the Children’s Museum of Pittsburgh - both are equally interesting to adults too. Another fun activity is to take a ride in the restored cable car up the Duquesne Incline which is 134 metres high (440 feet). There are great views of Pittsburgh and its three rivers from the top. A visit to the Mattress Factory gives the opportunity to enjoy the work by artists from all over the world and the Riverview Park has wooded trails and the historic Allegheny Observatory.

North Shore is perfect for families as there is just so much variety and this includes dining options! You may fancy ribs at Wilson’s Bar-B-Q or Noodles at Nicky’s Thai Kitchen, but maybe the thought of some great German fare at Max’s Allegheny Tavern. For beer aficionados there are two local breweries- Rivertowne and Penny Brewery. For great evening entertainment there are films, theatre and live music, including the Pittsburgh Banjo Club’s open rehearsals.