WHERE TO STAY IN SALTA 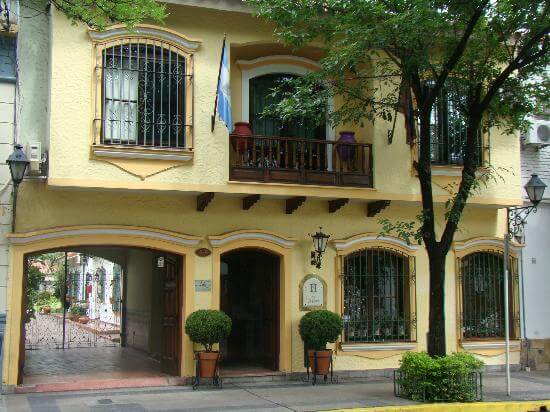 Where is the best place to stay in Salta?

Salta city is found in the northwest of Argentina and shares its name with the province that it finds its self in, which borders the countries of Chile, Bolivia and Peru. The city has wonderful tourist attractions with splendid and informative museums, old colonial architecture, beautiful and traditional cafes, numerous squares to sit and watch the world go by as well as taking in the awesome scenery that surrounds you. Salta is particularly famous for its wine and has some of the highest positioned vineyards in the world and is one of the most popular things to do.

Salta is an old city and its historic centre is definitely the place that we recommend to stay in and this is where most of the main tourist attractions are located as well as being the main nightlife hub. The area is littered with numerous bars, clubs and restaurants and most are located in old colonial buildings, which add to the atmosphere. There are many brilliant museums, churches, halls, towers to check out and there are many appealing hotels with excellent customer service and facilities to stay at.

City Centre, the best area to stay in Salta The historic centre of Salta is a superb location to name as your base and is the best area to wander around in the whole city. There is a friendly and relaxed atmosphere about the place with birds singing, flowers and plants elegantly hung up and locals congregating and chatting.

The oldest town hall in the city is also located by the square and that is the Cabildo, which was built in the late 18th century and is the best preserved hall. It now operates as the North Historical Museum, which has many artefacts and documents about the city and surroundings. The Colonial Museum of Fine Arts is home to some of the finest paintings from that era and include various artists that were local, regional and national status. The square is also dotted with lots of shops that sell different souvenirs like handicrafts and other similar items as well as many cafes that offer lovely cakes, patisseries and delicious coffee.

Close by the square there are a number of other museums like the Museum of High Mountain Archaeology, which exhibits all about the Inca culture and goes back over 500 years. Another interesting museum to check out is the Museo Antropologico, which focuses on various different indigenous cultures that have existed in this part of Argentina. The Pajcha is a fascinating museum that consists of a wide collection of items from Central and South America like traditional jewellery, textiles and art and there are in depth tours of the premises.

Other places of interest include the San Francisco church, which is gorgeous and stunning and was built in the late 18th century and is one of the most important churches in the city. The church is seen on many postcards and is of a terra-cotta façade and is accompanied by one of the tallest belfry’s on the continent, which stands at 174 feet. Another religions building is the Salta Cathedral, which daunts the main square and has beautiful interior and exterior with angels situated everywhere and wonderful tile designs. Another major tourist attraction is the Cerro San Bernando, which is a decent-sized hill and there are cable cars that take you up to the 1000 foot summit, where you can get the best aerial views of Salta, so don’t forget your camera.

There are some great places to shop in and the Balcarce Arts and Crafts Fair happens every weekend, where you can buy many gifts that have been locally made as well as food stalls and some clothing stores. Otherwise there are shops and stores that pop up all over the historic centre from designer shops to independent ones, which will satisfy the most avid shopper. There are also a lot of travel agencies located in the vicinity, who can arrange tours and trips to surrounding places like the vineyards as well as activities such as cycling, trekking, mountain climbing, rafting, fishing, horse riding and paragliding.

The main square and surrounding streets are home to many restaurants that serve traditional Argentinean food and even local Saltenan food like mashed corn, exquisite steaks and the famous delicious wine that is grown in the region. You can also find other cuisines like Bolivian, Italian, French, Spanish and Mediterranean, which are all very tasty and most of them are reasonably priced.  After having some food, head to the Balcarce area, as it has the most extravagant nightlife with many bars along the street having live folk music and serve the local tasty “Salta” beer and of course beautifully-made wine. Another reason to stay in the area is to do with the selection of hotels, which range from decent standard places to some of the most splendid in the region.

Other neighbourhoods to stay in Salta

This area surrounds the long road which goes west from the historic centre and though doesn’t have the tourist attractions of the city centre, it does have lots of shops and restaurants. The majority of the restaurants are focused on local foods and this area has a more community feel about it and therefore not as touristy. As San Martin isn’t as popular as other areas and because of this there aren’t as many hotels to select from.