WHERE TO STAY IN SEATTLE 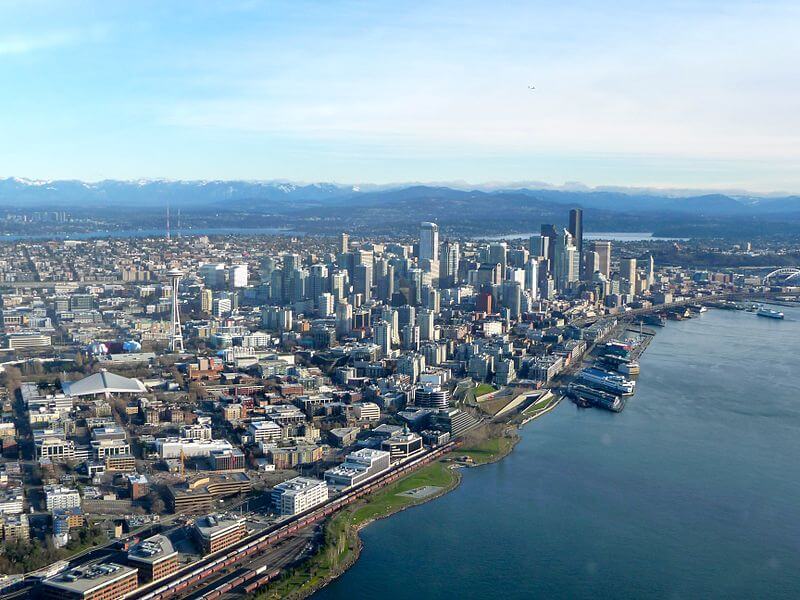 Where is the best area to stay in Seattle?

Nestled comfortably in the inlet of Puget Sound, Seattle is a city that’s surrounded by beautiful forests, lakes, and mountains. So much so, that it has the nickname “the Emerald City”. This is the birthplace of Starbucks, where you’ll find independent coffee shops and can enjoy microbreweries galore. The city has an interesting musical history too; it has inspired musicians such as Kurt Cobain and Jimi Hendrix in the past. While you’re there, don’t forget to enjoy the local produce at Pike Place Market, which dates back to 1907. At sunset, climb to the top of the Space Needle for stunning panoramic views of the city and beyond.

The best areas to stay in Seattle are the Belltown and Pioneer Square neighborhoods in Downtown Seattle. The Belltown neighborhood is a fashionable area with plenty of bars, restaurants, and boutiques. Belltown is also home to some of Seattle’s main attractions, like Pike Place Market, Central Library, and Chihuly Garden and Glass.

Belltown and Pioneer Square, the best areas to stay in Seattle 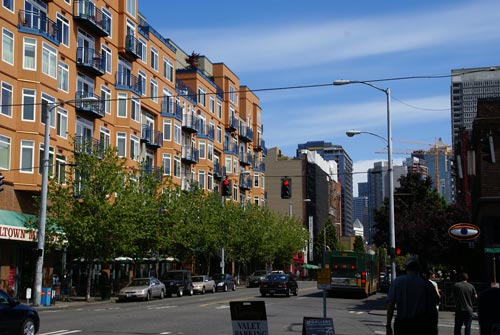 Just north of Virginia Street and stretching from Elliot Bay to Sixth Avenue, Belltown is a very hip area with flashy nightclubs, trendy restaurants, and boutiques. Belltown has changed a lot since the days of Kurt Cobain and grunge in the early 1990s, although some vestiges of that past still remain. Belltown is still a great music venue for up-and-coming independent artists. There are many punk rock record shops and even a gallery that celebrates urban street art.

Some of the regular top draws of Belltown are the Olympic Sculpture Park, Pike Place Market, Seattle Aquarium, and the Seattle Central Library. The Sculpture Park is fantastic and huge! It consists of 9 acres of land in addition to an outdoor extension of the Seattle Art Museum. The Seattle Aquarium has many exciting wildlife features, a crowd favorite here are the sea otters and seals who can be seen implementing their antics through huge underwater windows. The Pike Place Market has almost anything a visitor could ask for and the Seattle Central Library is loaded with manuscripts and historic facts about the area.

And if you wish to take a brief respite, you absolutely cannot miss the “Green Tortoise”, this Seattle icon has been around for many years now and is a favorite among backpackers and other travelers alike. For a backpacker establishment, this place is very neat and clean. Even with the young hipster vibe this place still has a sense of making guests feel pampered. Even on the legendary budget prices of the Tortoise you still get treated to great amenities such as a breakfast and dinner buffet. The history of this lodge is quite a draw in itself. The tortoise is a great stopping point for your trip. 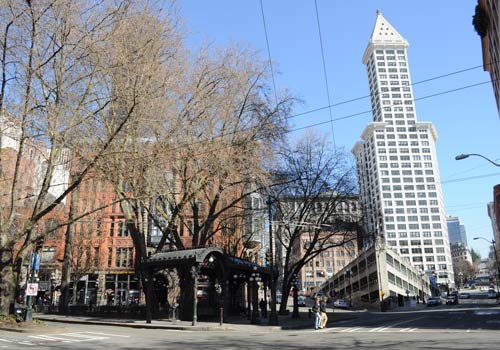 Head on south down 1st Avenue and you will find yourself in the area of Pioneer Square. The easiest way to get here is to catch a bus, and during the daytime, it should be free since Pioneer Square falls within the “Ride Free” area criteria.

Pioneer Square has some very interesting display galleries such as the Hop Gallery, the Clog Factory, and the wildly elaborate, “Bill Speidel's Underground Tour”. Spiedel was a former reporter for the Seattle Times who in his own comical fashion uses this tour to both inform and entertain the audience about Seattle’s past and everything that is culturally and literally underground.

In case you missed this one on the Spiedal tour, don’t forget about the Smith Tower. Built-in 1921, this office building was the tallest outside of New York and for 50 years it maintained itself as the tallest building west of the Mississippi River. Still of breath-taking height, this building is a great place to take a break during your trip. Climb up to the observation deck and you can get a truly magnificent view of Seattle in all of its intended glory.

Two sites the sports fan cannot miss out on when in Pioneer Square are that Quest Field and Safeco Field. Quest field located on the Southside of Pioneer Square is the legendary home of the Seattle Seahawks, and the fans of Seattle, the 12th man as they are referred to in the NFL are not shy about their loyalty to this team. They helped lead the Seahawks to a spectacular victory against Peyton Manning and the Broncos in last year's super bowl, and these fans won’t let you forget it!

Quest field screams victory at you. This open-air stadium has 67,000 seats with a special design created for the lower sections that places the front row seats only 40 feet from the end zone, truly making Seattle’s famous 12th man a part of the game! If you wish to take a tour of this massive stadium, make sure to book an appointment in advance. Tours usually begin at the gift shop known as the “Pro Shop”, from this point the tour will take you all over the field in exploration of the Seattle Sea Hawk’s home turf.

The same goes for the Safeco field, the baseball stadium of the Seattle Mariners. Book a tour in advance and you will be sent on a hour´s tour all over the field, from the dugouts to the locker room. Both of these tours are a lot of fun and worth a trip over to Pioneer Square to take part in them.

Other neighborhoods to stay in Seattle

Beginning its existence as an enclave for Chinese immigrants, the International District was originally known as Seattle’s Chinatown. In the late 1800s, it was the settlement of workers who came from China to work on the Transcontinental Railroad.

Since then, however, this area has been flooded with successive waves of immigration from many other parts of the world. This area, just southeast of Pioneer Square, is now one of the most diverse and vibrant communities you can find on the Pacific Coast.

The massive, “Lawrimore Project” is an avant-garde masterpiece that showcases some of the strangest and most beautiful artwork ever found in the known world. After taking in the art, head on down to Kobe Park, named after the City of Kobe Japan, this park is famous for its 200-year-old stone lantern that was donated from the country to decorate its exterior. This is a very exciting destination to end up in on your tour of Seattle.