WHERE TO STAY IN TBILISI 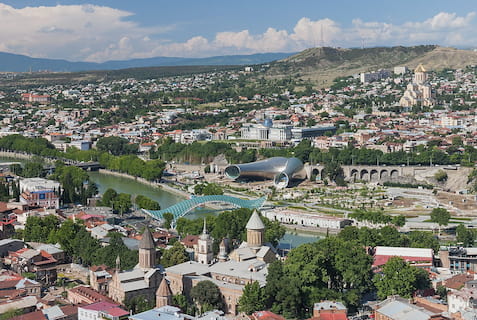 What is the best location to stay in Tbilisi?

Tbilisi has been coined as the new Berlin - an artistic colourful paradise, surrounded by mountains and a fusion of eastern and western influences. With a thriving and wild nightclub scene, bags of history, street art and a café and dining scene which rivals many major western European cities, it’s become one of the must visit city destinations. The city has seen a boom of investment in recent years with old industrial buildings converted into art galleries, food halls and music venues. It’s authentically cool, yet raw and chaotic around the edges, with streets which ooze character and creativity.

The best place to stay in Tbilisi is the city’s Old Town and Bath House District. The area’s charming streets, full of colourful verandaed buildings, wind their way up a hillside towards the city’s mountain top fortress. With a stunning waterfall and river at its centre, numerous sulphur spa bath houses and traditional Georgian restaurants, it’s the best place to soak up the city’s rich history and culture. Georgia is the birthplace of wine and the Old Town is peppered with cosy wine bars, along with beautiful ornate architecture. The perfect place to kick off a trip in Tbilisi.

On the map, which shows the best area to stay in Tbilisi, you can see a selection of some of the best located hotels. The area is sandwiched between the Kura River and mountain top Narikala Fortress, established in the 4th century. It’s a colourful labyrinth of narrow streets, with a wealth of historic and architectural delights. It’s here where you can really feel the mix of cultures and religions which blend together to create the rich Tbilisi tapestry. A place where beautiful churches, mosques and a synagogue sit yards from each other, alongside thriving wine bars and restaurants.

Although it’s at the city’s heart and alive with activity, it also feels at one with nature – with a narrow canyon running off it to the impressive Leghvtakhevi Waterfall and the Botanical Gardens beyond. A short cable car ride or a longer hike will take you to the Narikala Fortress, with stunning views across the whole city. Only a 30 minute taxi ride to the airport and with metro stops nearby, it’s the best place to get a flavour for Georgian life and culture.

Other areas to stay in Tbilisi This area neighbours the Old Town to the north, on the west bank of the Kura River. It’s home to many of the city’s main cultural attractions including the National Georgian Museum, art galleries and the Ballet and Opera House. It’s also home to the grand Georgian Parliament building and numerous beautiful parks. The southern edge of the area is a popular drinking and dining spot, full of artsy restaurants, craft beer and wine bars.

Georgians like to party and this area is as alive at night as it is during the day. The newly developed Bazari Orbeliani is a must-see for food lovers – the stunning covered market hall hosts delicious eateries and traditional food stalls. Nearby a short funicular ride takes you to the top of Mtatsminda Mountain, which has a theme park and restaurants with views across the city. The area is well-connected by metro and in walking distance to other popular areas of the city. This area sits on the East Bank of the Kura River, on the opposite side to the city’s Old Town. The two areas are linked by the impressive Peace Bridge, which leads to the futuristic Rike Park, full of intriguing sculptures and a hot air balloon which gives you panoramic views of the city. This area is one of the city’s oldest and also home to the imposing Holy Trinity Cathedral, a vast complex on top of a nearby hillside.

It’s a quieter and more peaceful area compared to its neighbours on the western side of the river, yet still boasts bags of history, culture and colourful architecture. It also houses some tasty restaurants, which have views over the Old Town and mountains behind. More residential than other areas of the city, but within easy striking distance to the Old Town by foot and a short taxi or metro ride to some of the hip areas elsewhere. This area is quickly getting a reputation for being one of the coolest in the city. Vera is just north of Mtatsminda and blends in to Vake – with the wide Rustaveli Avenue running through its heart to the Old Town. It’s seen a wave of regeneration in recent years with coffee roasteries, vintage shops and natural wine bars popping up, alongside ultra-modern apartment developments.

Vera is known for its excellent drinking and dining options housed in unique spaces, such as the uber cool Stamba in a Soviet era publishing house and Wine Factory – a collection of cool restaurants, wine bars and a music venue in an old wine manufacturers. The area is also well covered with street art by internationally acclaimed artists and is shrouded by mountains to its west which is perfect hiking territory, with beautiful views across the city when you reach the top. Well-connected by metro to the Old Town and rest of the city. This area is further north than Avlabari, on the eastern bank of the river, and another cool destination in the city. One of its main draws is the hipster’s paradise Fabrika – a multi-functional cultural space full of cool bars, cafés, a hostel, artist studios, shops and co-working spaces. The place hosts DJ events in the summer, yoga sessions on its rooftop and is covered head to toe in street art.

Nearby you have the long pedestrianized Davit Aghmashenebeli Avenue, filled with restaurants and bars, and the must-see bustling Dezerter Bazaar - an enormous market where all sorts of food and local produce is sold. On the northern edge of the area you have the National Football Stadium, which houses the nightclub Bassiani underneath it in a former Olympic swimming pool. It has a reputation for being one of the world’s best, and the music runs throughout the night and only finishes at lunchtime. This area is slightly further north than Vera and linked to the city by the arterial Rustaveli Avenue. Like Vera it’s awash with cool restaurants, bars and coffee shops, but also a popular shopping district with many fashion boutiques. It’s also seen an enormous amount of regeneration in recent years, with ultra-modern apartment blocks, offices and hotels lining the streets. In the far west of the area you have the grand Vake Park, which winds its way up a hillside and full of beautiful flowers.

The city’s second cable car is based here too and after a short ride you can get to the mountain top Turtle Lake, with a zip line in the summer which leads back to the base of the mountain. A little further out than the other areas, but with good metro links to the city centre and Old Town.