WHERE TO STAY IN TEL AVIV 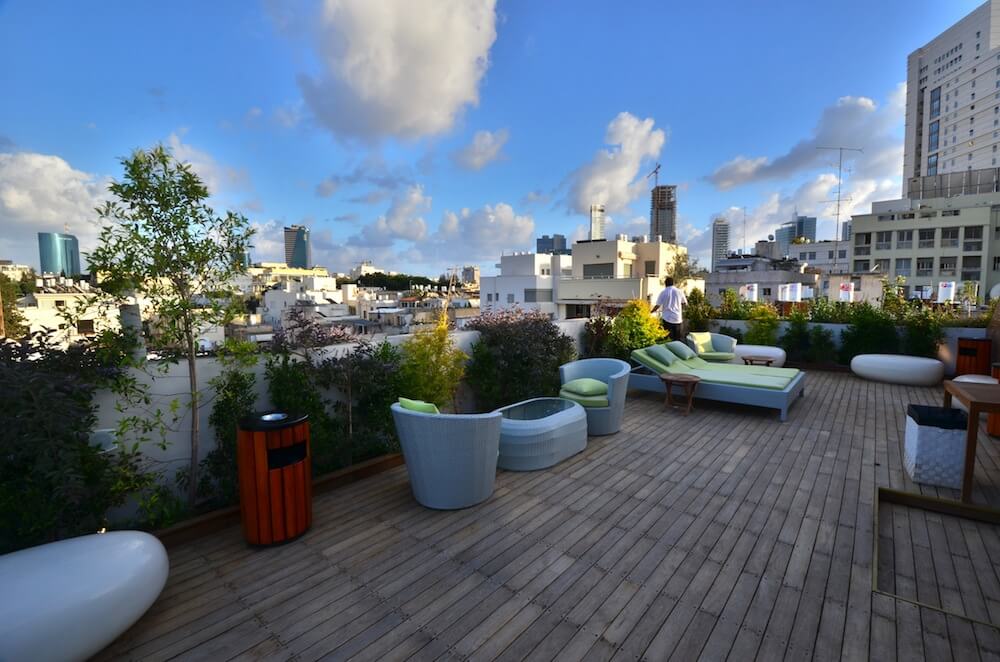 Where is the best area to stay in Tel Aviv?

Tel Aviv is known for its White City, a large cluster of 1930s Bauhaus buildings that have become a UNESCO world heritage site. The city is also famous for its wonderful sandy beaches as well as it’s cosmopolitan vibe and excellent nightlife. Take a stroll along the beach to Jaffa Old City, with its hip galleries, shops and flea market. Pay a visit to Tel Aviv Museum of Art, or trace the history of Israel at the Palmach Museum. Go shopping at Carmel Market or browse the craft stores at Nachlat Binyamin Pedestrian Mall. Explore the trendy upscale neighbourhood of Neve Tzedek when you’re finished.

When deciding where to stay in Tel Aviv, the best area to stay in is the city centre. Here, you’ll be in one of the safest areas of the city, surrounded by some excellent amenities. You’ll be within walking distance of the famous White City with its wonderful Bauhaus buildings and heritage. The city centre has a huge choice of fantastic bars and restaurants as well as several interesting shopping areas and markets. You’ll be able to walk to the beautiful beach area and all of the leisure options it offers, as well as one of the city’s main squares for sitting in and socialising, Dizengoff Square. Transport in the area I easy with plenty of buses and trains to get you around.

On the map, which shows the most convenient area to stay in Tel Aviv, you can see a selection of some of the best located hotels.

City Centre, the best area to stay in Tel Aviv Finding one of the many amazing hotels will be the first thing on the itinerary as once you have sorted this out, you can really explore the city as it is extremely accessible from this neighbourhood. There are frequent buses and taxis that can transport you to different parts of the city and there are brilliant links to the Ben Gurion International Airport with many hotels offering their own shuttle buses to pick you up and drop you off. Tel Aviv is generally a safe city and the city centre is by far the safest neighbourhood, though be ready to let security guards look into your bags and possessions at markets, shopping malls, bus stations, cafes, restaurants and night clubs as they are very strict.

One of the best start points is by Rabin Square, which is the biggest public square in the country and is one of the most iconic sights of the city and is where many demonstrations and events happen and usually involves lots of people. There is a memorial in the corner of the square, which is dedicated to Itzhak Rabin who was a prime minister that was assassinated back in 1995.

Another square worth visiting is the Dizengoff Sqaure, which is elevated and therefore offers beautiful views of the city and there is a gorgeous fountain that represents fire and water as well as various statues of famous people that have lived in the city. Other things to see include the Tel Aviv Museum of Art, which has many artworks that focus on modern and contemporary art and exhibitions change a lot of the time. The Bauhaus Centre has detailed exhibitions on Bauhaus designs and there are a few shops where you can purchase goodies from. The Haganah Museum recounts the interesting story of the Israel Defence Force right from the start when the British were in the country right up to Israel’s independence. The museum has lots of artefacts like weaponry, uniforms and various other bits of equipment, which make for an exceptionally fascinating experience.

The main shopping streets are Shenkin, Dizengoff and Ben Yehuda, which have a diverse selection of places to check out including cloth shops, designer stores, jewellery and souvenir stores. For more upscale shops head to either the Azriely Centre or the Dizengoff Centre as they are some of the biggest in the city, which offer plenty of shopping options. You will find the best collection of restaurant, pubs and hotels along the King George street, which cater for all tastes.

Other areas to stay in Tel Aviv Jaffa represents the ancient city centre and port area and therefore is in demand in terms of tourists wanting to stay here, which is a very safe area and is well connected to the rest of Tel Aviv. Jaffa was once used as the main settlement for some of the first occupiers of the land and today is home to the highest concentration of Arabs in the city. There are plenty of attractions to see including churches, cathedrals, fortresses, bridges, gates and many little narrow cobblestone streets and alleyways.

There are museums with the most famous being the Ilana Goor Museum, which contains work by international and Israeli artists and the neighbourhood has several markets and bazaars that sell anything and everything that you could possibly want. The best streets to eat, drink and sleep are either Yefet, Tirza and Eilat and are the best areas to visit at night time. Arty, trendy and increasingly fashionable, Neve Tzedek is in the south of the city and sits on the Mediterranean coast – making it the perfect place to stay. Nave Tzadek is an attractive oasis in the city, as it has quaint narrow streets for wandering and oriental architectural styles to admire, Shabezi Street is the district’s main thoroughfare. Following the area’s rejuvenation (1960-1980), there are many stylish pastel-coloured houses with contemporary architecture and property here is much sought after.

You can stop and browse in designer shops, boutiques and handicraft studios and galleries. In contrast, there is a delightful weekly market in HaTachana – the restored railways station. If you fancy a leisurely stroll along the sea front, it takes just 15 minutes to reach Jaffa. There are restaurants serving European cuisine, trendy bistros and elegant coffee shops. Neve Tzedek has the hottest night scene in Tel Aviv with a wide range of entertainment including several jazz clubs with live music. The Yemenite Quarter is Tel Aviv’s most charming neighbourhood and a great place to stay. Many of the small hotels lie very close to the sea. There are a maze of narrow winding streets to explore that are surprisingly tranquil compared to the hustle and bustle of nearby Allenby Street and the Carmel Market. There are a number of small workshops with talented young artists creating craftwork and vibrant textiles. The Yemenite Quarter (also known as ‘Karem’) is authentic and unpretentious and known throughout the city for its numerous excellent little restaurants which serve traditional Yemenite Jewish dishes at amazingly good prices.

The best hummus is made in the neighbourhood in a number of small workshops run by fourth generation families and these places are always popular! Lachuch is another local delicacy and is a delicious yeasty pastry sold by housewives straight from their kitchen windows!