WHERE TO STAY IN ATHENS, GREECE 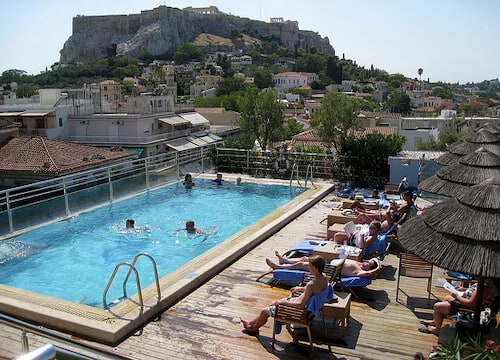 What are the best places to stay in Athens?

Athens is a city of legends and myths, where democracy, philosophy, and theatre were born, and one of the best cities to visit in the world. It is a place to enjoy every minute, contemplate the beauty of ancient masterpieces and live in the moment. Arriving in Athens, you will plunge into the history of Ancient Greece and see with your own eyes the beauty with a long history. Here, you can visit an incredible open-air museum, one of the symbols of Greece, – The Parthenon Temple. This unique monument of ancient architecture, located in the central part of the Acropolis, will impress you with its grandeur.

Plaka, the old historical neighborhood of Athens, is the best area to stay in Athens. It is located within a short walking distance of the Acropolis Museum, Temple of Olympian Zeus, as well as from the Acropolis Museum complex, where you can see the legendary ruins of Parthenon. This charming area is perfect for walking around, with plenty of restaurants, cafes, little squares, and souvenir shops. Also, it has a good public transport connection. From the Acropolis metro station, you can easily access other areas of the city and Athens International Airport. Buses also run regularly to Piraeus Port, a popular starting point for cruises around the Greek islands.

On the map, which shows the best area to stay in Athens, you can see a selection of some of the best located hotels.

Plaka, the best area to stay in Athens 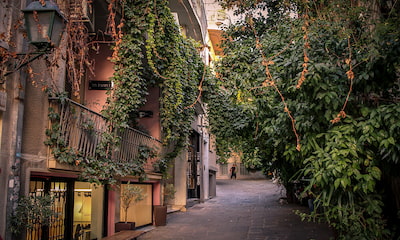 Plaka is all about narrow cobbled streets, ancient monuments, and churches that will take you to the distant past of the great city. Many houses in Plaka stand on ancient foundations. It is almost entirely a pedestrian zone. Also, in Plaka you can find the cosiest cafes and taverns, as well as stylish souvenir shops where you can buy authentic Greek goods such as wine, olives or feta cheese, as well as antiques, and legendary Greek sandals. Once the streets of this part of the city were full of noisy music and people having fun, being a real kingdom of casinos and nightclubs.

But now the Plaka area in Athens is the epitome of measured and calm rest, which reigned here after the issuance of a decree banning loud music in the old city. Therefore, this district is good to choose if you are travelling with family, and kids.

Other areas to stay in Athens

Hotels with Acropolis views, before a cruise 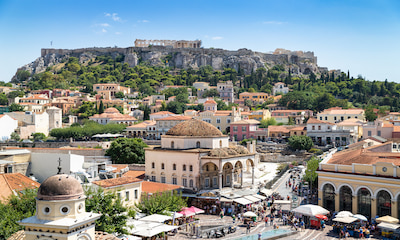 Monastiraki is another great area to stay in the centre of Athens. It is neighbouring district with Plaka, located about a half kilometre from it, which takes just 7 minutes' walk. Monastiraki is a square in Athens, in the centre of the old city, next to the Acropolis. This area of the ancient city will not disappoint shoppers, gourmets, connoisseurs of crafts and arts. Life is in full swing here every day, but it is especially active on Sundays.

Monastiraki metro station is located just on the square. From here it is easy to get to the port of Piraeus, which is very convenient for those who travel on a cruise. Here you can do unique shopping! If you walk along Avissinias Street across Emru Street in the direction of Psiri on a Sunday afternoon, you can see a real flea market, where you can even find firearms from the Second World War. 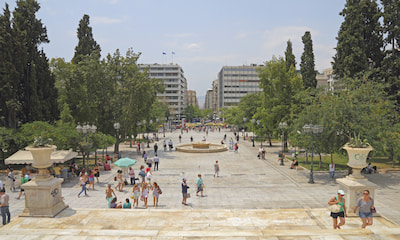 Syntagma Square and its surrounding area has a lot to offer to travellers. It is located just 650 meters from Plaka, which takes only 8 minutes on foot. It is an ideal area to stay for those who come to Athens just for one day. From here you can visit all sightseeing places easily. On the eastern side of the square is the grandiose complex of the Greek Parliament Palace and the marble steps that lead tourists to Amalias Avenue. There is also an hourly change of the royal guard near the Monument to the Unknown Soldier.

On holidays the changing of the guard is followed by the orchestra, don’t miss this experience! In addition, most of the transport interchanges of the capital converge on Syntagma Square in Athens, and under the square there is a metro station of the same name, from where you can get to any corner of the city. 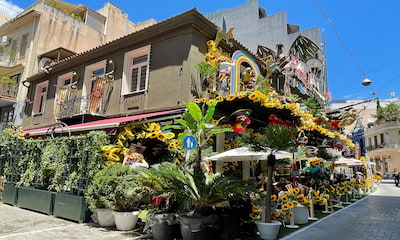 Psirri is a district known for its nightlife in Athens. It is situated about 1 kilometre from Plaka, and is easily accessible on foot. This is an old quarter with a labyrinth of lanes that you constantly want to photograph. It is less famous than Plaka, but no less attractive. It used to be like Harlem or the Bronx in New York. Even the police were afraid to set foot here. During the Greek War of Independence, partisans hid here, but after the declaration of independence, Psirri began to take on a more positive appearance.

Now it is the Mecca of all parties in the capital. Every day, in the evenings, “rebetika”, Greek chanson is heard from everywhere, locals dance in taverns and nightclubs. There are a lot of graffiti and small shops selling rare spices, wines and local delicacies. As such, there are no attractions in Psirri. However, the area itself is one huge monument.

Close to the Acropolis 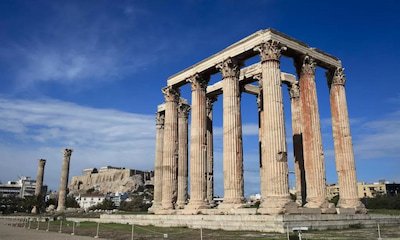 Koukaki is another great central district in Athens, located just 1,5 kilometres from Plaka, which takes only 13 minutes by metro. Koukaki is included in the list of 16 popular areas in the world for rental housing in the centre of the Greek capital. Ideally located at the foot of the Acropolis and Philopappou Hill, this residential area is a combination of authenticity, convenience and entertainment. One of the highlights of Kukaki is the combination of architectural styles it contains. With its mismatch of neoclassical houses, low-rise buildings dating back to 1930s and post-1970s residential neighbourhoods, Koukaki includes small shops, traditional restaurants, art galleries, museums, and colourful bars and cafes.

Koukaki has several architectural gems, including the artist's show stop home, Margherita Theodorakis, daughter of composer Mikis Theodorakis (the one who composed the soundtrack for Zorba the Greek) on Tsami Karatasu Street, a picturesque street at the foot of Philopappou Hill. 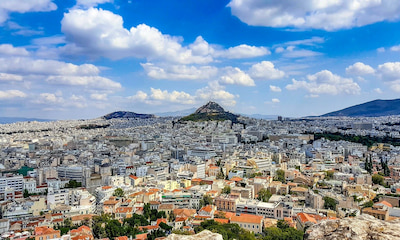 Kolonaki is the most elite district of the capital, located not far from Plaka, 1,7 kilometres, which takes 17 min by metro. Wealthy Athenians live here, as well as many expensive boutiques, luxurious restaurants and cafes are located. In the 19th century, there was a royal palace in Kolonaki, that is why this area was initially occupied by the local aristocracy. The district's name means "little column" which you can see on central square. The district is the cultural centre of the capital.

Here you can find the most famous museums, such as the Benaki Museum and the Cyclades Art Museum with the richest private collections in all of Greece. Wealthy Athenians who live nearby love to relax in Kolonaki, so you can easily meet Greek politicians, musicians and famous actors in the elite cafes of the area. Additionally, here you can climb Lycabettus Hill, which offers stunning views of the Acropolis, and where you can admire breath-taking sunsets. 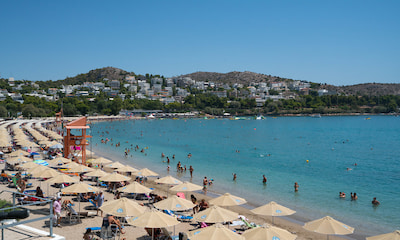 Vouliagmeni is one of the best districts of the Athenian Riviera. Sea air combined with the aroma of Mediterranean pines and eucalyptus create a healing microclimate. And the proximity to the capital makes it very attractive to tourists. As for accommodation, after the Olympics in 2004, and the growth of tourism in the last decade, the area has got many hotels of all types.

One of the main attractions of Vouliagmeni is Vouliagmeni Lake with its thermal springs. Around the lake rise yellow rocks, overgrown with coniferous forest. The lake is connected to the bay by a six-meter canal, so its waters are salty, mixed with sea water. The water temperature does not fall below 20° C even in winter, so it’s a place to enjoy all year round! Besides, in Vouliagmeni there are many cafes and restaurants, representing both traditional Greek cuisine and works of culinary arts from all over the world. 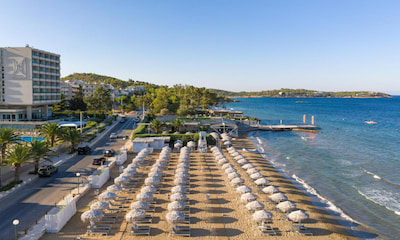 After exploring the ruins and museums of the hectic Greek capital, it is nice to return to calm, picturesque area in Athens riviera. Kavouri is the perfect place to stay near Athens. It is a beautiful place with a sandy shore and a pine grove located just 22 km south of Athens.

Although there are not many places to stay if you travel on a budget, as it is known for upper-class tourism, some guest houses are also available. The area has plenty of luxury villas to rent, as well as comfortable hotels, popular with celebrities.

Kavouri has a long promenade area, organized for pleasant walks. Here you can find restaurants with fresh seafood, and other local delicacies. In the summer you can relax on the two beaches – Megalo and Mikro-Kavuri, where you can stay for free, or rent sun loungers with umbrellas. The entrance to the sea is gentle, so it is good to come here with the kids.