WHERE TO STAY IN BRUSSELS 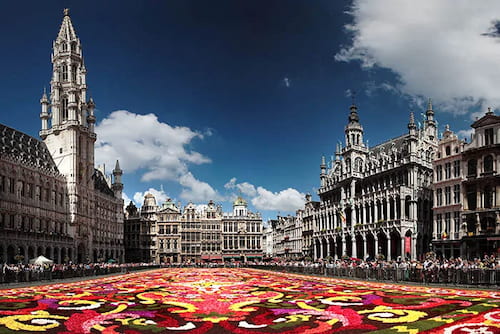 What is the best location to stay in Brussels?

If you're a fan of parks, galleries and beautiful architecture, then Brussels may be the city for you. World class museums and a thriving cafe culture make it a popular destination, in addition to the pretty nearby towns of Ghent and Bruges. While you’re there, stroll through the stunning Grand Place, one of Europe's most attractive squares, and marvel at the majestic Palace Royale, home of the Belgian king. Whether you're sipping famous beers, gazing at gothic buildings or sampling delicious Belgian chocolate, you're sure to find something that delights you in this small but bustling city.

Without a doubt, the best area to stay in Brussels is around the historic city centre, within walking distance of Grand Place and main attractions like St Michel and St Gudula Cathedral. This means you'll be within easy reach of all the great bars, cafes and restaurants that Brussels has to offer, without having to take a taxi. In this area, there are also some excellent transport links, including the central train station, Gare de Bruxelles-Central (or Brussel Centraal, as it’s known in Flemish). From here you can easily get a train to, or from, Brussels airport. If you’re feeling adventurous you could also hop on one of Brussel’s many trams which serve the city centre.

Historic city centre, the best area to stay in Brussels Historic City Center is a haven for tourists of all nationalities. Start off your trip with a heavy Belgian meal at the Belga Queen. This is a restaurant that insists on leaving you with an ancestral Belgian flavour. Its main entrée is the Belgian dietary staple of Mussels. Other Belgian treats that are all the rage here are rabbit soaked in cherry beer and other famous seafood varieties that are 100% Belgium.

After your fill of fish start head to the Royal Quarter. About a ten minute walk from the Belga Queen, you will find the Cathedrale des Sts Michel et Gudule”. This historic building centuries ago dominated a medieval skyline. Now drowned out by modern buildings this is a step back in time when church power was made known by these gigantic architectural wonders.

This majestic Cathedral was dedicated to the patron saints of Brussels. Both St Michel and Gudele are well known in the lore of Brussels but Saint Gudele is the more popular and prominent in the minds of residents.

This female saint is represented by the symbol of a lamp that is said to be blown out by an interfering devil only to be relit when the devoted patron saint prays. Local residents are always watching to see when the lamp will be relit again by the prayers of this legendary folk icon.

West of this site can be found another scene of good conquering evil, this time by the prominent display of a statue of St. Michael slaying the dragon placed at the pinnacle of the historic, “Hotel de Ville”. The hotel that was initially built in 1406 has evolved through the years with several historic renovations. The structures that are part of this hotel fill the eyes with wonder. With visages of gothic towers, flamboyant terraces and historic courtyards, the building echoes with past and present history. This famed hotel also serves as the current seat of the Mayor of Brussels.

Other neighbourhoods to stay in Brussels

Business, cheap, with a car Brussels being the capital of the European Union, the quarter that houses all of the functionaries of this political entity is a very important site to behold. All EU institutions are linked by convenient walk paths and cycle trails making for a very spectacular sightseeing excursion.

But since walking is not for everyone a convenient metro station is available, begin your metro trip at Schuman, with this as the starting point, the first site that you will see will be the infamous star-shaped, “Berlaymont” building. This fated symbol of the European Union was the original headquarters of the European Commision until it was found to have an astronomical amount of Asbestos, it has since been remodelled and put back in use but even if it were empty the unusually shaped building draws a visitor’s attention rather quickly.

South of this staple of the European Union is the EU’s parliament building, this is the place where politicians and dignitaries truly get to business into the inner workings of the European Union. Interestingly enough, to the locals, this place is known by the name of, “Caprice des Dieux” which is translated as, “Folly of the Gods”. That’s a great way to sum up local feeling towards their appointed representatives in the European Union!

Officials may be busy in parliament but don’t be surprised if you catch one or two of them after hours trying to unwind at the sports bar, “Fat Boys” just around the corner! This is a favourite haunt for high rollers, tourists and locals alike. It is also a mainstay of American’s who love catching a game or two and munching on ribs and burgers.

Brussels' hotels are cheaper on the weekends since most of the clients are politicians and businessmen who visit it during the week for work reasons.