WHERE TO STAY IN DUBLIN FOR TOURISTS 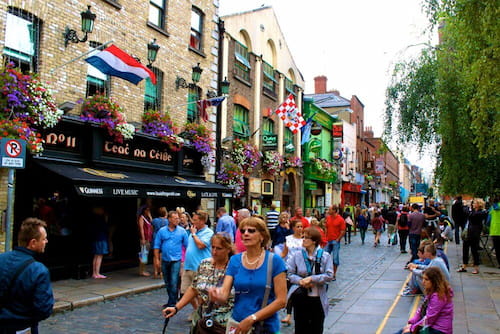 Where is the best area to stay in Dublin?

Ireland’s capital is an unmissable feast of history, culture and dining. There’s something for everyone in this lively city, whether you’re quaffing stout at the Guinness Storehouse, strolling through beautiful Trinity College or photographing deer in Phoenix Park. Expect impressive Georgian architecture, Irish pubs with live music and an excellent selection of restaurants. The city is perched on the River Liffey at the point where it meets Dublin Bay, making it ideal for day trips along the stunning Irish coastline as well as trips to the scenic Wicklow mountains.

Dublin is a small city (565,000 inhabitants in Dublin proper), which you can discover on foot. With that in mind, the best area to stay in Dublin is the city centre.  There you’ll be within easy walking distance of main attractions like the shopping district of Grafton Street, the cultural quarter of Temple Bar and Trinity College, the Republic of Ireland’s most famous and historical university. In this central area, you’ll find ample opportunities for shopping, as well as plenty of bars, cafes and restaurants to suit all budgets. You’ll also be near transport hubs such as the Busáras bus station and Pearse and Tara train stations. Buses run regularly between the city centre and Dublin airport.

On the map, which shows the most convenient area to stay in Dublin, you can see a selection of some of the best located hotels.

City Centre, the best area to stay in Dublin

If your next destination is the beautiful capital of the Emerald Island and you are searching for the best hotel locations, the following sections will tell you all you need to know to start your trip on the right foot.

As in most major capitals, Dublin city centre is the most convenient and beautiful place for short- and long-term visitors to stay. There are many reasons: easy access to and from the airport, more nightlife options, best shops and souvenirs, an array of accommodation standards and prices, well-appointed public transport, etc.

The Liffey River divides Dublin centre into two halves, South and North. No matter which side of the River you choose to reside during your stay, the city centre remains the perfect option for travellers. There are several neighbourhoods in Dublin centre that are worthy of note. Located on the South Bank of the River Liffey, Temple Bar is the top hotspot in the city, famous for its nightlife and its cobble pedestrian roads. Temple Bar is emblematic of Dublin, with its cultural spots and traditional live Irish music seven nights a week. If you don’t fancy folk culture, Temple Bar offers a number of non-traditional pubs and nightclubs, as well as the Irish Film Institute.

In Temple Bar, you’ll meet people from the four corners of the world, looking for the same thing as you: a great time. Finding accommodation here is no big deal as the area has a number of different standards of accommodation ranging from affordable hostels to 5-star hotels. Planning to do some shopping while visiting Dublin? O’Connell Street is the place for you! This is a busy shopping artery with an abundant array of department stores, designer shops and boutiques. Within walking distance from Henry Street and Mary Street you will find two top popular shopping centres in Dublin: Ilac Centre and Jervis Centre. Also on Henry Street, you’ll find the high-end Arnotts, which sells designer brands. H&M, Mango, River Island, Mark &Spencers, TK Max, Peter Mark are also available in the district. Around Christmas, as in most European Capitals, you will find a great Christmas Market on O’Connell Street.

All in all, O’Connell Street and its environs is a good area to stay and enjoy your trip to Dublin. It boasts of several types and standards of accommodation. If you are neither a shopaholic nor a nightlife fiend, you might prefer to stay in the quieter but attractive Portobello area. Known as the district of Art and Culture and as Little Jerusalem, Portobello (its name means ‘beautiful harbour’ in Italian) is a residential area located on the South side of the Liffey.

The Irish Jewish Museum, Bretzel Bakery and the Copper House Gallery, several pubs and trendy coffee shops and restaurants are some of the charms of an area best discovered at leisure and on foot.

With a car, with a group, young people Smithfield is located within a walking distance from the city centre and is a key area of Dublin, perfectly placed between O’Connell Street and Phoenix Park. It offers excellent access to Luas (Tram) and buses.

Smithfield is widely known for its Familiar Festivals and its Street Market. In the market you can sample multi-cultural food and many street activities for the young. If you are interested in learning something about whiskey production, you can visit Jameson Distillery, which is also a Museum. The Trinity College area borrows its name from the largest and most famous University in Ireland, Trinity College. The university, founded in 1592, boasts amongst other treasures The Book of Kells, Ireland’s most famous ancient book and artefact.

The position of the university was not random. Located on the site of a former monastery in the South-East of the city walls, and amply endowed by wealthy Anglo-Irish residents,  it was close enough to the historic heart of Dublin to become a major intellectual centre. Nowadays, it is near Grafton Street, Stephen Green Park and Stephen Green Shopping Mall. The Natural History Museum is also a few minutes away from Trinity College area.  The area is also widely known for its many hostels and low-cost accommodation. Formerly working docks close to the city centre, Docklands is now known as the Google and Facebook area. It spreads out on both sides of the Liffey River, boasting a mixture of modern architecture and historic buildings. Recently, Docklands has become a high end area in Dublin.

Hotels in The Docklands

Other areas to stay in Dublin

Sightseeing, with a car, cheap If the tourist hotspots are not for you and you don’t mind using public transport, you might want to sample local life in the the inner areas and suburbs of Dublin. On the South Bank of the Liffey River and only three kilometres from the city centre, Rathmines is a dream district - and its own city - for home buyers willing to pay a fortune.

Elegant red-brick houses, easy access to the city centre via Luas Green Line, a Multiplex Cinema, the Swan Centre Complex, a Leisure Centre, a Tennis Club and a lot of history make this an interesting place for visitors as well as permanent inhabitants. An inner residential suburb on the North Bank of the Liffey River. Wide and green streets, quiet, friendly, and above all, very safe, Drumcondra is on the route to Dublin Airport, and convenient if you want to stay near the airport. A wave of revival of small businesses has brought back a community feel.

At the same time, Drumcondra is the home of Dublin City University (DCU), and so has become a student district. Griffith Park, Croke Park and the Botanic Gardens are all worthwhile sights in Drumcondra.