WHERE TO STAY IN EDINBURGH, SCOTLAND 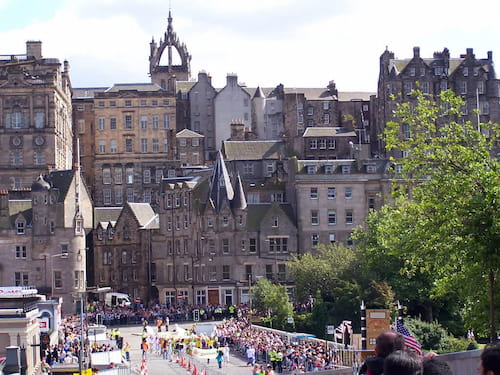 What is the best area to stay in Edinburgh?

The capital of Scotland, Edinburgh, is uniquely Scottish through and through, from the atmosphere to the modern and medieval architecture. The city is relatively small in comparison to most other capitals but this in fact makes it very convenient to see the majority of the tourist attractions. The city is simply beautiful in that it mixes the modern era with the medieval times and therefore appeals to all audiences.

The best area to stay in Edinburgh is the Old Town as it is suitably located in the city centre. Here you will find plenty of medieval and 16th century architecture including gothic churches and cathedrals, beautiful palaces, various amazing museums and galleries and of course the imposing castle. The Royal Mile is the famous strip that links most of the attractions and has a great nightlife with many pubs and bars found along it.

Shopping is definitely on the cards with many decent markets and shops that have some of the quirkiest and most traditional souvenirs like kilts and whisky. The various ghost walks must be done once to get a thrill or two as the city is one of the most haunted on earth and this area is home to the best hotels and restaurants.

On the map, which shows the best place to stay in Edinburgh, are located a selection of the best hotels according to the opinions of Tripadvisor users. By passing the cursor over the icons, you can see the exact address of the hotel and the link where you can make a booking. Best Location Hotels offers a selection of the best-rated hotels, located in the best area to stay in Edinburgh, Scotland, and also provides the link to the hotels for information and booking.

Old Town, the best area to stay in Edinburgh The Old Town is where you will find all the historic sites, which Edinburgh is world famous for, and there are so many things to see and do in the area. Probably the first attraction that any tourist will visit will be the Edinburgh Castle, which sits on the most elevated land in the city and therefore daunts Edinburgh and makes your photos look absolutely stunning. The castle has been in use for the last 1000 years and has honoured many royal family members, which has been marvellously preserved.

The Palace of Holyroodhouse is right at the other end of the Royal Mile to the castle and is a royal residence as well hosting the Queen’s Gallery, which is where you will find some beautiful artworks from the Royal Collection. As previously said, between the castle and palace is the Royal Mile, which has the following attractions along it: St Giles’ Cathedral, Parliament Hall, Greyfriars Kirkyard, the Scottish Parliament, North Bridge, Mary King’s Close and Gladstone’s Land. The Royal Museum of Scotland displays royal items, documents and photos as well as explaining Scottish history and showcasing weaponry, pottery and other industries that have come to pass in the country.

The Camera Obscura is a tower that has wonderful views over the city as well as using light from the top of the tower to a dark room that has a large dish in it, meaning that tourists get a 360 degree view of the city.

Away from the historic sites the old town has various parks, which gives you a perfect place to chill, wander around, cycle, play games or have a picnic. There are also many walking tours as well as ghost tours that will be sure to creep you out but there is no better place to do it because many people have said they have seen unexplained shadows and figures. If you are looking for a bit of shopping then head to Victoria Street and Cockburn Street, which are full of independent and alternative shops with excellent purchases to be made.

There is a little bit of everything in terms of cuisine and if you like Indian, French, Vegetarian, Thai, American, Chinese, Mediterranean and of course traditional food, then head to the Old Town. All along the Royal Mile and streets off it there are traditional pubs that serve local ales and lagers as well as brand new cocktail lounges that host various live performers. The area is packed with hotels, which range from low budget to some of the most expensive and luxurious places in the city that offer magnificent views of Edinburgh.

Other areas to stay in Edinburgh The New Town borders the Old Town and therefore you are never too far away from one or the other. Most of the architecture here is from the 18th century from the Georgian Period and is where you will find excellent galleries including The National Gallery of Scotland and The Scottish National Portrait Gallery. These two are as impressive on the outside as they are on the inside, which show much of Scotland’s finest artworks and hold many different exhibitions throughout the year.

The Georgian House tells the public how people lived back in this era and gives a great insight into this period and the Dean Village dates back to the 12th century, which is home to the flour mills that served Edinburgh for centuries. The main reason for people coming here is because it is the city’s main shopping and commercial district and George Street, Princes Street and Broughton Street have an amazing of variety of stores, bars and restaurants. Also, the area has a good range of hotels with most of them intended for mid-low budget categories but they are more than adequate. This neighbourhood is just to the north of the New Town and is much quieter than the main city centre but has wonderful independent shops as well as being home to one of the most visually beautiful spots in the city, the Royal Botanic Garden.

The garden has a brilliant range of plants and flowers that have come from all over the globe that is even home to the Rock Garden and the tallest palm house in the UK. There are also a good number of galleries and many designer shops in the area but unfortunately doesn’t have too many hotels or restaurants to check out, but the ones that are there are perfectly fine. North of the New Town is one of Edinburgh’s most interesting areas to stay, Leith. Historically important as the city’s port the neighbourhood has recently bounced back strongly after a period of industrial decline. Since the Millennium Leith has seen waves of redevelopment and gentrification, without losing a character that separates it from the more upmarket – some would say stuffy – neighbourhoods on the city’s southside.

In the past two decades, the area has gained a wave of new cafes, restaurants and coffee shops to sit beside a host of traditional pubs. This is especially true around the refurbished harbour at the Water of Leith. On the water's edge and linked to the town centre with frequent buses, the Ocean Terminal mall provides a relaxed shopping and dining experience with great views of the Firth of Forth. It's aslo currently home to the Royal Yacht Britannia.

Closer to the town centre, Leith Walk will provide some great accommodation options for those looking to save a little on the sometimes eye-watering prices in the Old Town. Guests are advised to bring good shoes for the walk up and down the hills.