WHERE TO STAY IN MADRID 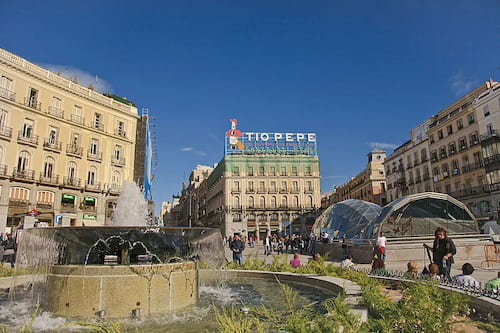 What is the best area to stay in Madrid?

The best area in Madrid to stay is the city centre, not far from the square of Puerta del Sol. In this area, you’ll be within walking distance of attractions like the Plaza Mayor, the Royal Palace and the main shopping street of Gran Via. You’ll find plenty of shops and restaurants to keep you occupied here. The city centre has excellent transport links with several metro stations dotted around, and there is also a hop-on-hop-off tourist bus that stops on Gran Via.

For art lovers, architecture buffs and foodies, the Spanish capital of Madrid has much to offer. From medieval mansions to grand palaces, this is a city that’s proudly beautiful. Take in famous artworks from Picasso, Dali and Miró at some of Spain’s finest art galleries, including the Prado Museum, the Reina Sofía National Art Museum and the Thyssen-Bornemisza Museum.

Feast your eyes on the tapestries and high ceilings of the Royal Palace, or seek out turtles and peacocks at the pretty Retiro Park. Football fans will love the Santiago Bernabeu stadium, home of Real Madrid. Or, why not sample delicious olives and seafood paella at the bustling San Miguel Market.

Centro, the best area to stay in Madrid Colloquially called by locals as “el Centro” –– Madrid may be the heart of Spain, but the Centro is the heart of Madrid. Whether you’re a history buff, architecture nerd, art lover, sports fan, nature enthusiast, experienced bar hopper or even food connoisseur, Madrid’s Centro is bound to have something just for you.

It’s well connected to the rest of the city, with Metro line 1 encompassing most of the important sights and attractions here. Anyone who is anyone makes their way to the Centro at least once in their visit. Tourists from all over the world and even from within Spain make sure to come by and see what the capital city has to offer. From art galleries and night clubs to fashion shops and sports venues, this place has it all.

As all sorts of people from all walks of life make their way here at least once, many hotels and hostels alike can be found here. A lot of them can be found near the iconic Puerta del Sol, or even around picturesque Plaza Mayor. More boutique hotels can be found around the museum belt of the centro. High-rated hotels and even some well-located apartments can be found here as well.

Other neighbourhoods to stay in Madrid For those who enjoy the finer things in life, a long stretch of premium shops awaits them in the Salamanca neighbourhood. This is where you’ll be able to find premium, high-quality shops. Some of the shops found here even have their sole location in the city in this area!

After a long day of shopping, the food scene here mirrors the grandeur this neighbourhood exhibits. Restaurants in Salamanca live up to the area’s high-end reputation and luxurious setting, as this is where you can find restaurants that have some Michelin stars.

Its neighbour Goya is often synonymous to it. Found at the tail-end of Salamanca, Goya acts as an extension to the Salamanca neighbourhood…just in case you wanted more. A lot of independent shops and modern contemporary dining experiences can be found here, attracting the more budget-friendly, yet social-conscious crowd.

Bars, restaurants, without a car Situated in between Madrid’s centro and the museum belt (where you’d find the famous Prado museum, Thyssen-Bornemisza museum, Reina Sofía museum, and CaixaForum to name a few), the Barrio de las Letras neighborhood boasts a magnificent location to stay.

The two theatres found in this area produce many cultural shows like dance recitals, theatrical plays, stage shows, and dramatic presentations. Before and/or after these shows, one can enjoy a drink or two in the many bars and cafés found here.

Cheaper hotels, close to the airport, with a car Only in Madrid for a layover? The San Blas area of Madrid is close to the airport.

This suburban area is little bit outside of Madrid’s centro, giving it a nice, relaxed, homey feel––which is not exactly your usual touristic Spanish experience. Expect to be dealing with less bars open until the wee hours of the morning when you’re here. Nevertheless, it’s still a nice area to wind down and get away from the fast-paced capital city, without venturing out too far.

Come during the springtime, and if you’re lucky, you might catch the almond tree blossoms blooming at Quinta de los Molinos park. Other times during the year, enjoy the quiet, laid-back vibe this area has to offer by hopping into one of the neighbourhood bars and restaurants run by locals for many years.

Parks, with family, with a car Many universities and schools surround the Moncloa-Aravaca area, making it have the perfect nighttime scene for young professionals and students alike. This area is also perfect for those who want to have a breath of fresh air within the bustling city.

Madrid may lack a beach scene, but this area makes up for it. Take a stroll along the stretch of Manzanares river or hit up the Zoo Aquarium or Parque de Atracciones to be near water. If you’re not a huge fan of the water and prefer greener pastures, make your way towards the massive Casa de Campo. People crowd around nearby Templo de Debod or one of the best sunset views in Madrid.

Moncloa station is also a gateway to nearby towns around the autonomous community of Madrid, as well as other regions in the country. Malasaña is a barrio in the centre of Madrid which is a fun neighbourhood  to stay, especially if you want to sample the city’s cutting edge nightlife. The most famous street is Calle Espiritu Santu which stretches from east to west and is the perfect place to start the day with an espresso in the Lolina Vintage Café. Well known for its neon lighting and colourful seating. A wander down the street reveals hippy cafés, bookshops and a whole plethora of trendy dives.

The tempo changes as the sun sets. Malasaña is famed for its quirky nightlife and if you want to enjoy it, you must adopt local timings! Sharing a drink with friends starts around 8.00 pm and people don’t get to their favourite tapas bar until gone 10.00 pm! The clubs don’t open until late, but regularly stay open until 06.00 – no wonder daytimes are spent at a leisurely pace! The nightlife is so good that you will find it a favourite with Madrileños (residents of the city) There are a few clubs to enjoy including Tupperware which has a live DJ and great dance floor. You may well have the feeling that you have seen Chueca before, and you could have done, as it is a popular location for film makers. It is also the perfect destination if you are looking for somewhere that has good shops, great street cafés, fine restaurants and an exuberant nightlife and everything focuses on the main square – Plaza de Chueca. If you fancy a browse in an unusual shop Almirante 23 has thousands of geographically and thematically classified postcards as well as an eclectic selection of 19th century objects including toys, trading cards and badges.

Situated in the heart of Madrid and just east of Malasaña, this district has a gay community and is a focus for gay art. In late June/early July there are the famous gay pride parties and Chueca gets incredibly packed. By day there are shops and galleries to browse in and interesting places to discover like the church of San Anton where the bones of Saint Valentine are kept. An evening stroll can end at one of the many bars or really good restaurants before heading to one of the lively nightspots such as Black & White, Delirio and Long Play - which gets incredibly busy. The Chamberí neighbourhood, or “barrio”, is a good place to stay if you want a more authentic experience of Madrid, in a more local area. The area isn’t nearly as bustling as the City Centre, there are just a few traditional shops and tapas restaurants that are mainly frequented by the locals.

At the heart of the neighbourhood is the Plaza de Chamberí, which is a nice open space where people walk, talk, and meet. There are always people in the square, which gives the area a friendly and safe atmosphere, making it popular with young people and families alike.

Most people that stay in Chamberí when visiting Madrid do so to avoid the inflated rates of hotels in the City Centre. Chamberí is a much more affordable area, and it’s still possible to visit all of Madrid’s main attractions on foot from here. Alternatively, you could make use of the modern and efficient public transport in the area. Chamberí is also next to Salamanca, so if you want to experience the impressive streets of the city’s most exclusive location without paying to stay there, Chamberí is a good place to stay.