WHERE TO STAY IN RIO DE JANEIRO 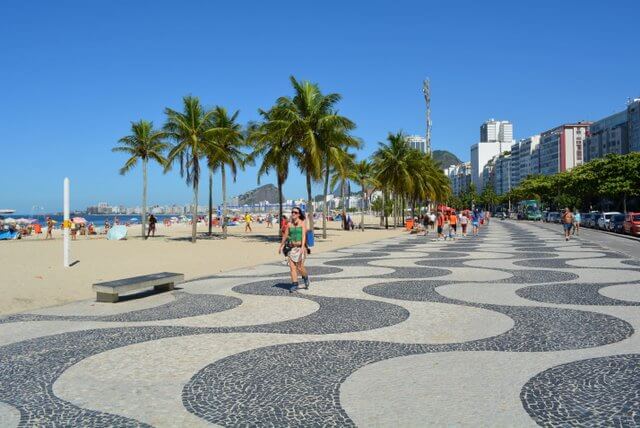 Where is the best area to stay in Rio de Janeiro?

The best area to stay in Rio de Janeiro is by far the district of Copacabana as this area is home to many luxury hotels as well as less expensive places to stay at. The magical five-star Hotel Copacabana Palace is found alongside the beach, which has excellent views of the ocean. Also, there are numerous restaurants, bars and shops that pop up all over the district and all-in-all, Copacabana gives you that authentic Brazilian experience.

Rio de Janeiro is one of the most breathtaking cities in the world and is perfectly located on dramatic and lush green mountains, which hit the heights of 704 metres (2,310 feet) that seep into the south Atlantic coast, which offer photographers some of the best city shots in the world. This is Brazil’s second largest city and is well known for its laid back style and beach culture as well as its hugely popular and wild annual carnival.

Rio de Janeiro is absolutely blessed with some of the best scenery and therefore is one of the prettiest cities on earth. Some of the world’s most famous sites are found here like Sugar Loaf Mountain, Christ the Redeemer, Maracana Stadium and some of the world’s most famous beaches like Copacabana. But it’s not just the sights that make this place so special, it is certainly the people that welcome you with open arms and are always in that positive and party mood.

Copacabana, the best area to stay in Rio de Janeiro 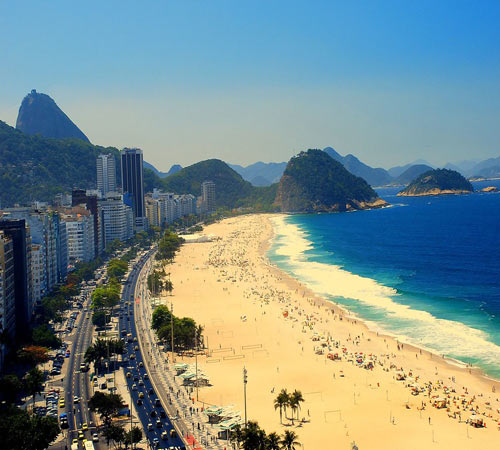 When you think of Rio, one of the first images that pop into your head is the white sandy beach of Copacabana and its gorgeous, blue and clear sea. Located in the south of the city, Foreigners and locals alike pack this 4km long beach that can sometimes be exceptionally busy and don’t be surprised if you pass an A-list celebrity sunbathing on the beach.

The beach has many vendors that sell drinks, food and souvenirs and the beach is regularly used for free concerts and festivals throughout the year. Hotels line the beach as well as the streets and alleyways behind, which tend to be cheaper than those on the waterfront but above all, the neighbourhood has so many amazing and top quality hotels.

The beach is also perfect for surfing and has world-class waves and there are many surf companies that can take you surfing or just hire your own equipment. The beach doesn’t just have surfing as it has many water sport opportunities including swimming, windsurfing, parasailing and banana boating. The beach is also home to two historic forts, which are found at either end of Copacabana with the one at the north end built in 1779 and the other was built in 1914. Along the promenade, you will find many excellent restaurants, which offer a wide range of cuisine including traditional Brazilian food, Japanese, Chinese, European as well as other South American cuisine.

If you are lucky enough to be here for New Year’s Eve, then you are in the best place to celebrate it as the fireworks display at the beach is one of the biggest in the world. It lasts for 20 minutes and attracts around 2 million people and therefore the hotels get booked up early so keep this in mind. This neighbourhood is also one of the safest areas in the city and has lots going on in the night with many samba musical performances at bars and clubs along the promenade.

Another reason to stay in the Copacabana neighbourhood is that you are not too far away from other major attractions in the city. The famous beach area is well connected too and a short bus ride can get you to the mountain of Corcovado, where the 38 metre statue of Jesus Christ, Christ the Redeemer, can be seen. Sugar Loaf Mountain is close by, which is one of the most fascinating places in Rio and it’s where cable cars take you up to the mountain and provide some of the most iconic views Guanabara Bay and the city. Copacabana is also very close to another famous beach, Ipanema Beach, which is great for swimming and surfing as well as being one of the best to see the sun go down.

Other places to stay in Rio 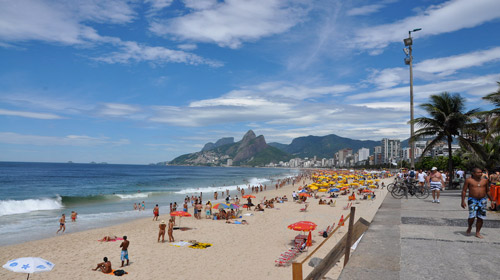 Birthplace of ‘Garota de Ipanema’ song, Ipanema has breathtaking Stone of Arpoador with its beach, where people gather every day to watch a stunning sunset. Kiosks on the boardwalk sell caipirinha, a Brazilian beverage and typical snacks. Beach is not everything though: there are museums, as the thought-provoking Favela’ Museum. You can choose among luxury hotels and low-priced hostels in Ipanema, with a great range of price and amenities. It’s easy to move around by subway and by bus. Though it’s not recommended to use expensive stuff, police patrols are constant and there are a police station specialized in tourism.

Next to Ipanema, Leblon is better know as the celebrities’ neighborhood, the home of famous Brazilians actors and singers. As in Ipanema, you can choose to get a room in an extravagant hotel or in a cozy hostel to stay. The wonderful beach is the main attraction, but you can also go to Leblon Gazebo or experience the Cliff Park Dois Irmãos and get a marvelous sight of beaches in Ipanema, Leblon, the Christ Redeemer and have a picnic. In a rainy day the Leblon Shopping can be a well-coming refuge. Subway and bus are the best to move around. 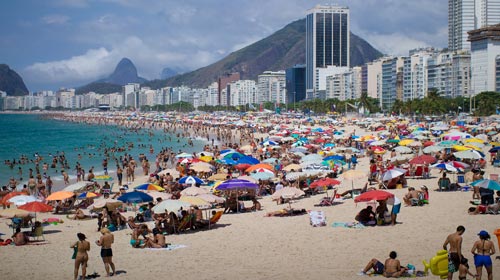 Before anyone get to the famous Copacabana, they must pass through the small Leme. This place has it all: the beach and the . The Leme Gazebo provides a beautiful sightseeing of the place. The mountain, Babilonia Hill, provides culture and entertainment. You can opt between a lavish hotel in front of the beach or a comfortable pension on the hill. Riding a bike is a very good way to move around and you can travel all the way to Copacabana in 20 minutes. There is a shopping mall, named Rio Sul, that can be reached by subway and bus.

One of the dearest places in city, the historical Santa Teresa holds the carioca way of life. There are many ways of getting a fine accommodation, from over-the-top hotels to welcoming hostels. Activities for daytime includes the Rato Molhado Gazebo, from where all downtown can be seen, as well the Guanabara Bay, and the Parque das Ruínas, a beloved cultural center. In many studios you can see artists working and buy from them. Night is exciting with bars and live music. The trams that travel the narrow streets are a must, but you can also get a bus from downtown. 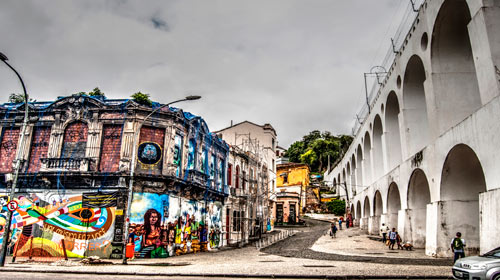 Lapa is better known by its vibrant night life with pubs, street parties and all kinds of music and dancing lasting until the dawn. But there are much to do in daytime also. Lapa is a historical spot and Lapa Arches, former aqueduct, are the most notorious site. Hotels and hostels, some of them placed in 19th century buildings, blend the old and the new architecture. There are no shopping malls in the region, but you can visit the downtown popular market Saara and the antiques and street fair of Lavradio Street. Bus lines and bicycles are the best transport.

Jacarepaguá, in the West Zone of the city, has a lot to offer, mainly if you want to flee from the places that already are full of tourist. All kinds of hotels and hostels are available near the beautiful beaches of the region. One of the highlights for daytime is to go for a walk in Pedra Branca Park, considered one of the biggest urban forest in the world, with beautiful waterfalls and lagoons. At night, bars offer good food and drinks at a low price. Bus lines, and the new BRT system are the main way of public transport. 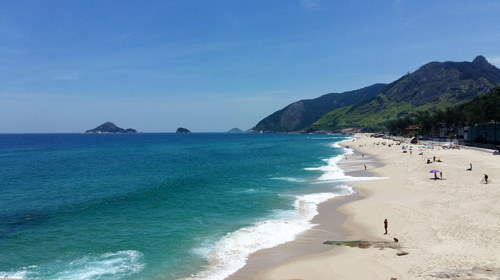 Recreio dos Bandeirantes is another neighborhood of West Zone of Rio de Janeiro that can be reached mainly by bus lines and BRT. Though it has a bright night life with bars and live music, Recreio is best known by its beaches, with the spotlight on Recreio Beach, Macumba Beach and Secreto Beach. You can get to them using public transportation but going by car is more comfortable. Hotels and hostels provide fine accommodations near the beaches, so you can rest after one of the hiking trails available around. Remember, though, that you should never go in a trail alone.

Barra da Tijuca has amazing ‘hidden’ beaches. You can get to your hotel or hostel by bus, BRT or subway but Grumari Beach, for example, can be reached only by car, and it’s all worthy. Right next, you will find a nudist beach called Abricó – more hidden than Grumari. The neighborhood also has Pedra Bonita, a cliff where you can do hang-gliding while enjoy a spectacular sight. The Brazilian Football Team Museum deserves a visit too. You can finish your night watching a performance of a Brazilian singer in Barra Music, at the mall or in a kiosk on the beach. 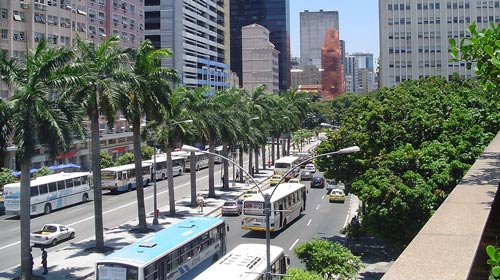 The downtown area of Rio de Janeiro is full of historic sites and is a good place to hang out in at nights with many things to see and do. Tourist attraction include: Cultural Centre, City Hall, Municipal Theatre, Benedictine Monastery, Carnaval Museum, Museum of Modern Art, National History Museum and palaces like Gustavo Capanem and Ilha Fiscal.

At night, there are millions of places to check out including various bars that play live traditional Brazilian samba music along with traditional dancing and is one of the best areas to try authentic Brazilian food and drinks such as fish dishes and cocktails like Caipirinhas. There are also many nightclubs, where international DJs come to play and you can dance the night away but the only thing the area lacks is the amount of hotels as they are few and far between and rooms can be scarce, especially if there is a concert, festival or carnival on.

*Safety rules are pretty much the same everywhere:

• Don’t use fancy stuff. Really. Most crimes occurred with tourist in Rio is theft. Thugs prefer distracted people with jewelry, expensive smartphones and iPods. All valuable things must stay in hotel safe with passport, but it’s important to carry always at least one identification document. Avoid empty streets and places. Avoid going out all alone.

• Trails: don’t go alone. Get a guide if possible.

• Beaches: though they are usually calm, they can be dangerous sometimes. People can search on internet if a beach is or not proper to bath or if it is rough. Look if there are any lifeguard men on the beach. When there I a red flag on a beach, that means it is dangerous going into. And sunscreen is a must.