WHERE TO STAY IN GENEVA, SWITZERLAND 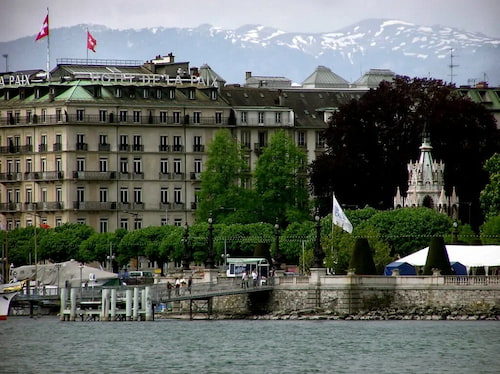 Where is the best area to stay in Geneva?

The Swiss city of Geneva is inspiring and usually compared to a big box of chocolates when it comes to deciding what to do and see, as there is a huge choice. Often used as a connection hub for the snowboarders and skiers who make their way to the Alps, Geneva is set in an exceptionally pretty area, surrounded by mountain views. Water dominates the city itself: Lake Léman, the Rhône river that flows from it and the giant fountain at the end of the Lake grace this elegant city and give it its distinctive look and feel.

The best area to stay in is the city centre of Geneva. The area includes many of the tourist attractions, with most neighbourhoods being accessible on foot. The foot traveller will find romantic and scenic routes, which allows you to take in the amazing architecture built over different eras, as well as the beautiful skyline and the Alpine views over the lake. You will also find a great number of museums, art galleries, parks, shops as well as some exciting nightlife - including restaurants, pubs, clubs, theatre and concert venues and top-notch hotels.

City Centre, the best area to stay in Geneva Geneva is a city of contradictions. At the same time a 2000-year old relic, a graceful European city and a modern business and international hub, Geneva constantly renews itself. It’s a city of no skyscrapers from which emerged Le Corbusier, the most famous of all modernist architects. It has a long hospitality tradition, and many of its luxury hotels were built in the 19th century, the golden age of the grand hotels.

The most noticeable feature about Geneva is that it is split into two ‘banks’ by the Lake and the River Rhône, making it two cities in one, with distinct characteristics. The Left Bank is where much of the shopping district is situated. It has several neighbourhoods, including the Uni-Bastions (the university and Parc des Bastions), the Old Town (on a hill) and the Rues-Basses (lower city). The Right Bank has most of the prestigious hotels, but also the alternative and working-class district of Les Pâquis. Most of the well-known hotels are on the Right Bank of the Lake. The 19th-century hoteliers chose that stretch as it affords extraordinary views across the Lake and towards the Alps, especially the Mont-Blanc. That view is so famous that it gave its name to a promenade - ‘le Quai du Mont-Blanc’. Along with the Quai des Bergues and the Quai Wilson, named after the US president who sponsored the League of Nations, these waterfront avenues constitute the most stunning (and pricey) real estate in Switzerland.

Some of the grand hotels were bought up by global groups in the past three decades, like the Mandarin Oriental, the Four Seasons Hotel des Bergues or the luxury boutique Hotel d’Angleterre, while others, such as Le Richemond, are still proudly independent. Even if you can’t afford much more than a cocktail or breakfast at one of those prestigious hotels, they are a tourist attraction and well worth a visit.

Les Pâquis: the Right Bank beyond the grand hotels The Right Bank beyond the grand hotels is a quirky neighbourhood known as Les Pâquis. It boasts many restaurants, cafes and psychic shops, as well as the red-light district. Its only department store is Manor, which is part of a Swiss chain. Otherwise, its shops are mainly small and alternative, or the luxurious watch and chocolate shops on the rue du Mont-Blanc.

It has several boutique hotels - some luxurious, like the Ritz-Carlton Hôtel de la Paix on the Quai Wilson, and some mid-range but of high quality, like the highly-rated N’VY on the rue de Richemont. While staying on the Right Bank, on a hot summer day, you can bathe in the lake at the Bains des Pâquis, a lakeside lido. Between September and May, the Bains become a sauna and hammam. The Old Town and its surrounding neighbourhoods have several excellent hotels, with the added pleasure of staying at the heart of historic Geneva. A short way from the cathedral and the Maison Tavel (the oldest house in Geneva) and right next to the row of cannons, you can stay and eat at Les Armures, a charming boutique hotel named after the armoury that once stood there. It’s both a hotel and a well-known restaurant for traditional Swiss mountain food like cheese fondue. The Old Town is worth visiting all year round, with its Roman ruins in the cathedral crypt and its 400-year old houses, but during the annual Geneva music festival (Fête de la Musique), its twisted streets and intimate courtyards come alive with music of all traditions. It is not known for its shopping, but several small antique shops, art galleries and curios dot the narrow streets.

Past the University and the Parc des Bastions with its Reformation Wall, two other boutique hotels, the Tiffany and the Cour des Augustins, cater to travellers drawn to a lively and cultural area, vibrant with museums, cafes and restaurants. The nearby Plaine de Plainpalais boasts the largest flea market in Europe, every Wednesday and Saturday. On the other side of the Old Town, on the Place Longemalle near the Rues-Basses, you can stay at the charming La Cigogne.

The Rues-Basses, the Geneva high streets, contain a mix of shopping venues, from department stores to high-end boutiques, to more modest high street shops. Two large shopping streets dominate it - the Rue du Marché and the Rue du Rhône - with adjacent smaller streets. This part of Geneva has very little nightlife, but beyond it, towards Rive, there are a handful of night clubs. The Rue du Rhône has one famous hotel: Le Métropole, the only lakeside grand hotel on the Left Bank. From the Rue du Stand to La Jonction, along the Rhône on the Left Bank, there is no noteworthy place to stay apart from a friendly youth hostel. However, the area is home to the famous L’Usine, a night-club, alternative music venue, and art centre. In the middle of the river, on an island joined by a bridge, there is another art centre, in a restored 19th-century industrial building called Le Bâtiment des Forces-Motrices, now a theatre.

It would be a mistake to believe that the grand hotels of the Right Bank or the boutiques of the central Left Bank represent the only attractive accommodation in Geneva. Though this international city is expensive, and as such, there are no ‘cheap’ hotels or B&Bs, there is good accommodation to be found all over town and in some of the suburbs and villages of this small canton. Public transport is good and reliable, so no matter where you stay in or near Geneva, you will find it easy to get about. Further along the Lake on the Left Bank, past the English Garden, you reach the elegant Parc de la Grange, with its two theatres and a delightful summer music venue. Beyond that, you’ll find the large Parc des Eaux-Vives, named for the neighbourhood of the same name.

Two hotels are recommended in the area - Le Diplomate and the Hôtel du Parc des Eaux-Vives.

Other areas to stay in Geneva Beyond the city centre, there are areas of Geneva well worth investigating for accommodation. The popular Carouge, a town adjoining the city of Geneva and a lively, cultural area, is a fun place to start your Geneva adventures. It has several art galleries and boutique shops.

Its Auberge, in the centre of town, is recommended for accommodation and food. Carouge is known for having an excellent nightlife – jazz clubs, night clubs and a number of small and trendy venues.

Villages beyond the city For those who wish a retreat from the bustle of the city, the greater Geneva region boasts some charming village inns, including the Auberges in Confignon, a village of vineyards, and in Hermance by the Lake. Food is generally good in the Auberges.

On the other side of the Lake, there are pleasant places to stay in Versoix and on the French side, in Divonne, well linked to Geneva via public transport. Near the village of Bellevue is the luxury hotel and spa La Réserve, by the Lake. On the Right Bank, up beyond the Wilson quay and the central station, you reach the international area of Geneva. Thegraceful Art Déco Palais des Nations is at its centre. It houses of the United Nations European headquarters and you can visit it daily. Nearby, you might walk past the headquarters of UN agencies such as UNHCR and WIPO,or a host of NGOs and smaller agencies.

Beyond it, you canwander up towards the International Committee of the Red Cross in Carlton House, take in the beautiful Ariana Museum, and finish your stroll at the castle of Penthes, with its stunning views and cultural offerings. There is little shopping in the area, and few places to stay apart from the InterContinental, but no visit to Geneva is complete without it. Close to the airport, as well as the usual airport chain hotels, visitors can stay in the villages of Grand-Saconnex or Vernier, and in the historic town of Ferney-Voltaire, on the French side.

For those visiting Geneva for an exhibition at the Palexpo Exhibition Centre, such as the International Motor Show in March, these areas are probably the most convenient.