WHERE TO STAY IN HELSINKI, FINLAND 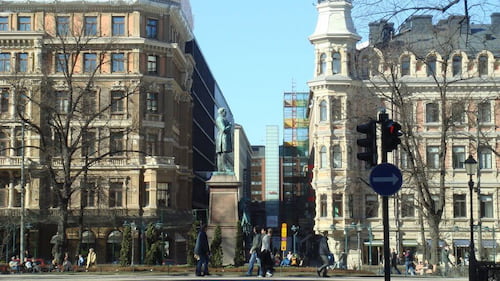 Where is the best place to stay in Helsinki?

This fascinating and amazing snow-covered city is particularly stylish from the people to the architecture, through to the bars, restaurants and hotels. This European transport hub is found on the southern coast of the Baltic Sea and is famous for its public saunas, which is a great way to warm up in this Scandinavian chilly city. Helsinki is awash with museums, gorgeous green parks, striking architecture and delicious food, however, the local people is what makes the place as they are exceptionally friendly to tourists.

The best area to stay in Helsinki is the city centre, especially in Kammpi as you are central to everything on offer in the city. This area is home to some of the city’s most extravagant museums, parks, religious buildings and monuments as well as excellent shopping with various markets and shopping centres and is one of Helsinki’s main nightlife neighbourhoods. This area also has the most amounts of restaurants that offer a brilliant range of cuisines and there are plenty of hotels that you can choose from.

On the map, which shows the most convenient area to stay in Helsinki, you can see a selection of some of the best located hotels.

City Centre, the best area to stay in Helsinki

One of the most satisfying things about Helsinki is that even though it is a capital city, it is more like a large town as most things to see and do are relatively close to each other. The centre consists of plenty of old buildings like the famous Tuomiokirkko, streets full of marvellous shopping, traditional cafes, classic Finish restaurants and the esplanade park. The ‘Big White Church’ being Tuomiokirkko is a cathedral, which happens to be one of the most famous landmarks in Helsinki and was built in the mid 19th century. From the bottom of the beautiful and numerous steps, this towering cathedral daunts everything that comes before it with its angelic and striking white walls and the green domes on top finish it off delightfully.

Another iconic religious building is the Church in the Rock, which was literally dug out of rock with the roof made out of 22 km of copper strips and resembles a UFO that has crash-landed. Other worthwhile religious buildings to see include Uspenski Cathedral and is particularly famous for its five domes that are topped with 22-carat gold and the Old Church of Helsinki is the oldest existing church in the city, which was built in the 17th century.

Nearby is the central market square, Kauppatori and as well as being home to many stalls that sell anything from fresh food to beauty products, it is also home of the Havis Amanda fountain. The nude female mermaid was sculpted in 1906 in Paris by a famous Finnish artist, Ville Vallgren, who wanted this to symbolise the rebirth of the city. From the market it is possible to get the ferry to one of the most beautiful islands off the coast, which is Suomenlinna, or head south to the old market hall where you will find the most exquisite gourmet food boutiques.

However, if you are looking for a more up-to-date shopping mall, then look no further than the Kamppi Shopping Centre as it is home to many leading brands that sell various items be it electronics, men wear, women wear or jewellery. After some shopping, there are a number of relaxing things you can do including visiting Esplandi Park, which is a great small park that has cafes and restaurants and is regularly visited by street performers and bands. If the park isn’t quiet enough then the Kaisaniemi Botanical Gardens hopefully will be and is where you will find many Finnish wildflowers as well international plants, herbs and flowers.

A visit to Helsinki is never complete without a trip to the public sauna and the Yrjonkatu Sauna was the original one in Helsinki, which was first built back in 1928. It is beautiful inside as well as out and there are a number of different saunas in the vicinity, which will certainly give you some down time. There are also a good amount of museums in this part of the city with the Natural History Museum being one of the quirkiest and oldest types that has multiple floors of interesting exhibitions on various topics to do with Helsinki.

Another museum to seek out is the National Museum of Finland, which houses many artefacts to do with Finland’s history right from the start to the present. As well as the museums, there is an excellent choice of art places to see like the Kiasma, which has various exhibitions on art as well as housing the Museum of Contemporary Art. Another popular art gallery is the Amos Anderson Gallery and happens to be one of the largest private art spaces and primarily focuses on modern art from Finland and mainly local artists at that.

At night, the city centre has the best range of nightlife including going to watch a play or musical at one of the many theatres or one of the newest films at the cinema. Your best bet for finding a pub, bar or restaurant are the areas at any of the squares as they are more or less filled with them. You can pick from many trendy and traditional bars that sell local or international beer as well as rock bars, cocktail lounges and even huge venues like The Spot that host live gigs from internationally-recognised bands and DJs.

In terms of cuisines you can select from traditional Finnish food as well as Chinese, Japanese, vegetarian, Mexican, American and many other European meals. Also, this area has a lot of wonderfully designed hotels with the majority being of high standard and have exceptionally large rooms that are well maintained.

Other areas to stay in Helsinki 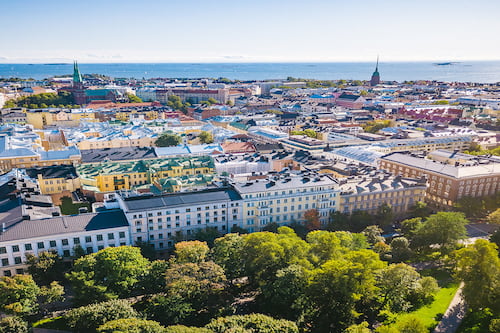 Punavuori is for Helsinki what Brooklyn is for New York, it’s densely populated, it’s diverse and it’s got a real sense of community. The inhabitants tend to be a mix of young adults and young families, as a result, this small neighbourhood has a noticeable youthful vigour and energy to it.

Located within the city’s designated “Design District”, diminutive Punavuori is home to a surprisingly large number of galleries and museums. The neighbourhood also has an abundance of stylish boutiques, bars and restaurants and the 500-metre-long pedestrian street Iso Roobertinkatu – known locally as Roba. Punavuori is a great place to just wander and enjoy city living. It’s a trendy area in a very trendy city, and it’s just fun to soak up the atmosphere.

For any visitors to Helsinki looking to base themselves for a few days somewhere central, Punavouri would be a great option. Located slightly southwest of downtown, it's just a short walk or bus journey to most of the major sights the city has to offer. In the Summer, the area really comes to life, with locals and visitors alike flocking to Sinebrychoff Park, one of the city's most important green spaces. 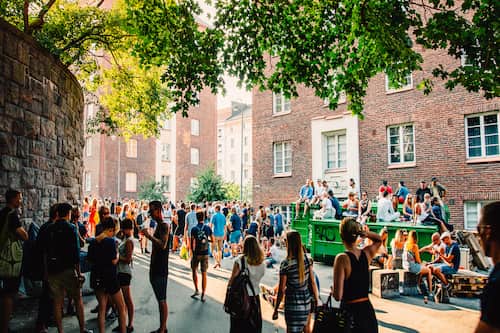 Just a kilometre northeast of downtown Helsinki, the formerly working-class neighbourhood Kallio has been through a rapid round of gentrification and is now home mainly to students, young professionals and artists. The vast majority of the properties here are studios or two-room apartments, making them ideal for those living by themselves.

Kallio is now one of the city’s hippest areas the city has to offer and a great place for tourists to base themselves. It has some of the best shops, bars and restaurants, and an array of boutiques and arty hangouts. It also has a reputation of being a little bit “bohemian” with Finland’s only redlight area to speak off – the bar-lined Vaasankatu. And from here it’s easy to walk, cycle or tram into the city centre proper.

The neighbourhood is home to two well known traditional public saunas – Arla and Kotiharju. You’ll spot them by the semi-naked towel-covered people standing outside cooling their steaming bodies in the city air. It also has two parks worth visiting, Karhupuisto Park and Tokoinranta. While the impressive Hakaniemi Market Hall – designed in 1914 by the architect Karl Hård af Segerstad – is a great place to pick up the freshest produce Finland has to offer. Expect a lot of smoked fish.