WHERE TO STAY IN BAGUIO 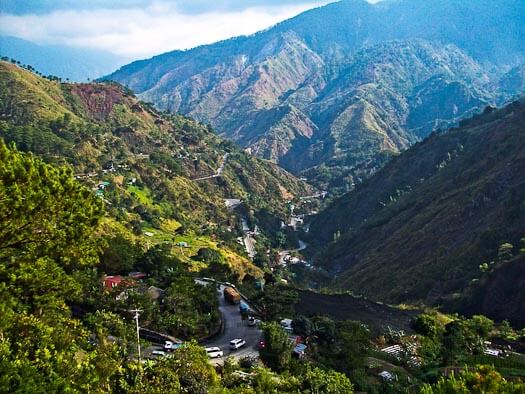 Which is the best area to stay in Baguio?

When you think of the Philippines, you may have images of glorious white beaches, sparkling clean waters and stunning palm trees so the city of Baguio may come as quite a surprise. Baguio city is nestled 1450 metres high up in the Cordillera Mountain range on the island of Luzon in the Philippines and has many nicknames like “The Summer Capital of the Philippines”, due its cooler weather as well as the “City of Pines” because of the many pine trees that surround it.

From this high up, you get some of the most spectacular sights of the country but it doesn’t stop there as the city has some excellent tourist attractions, traditional shops, various activities and a vibrant nightlife to experience.

The best place to stay in Baguio is the city centre as this is where the main tourist neighbourhood is located and contains the highest concentration of hotels, restaurants, cafes, bars, shops and tourist attractions. Most things are within walking distance of the area and the city centre has the most amount of public transportation and therefore you can easily get around Baguio if need be.

City centre, the best area to stay in Baguio 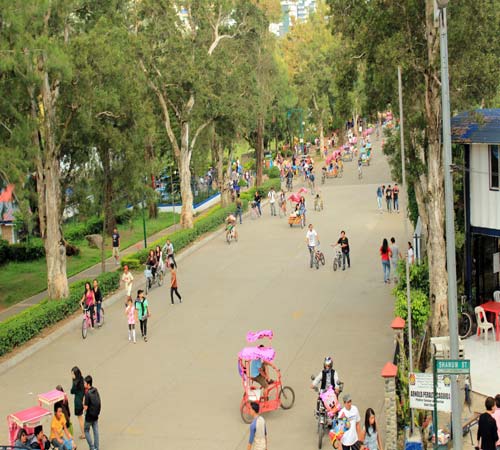 Baguio city is quite a unique place, from its location to its charm and people, there is certainly something vastly different about it than most of the country. The city centre is definitely the best place to stay in for tourists as it is the safest area of the city and has the best transport links including the central bus station. This area also has the most amount of tourist amenities and for that fact, it means competitive prices so it is a relatively cheap city.

One of the main tourist sites in the city centre is Burnham Park, which was named after the American architect who had originally planned the city, Daniel H. Burnham. This park is the oldest in the city and forms the heart of Baguio, which has many features with the main one being the man-made lake and is where you will see many romantic couples and families taking in the gorgeous vista. Other things to do in the park include playing tennis or basketball as well as cycling and having a picnic on one of the many benches that are supplied. There is also a garden that is home to various plants and flowers and the park is equipped with a diverse range of restaurants that are positioned in prime locations.

The Leonard Wood Road is where you will find the Mansion House, which is the official summer residence of the President of the Philippines with some of it open to the public like a fascinating museum that houses various pieces of art collected over the years by previous presidents. Close by to the President’s residence is the Botanical Gardens, which is an open-air museum that displays a wonderful collection of flowers and plants as well as showcasing a traditional tribe called the Igorats, who dress in their native attire and is where you can buy souvenirs. Another popular tourist attraction is Camp John Hay, which was used by the American military during their occupation and was named after President Roosevelt’s Secretary of State. It is a very peaceful place and today is used for golf, hotels, bowling, tennis, basketball, volleyball, horseback riding, a butterfly sanctuary, a museum as well as being used for camping.

The best area to shop is around Session Road as there a great amount of stores dotted along it, which sell many traditional handmade crafts made from jewellery, textiles, weaving, silverware and wood. There are also markets on at the weekend, where you can get locally produced products like vegetables, meats, fruits and various other items. Session Road also has a good selection of cuisines to try as does Loakan Road and these include traditional foods, Chinese, Japanese and some European places. The city has a fine collection of hotels, which are budget friendly, generally spacious and great customer service with some of the best places found along Leonard Wood Road and around Burnham Park.

Other areas to stay in 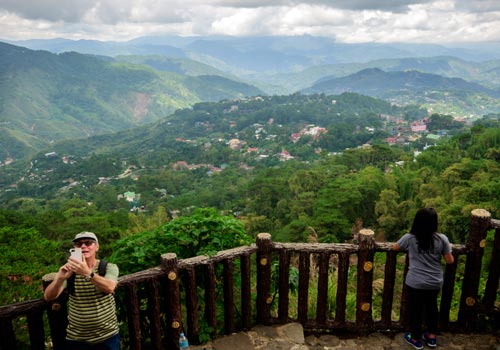 This area is close to the city centre with good public transport links and is another particularly safe neighbourhood, which are good reasons for staying in this part of Baguio. This area makes you appreciate properly your mind-blowing surroundings with Mine Views Park being the focus, which has brilliant views of the valleys, mountains and overlooks the mining town of Itogon as well as being able to see some of the native Igorots roaming the park. There are also a few markets that are open on the weekends, which have many souvenir stalls as well as places selling food and other similar tourist items.

Wright Park is close by too, which gives similar views to Mine Views though has a bit of a different angle and has some recreational activities and there some museums like the Aguinaldo Museum, which houses uniforms, weaponry and other memorabilia of General Emilio Aguinaldo. For food, drinks, shops and accommodation, the best streets are either Gibraltar Road or Arellano Street as they have a good range of each.