WHERE TO STAY IN COPENHAGEN 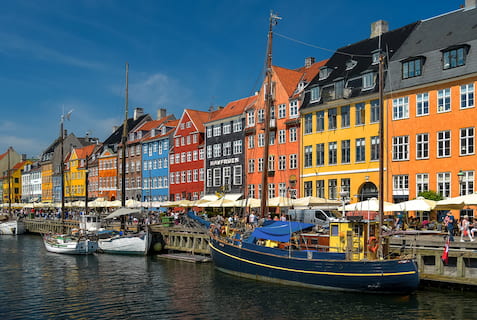 Which is the best area to stay in Copenhagen?

A city steeped in history and at the cutting edge of design and fashion, with a booming and innovative food and drink scene and a laid-back attitude to life. It’s a city with a unique vibe, creative heart and shaped by the surrounding waterways. Denmark is often quoted as being the happiest country on earth, and spending time in Copenhagen emphasizes why. An all-year-round destination, where the streets are alive in summer, yet become a festive paradise in winter. An eco-conscious, cycle friendly society, which operates seamlessly, and is the envy of many places around the world.

The best area to stay in Copenhagen is Indre By. It’s the city centre and historic heart, where postcard perfect buildings house cosy bars and restaurants, alongside waterways and grand Scandi architecture. Home to the city’s main shopping districts, which are at the forefront of fashion, and world-famous attractions including one of the oldest theme parks on earth, Tivoli Gardens. It’s a cultural hub with fantastic museums and galleries, stunning parks and many of the city’s popular nightclubs. An area where there is something to do and see for all ages and easy to navigate on foot.

On the map, which shows the best place to stay in Copenhagen, you can see a selection of some of the best located hotels.

Indre By, the best area to stay in Copenhagen The area boasts great variety – from the 19th century amusement park Tivoli Gardens, the 17th century Kastellet fortresses, ultra-modern architecture along the southern sea border, and the historic canal network around Nyhavn, which is home to 100s of bars and restaurants. Running through the heart of the area is Strøget, the city’s main shopping street, one of the longest pedestrianised streets in Europe and home to 100s of fashion shops and boutiques. The area is covered with cultural attractions, including the Botanical Gardens, National Museum of Denmark, Design Museum and the world famous Little Mermaid Statue, along with many more.

It’s also an area full of green space, with many large parks and a long promenade walkway with places to sea swim or rent kayaks and paddleboards. Well-connected to the rest of the city by metro, cycle lanes and home to the main train station – it’s the place to base yourself in Copenhagen, only 15 minutes metro from the airport.

Other areas to stay in Copenhagen Copenhagen’s creative beating heart, just north of Indre By over an inner-city lake, and an area which was named as the Coolest Neighbourhood on Earth by Time magazine in recent years. It’s a thriving multicultural hub, full of diverse eateries, boutiques, craft breweries, coffee roasteries, vintage shops and record stores.

Covered head to toe in street art and with many pop-up exhibition spaces, it’s the place to be seen in the city. Home to many of the city’s creative community, it also has a wealth of free to use futuristic public spaces including skateparks, sports facilities and playgrounds. It’s a place where the streets are always alive and are home to music festivals, street parades and sports competitions. It’s also an area where you won’t go hungry, with Michelin star Thai restaurants to Ethiopia street food, there is something for everyone. Extremely well linked to the city centre and only 5 minutes metro or cycle into the historic heart. Another focal point for Copenhagen’s drinking and dining scene, just east of Indre By and the city’s main train station. It’s an area which has been transformed in recent years and home to a unique former Meat Packing District, which now houses 100s of independent businesses including many eateries, breweries, galleries, bars and coffee roasteries. The area once housed the city’s red-light district, but has now been replaced by 1,000s of artists, families and other creatives.

The area’s streets also play host to street markets and music events, while nearby the city’s most famous music venue, Vega, hosts international artists all year around. It’s a place criss-crossed with grand boulevards, public art and a number of large street art murals. Like Nørrebro, Vesterbro has a vast array of dining and drinking options, and it’s only a short cycle or metro into the city centre and historic heart. A beautiful waterside neighbourhood, just south of Indre By, and just a short walk or cycle across one of a number of bridges to the historic centre. The area has a very relaxed vibe, full of beautiful swimming spots, and you can almost forget you’re in the centre of a major capital city. It’s home to the futuristic Opera House and the restaurant Noma, which has won awards for being the World’s Best Restaurant in recent years. It’s also home to Freetown Christiania – one of the most unique communities in Europe.

The former military base was taken over by squatters in the 1970s and remains in the hands of a hippy community 50 years later. More than 1,000 people now live there permanently, and it’s one of Copenhagen’s most popular tourist attractions – with music venues, pop-up restaurants, bars, art instillations and “Pusher Street” where cannabis is sold openly in a street market and tourists flock to smoke. The area which separates Vesterbro and Nørrebro, to the north-east of Indre By, is slowly becoming an extension of its cool neighbours. With long, peaceful, tree lined boulevards, it’s now also seeing a boom in new cafés, restaurants and bars opening to serve its growing popularity. The city’s zoo is in the neighbourhood’s centre, alongside beautiful parks, with canals and running routes throughout them.

It’s a calmer area than its hip neighbours and is a popular spot for many young families to live, but still has a cool vibe with art galleries, coffee roasteries and wine bars. It’s a perfect happy medium if you wanted to escape the hustle and bustle of the historic centre, while also being in striking distance to the lively streets of Vesterbro and Nørrebro. Like most of Copenhagen, it’s only a short cycle or metro to the city centre or its cool neighbouring areas. A beachside neighbourhood sitting slap bang between Indre By and the city’s main airport in the south. With long stretches of sandy coastline, this area is a hive of activity in the summer and is the home of a number of cool attractions including a dry ski-slope on top of a power station, a wakeboard cable park, seaside saunas and diving spots, surf schools and kayak and paddleboard rental.

It’s also home to the National Aquarium, National Symphony Orchestra, award-winning modern architecture and is now seeing popular businesses from places like Nørrebro and Vesterbro opening sister branches in the area. With long waterside cycle lanes and large expanses of green spaces it’s the perfect place to escape the busy city centre streets, which are only 10 minutes away by metro, and it’s only a hassle-free, 7-minute journey, to the airport.