WHERE TO STAY IN GUANGZHOU, CHINA 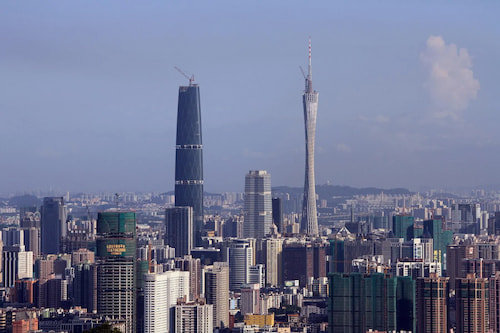 What is the best area to stay in Guangzhou?

One of the best cities in Asia, located very close to the border with Hong Kong, the city of Guangzhou attracts numerous tourists and businessmen during the year. In China, the city is particularly appreciated for its lovely and warm temperature all year round and a lot of shopping, and history present in the city. We can find a lot of documents dating back to Guangzhou thousands of years ago, in the Silk Road, and still, nowadays, it is the most important post in China. Located in the Pearl River, Guangzhou takes advantage of its proximity to Shenzhen and Hong Kong to create the world’s largest urban centre with the other 2 cities combined.

In a city of this kind with 15 million people living in, finding a quiet spot, rich in services can be a daunting task. The district of Tianhe can give you all. Located in proximity of the city centre, it offers a range of different cuisines on top of having a decent number of restaurants and shopping malls. The area has easy access to the metro and has a good community of expats living in, due to the numerous shopping centres and facilities in the area.

On the map, which shows the most convenient area to stay in Guangzhou, you can see a selection of some of the best located hotels.

Tianhe, the best area to stay in Guangzhou The central location of Tianhe has a lot of advantages in a big city like Guangzhou. First, you won’t need to change the line when moving across different areas of the city but as well having most of the facilities nearby will also help you to avoid unnecessarily changes and waste of time to travel around.

Being the new upcoming business area of the city means you’ll the opportunity to have an ample choice of coffee shops, restaurants, and shopping malls where you will be able to spend an afternoon visiting and staying in the district. In this area parks are also surrounded by the impressive plan to deliver a digital trade demonstration zone, creating thought for a prosperous future.

If you feel a bit nerd and want to explore the area the Grandview Aquarium and the Guangdong Provincial Museum are a must to embrace yourself in the local culture of Guangzhou.

Other areas to stay in Guangzhou The district once was a meeting point for merchants coming from faraway lands, however today it became a laid-back area for a stroll or some recreational fitness activities, with its parks and lovely sidewalks with plenty of trees. Located in front of the sea this facilitates the numerous coffee shops that opened here.

Due to this, it’s a perfect location for a weekend visit with your friends or family with the possibility to admire the sculptures and monuments around the parks, escaping the chaos of the city center. Most people love to come in the evening when you get a clear view of the city center skyscrapers, and you’ll get some wonderful shots with your camera/phone.

If you want to experience in your everyday life something unique head to the Shinping Medicine market should be on your list as well as the Shamian Zhanlaguan, a local museum of architecture.

Near the Canton Fair The district around the Canton Fair is in the Haizhou area in the city of Guangzhou, the main highlight of the area is one of the world’s most important fair events happening here, the Canton (another name for Guangzhou) Fair.

Despite the fact it is located so close to such an important international fair the district is the least explored (but not rightly) by expats. Canton Fair is accessible from every side of the city and it’s quite convenient to move around even by car. Different from most the areas in Guangzhou are not rich in skyscrapers but have some pagodas, two of them are particularly big and popular. Being in the proximity of the airport most of the time isn’t a guaranteed tourist spot however the Baiyun area it’s one of the best in the whole city. Located in the surrounding hills of the city, it offers a fantastic view of the skyline of Guangzhou. In addition, there’s also a great climbing park, the Maoyung Forest park where you can do trekking and get some fresh air while enjoying nature while staying here.

There’s even one delicacy that you will find only in this area of the city, the Baoyun Shanshui Beancurd Jelly, made by the river coming from the Baiyun Mountain, known for its sweetness and soft taste. The Baiyun is a district perfect for lovers of nature who don’t mind being a bit out of the city as here your best way to get to the centre is by metro. In the most ancient part of the city, the Yuexiu district is a great place to discover for avid history lovers. Well located, not far from the city center, with some shopping malls and the advantage of having the Six Banyan Trees in the middle of it, this is a very pleasant place to spend time at. The bells are hanging on the tower and it’s spectacular to be seen from the outdoor, you can even climb the 50 mt with the stairs present.

Other than that, you have the peaceful Yuexiu Park which attracts many visitors but it’s a joy to spend time within a wholesale market is the closest shop to the largest train station in Guangzhou. The fact you could have the train station close to you makes it easier to move towards other cities in China. When we talk about the Liwan district we are mentioning an area that originally was in the west part of the city as well as a large portion of the island to the west. In 2005 things changed and Liwan was merged with Fangcun district, enlarging its size of it. The area offers a lot in terms of art and museums, hosting the Lai Chi Kok Wan Chung which is an area rich in parks, entertainment, and theatres.

Mostly the characteristic and unique buildings following the Lingnan style residential buildings feature even a typical water town. Another spot where you could enjoy and relax during your stay in Liwan district, is the Ancestral temple built during the Qing dynasty and is nowadays the largest Qing temple in the whole region of Guandong.

The area is also a good spot for the local nightlife featuring a lot of bars and some good quality Western restaurants. Must visit on weekends. The district of Panyu lies completely on the Pearl River and borders Dongguan in the eastern part.Learn and taste the typical Cantonese culture in Panyu. This district is one of the oldest in the city and hosts most of the Qin dynasty buildings.

Most of the merchants that firstly met foreigners lived in this area and some of them became pirates and escape to Malaysia and Singapore. There is also a very popular saying to describe Panyu that says "the nest of Cantonese food is in Panyu and its flavor resides here’’.

This let you understand that the restaurants in this area are the real ones, hosting Cantonese local food. Parks aren’t so common here being an area mostly industrialized however you can find some lovely corners that were peaceful to relax with your friends.