WHERE TO STAY IN NEW DELHI 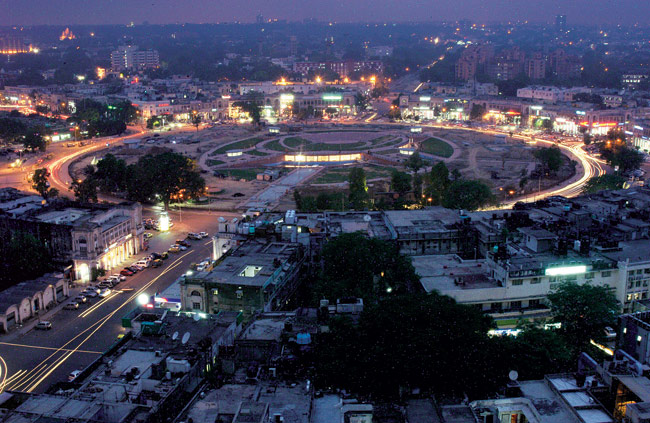 Where is the best area to stay in New Delhi?

New Delhi is a fascinating blend of historical monuments and attractions that sharply contrast with the new and rapidly developing high-tech industry. The city has its own cultural identity and is the country's colourful and bustling capital city - full of opportunity and excitement wherever you go. The city was designed by the British when the country was under British rule in the 1920s. New Delhi boasts imperial architecture, impressive gates, monuments, museums, art galleries, gardens and many other places of interest. Its people are ultra friendly and smile throughout the day. There are many excellent restaurants serving delicious local cuisine.

The best area to stay in New Delhi is Connaught Place as it is New Delhi’s colonial heart and is one of the main commercial centres in the city. Almost every visitor finds their way to Connaught Place, as it is where some of the best restaurants, shopping, hotels and night clubs are located - as well as other attractions that are well worth visiting. The area can become chaotic at certain times during the day and a visit to the central park, with its beautiful trees, shrubs and flowers, is restful and tranquil in comparison.

Connaught Place, the best area to stay in New Delhi 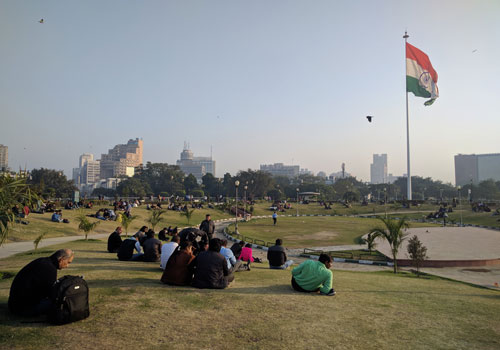 Connaught Place is a vibrant and busy area and is built in concentric circles that surround the attractive central park. Most visitors will make their way to this area for many reasons, including sightseeing, shopping and its nightlife. It is where you will also see expats walking along the streets as it has a sizeable community living there. As Connaught Place is a notoriously busy area for both locals and tourists, it will come as no surprise to you, that there are plenty of touts, who will try very hard to get you to part with your money!

One of the main tourist attractions in the area, is Jantar Mantar, which is one of five open-air observatories that were built in the 18th century. There are 13 astronomical instruments on display and it is where astronomical records tables are kept and predications about planet movement made. A visit to the area is not complete without seeing one of the most popular shopping centres, which is a sprawling circular market. The market has everything and anything that you could possibly want well known clothing shops like Adidas, bookstores and music shops plus plenty of cafes and restaurants. There is also a cinema complex. The markets of Janpath and Palika Bazar are also close by and both have a good selection of fashion clothing.

There are many good restaurants situated  in Connaught Place and these range from ones serving traditional Indian foods with large selections of curries, as well as others specialising in European and American foods. All of the restaurants are generally well-priced. Hotels and hostels are found all over the city, with many offering large. clean rooms which range in price from very cheap to very expensive.

Other areas to stay in New Delhi 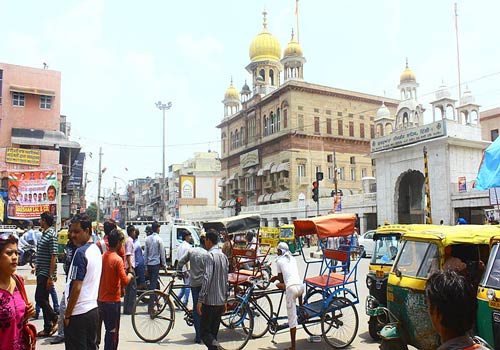 This well-known area, located on the northern side of Delhi is the living reminder of Old Delhi. Just a few hundred metres  from the Old Delhi railway station, Chandni Chowk is the “go-to” place for shopaholics, foodies and those who are looking for a somewhere offering plenty of things to see during their stay in Delhi.

This area has a rich historical background with many famous buildings like the Red Fort (Lal Qila), Fatehpuri Mosque, Mirza Ghalib Haveli, etc. Additionally, it welcomes all religions with open arms, as there you may find the famous St. Stephen's church, Gauri Shankar Temple, Gurudwara Sis Ganj Sahib, and the holy mosque Jama Masjid - all on the same road. The main ways to get around include the metro, e-rickshaws, and auto rickshaws.

Despite having a rather congested atmosphere, it is a famous locality and has been home to many well known personalities. One cannot neglect the pleasure of staying near the street of Paranthe Wale Gali which attracts people from all over Delhi for its famous paratha - a special type of flatbread. 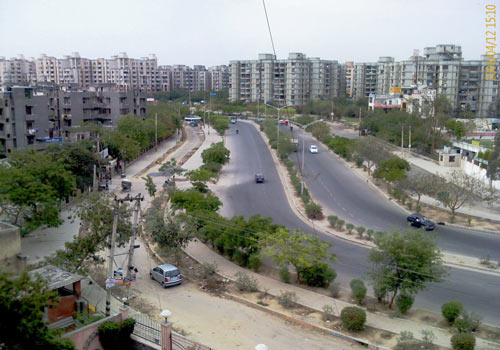 Dwarka, as one of the biggest districts of the city has been witnessing an increasing number of people wanting to live there. It offers easy access to the Airport Expressway and many other routes and because of this, is proving an important attraction.

The bonuses don’t end here. Dwarka is home to many amazing local eateries and food stalls along with large markets which van be easily reached by  rickshaw. So, living there would mean good food, good transport links, and easy access to all the basic essentials-  most of them just around the corner.

It is becoming a well-populated area, where you can find many top brands, good hotels, restaurants, bars, pubs, gyms, and shopping malls. The greenery and infrastructure of this area make it a good place to stay in New Delhi. 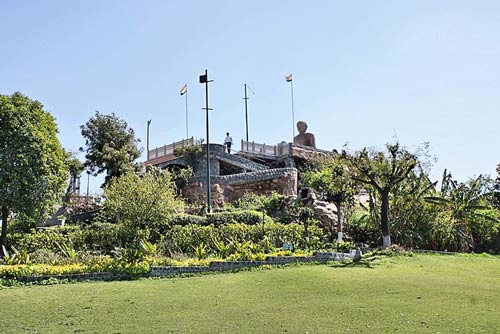 This locality, to the southwest  of Delhi, is known for its relaxed style of living. It is a prosperous area, surrounded by Vasant Kunj, Saket, and Malviya Nagar. This place is known for its safe living conditions and availability of homes.

Transport is good,  because of its easy access to metros, bus routes and numerous rickshaws. As an area with strong historical roots, it attracts many citizens of Delhi. Mehrauli is a well-populated area with most amenities available within a few miles. Many famous schools and colleges are situated in and around this locality.

It is also a good place for housing, for those who enjoy living and spending time near well-managed DDA parks and greenery. One can find all the essentials too, from shopping malls to gyms, saloons, and cafes in this area. 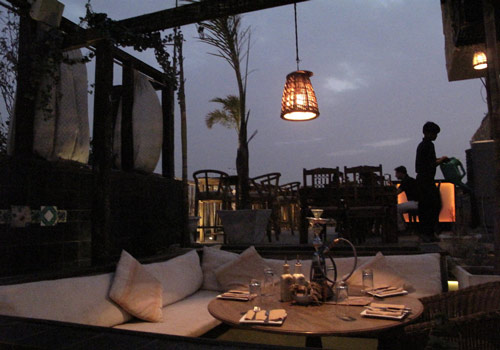 Hauz Khas is a really popular part of New Delhi and is also the centre of creativity,  a café hub for young people and one of the most beautiful and scenic parts of Delhi. This place was originally a residential area of South Delhi and is now known as 'the heart of New Delhi', popular for its art and creativity. The greenery of the deer park and the Hauz Khas fort are attractive features of Hauz Khas. The residential areas are well managed and built. They are not too busy and their ambiance is quiet and relaxing for residents. In contrast, after dark, its nightlife is lively and popular with those who like to party.

The transport facilities include a metro line and auto rickshaws. The upmarket and trending fashion designers have all established their shops here. So, for those looking for a vibrant, highly quality and well- equipped area, it is ideal. 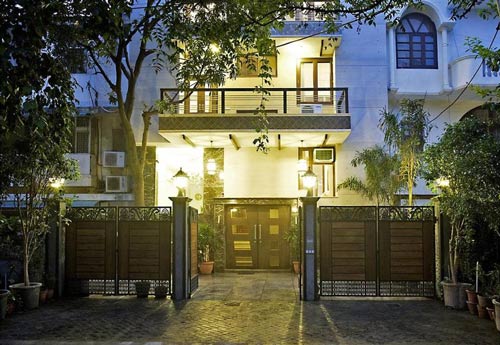 If  you enjoy the finer things in life, Defence colony or - as it is affectionately called by its residents - “Def Col” is definitely the place for you..

Defence Colony was created in the 1960s for veterans of the Indian Armed Forces. Today it is recognised as one of the smartest parts of Delhi with restaurants serving exotic cuisines, smart coffee houses and expensive shops. It is surrounded by well-known areas like Lajpat Nagar, South Ex., Lodhi Road. The major reason to invest there is  that it is a well protected area with properly developed transport facilities.

Metro, buses, auto rickshaws, and e-rickshaws are the popular modes of transport. One may consider the expense of living there to be prohibitive,  but quality comes at a price. True to its reputation, it is one of the best localities to stay in Delhi. 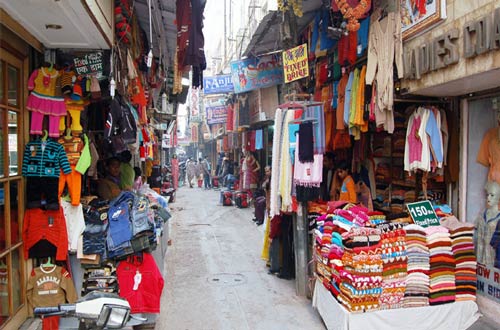 When one thinks of Delhi, it is often of a typical family, sharing chaat, buying highly affordable and fashionable clothing, enjoying the rich culture and of course, the crowded and lively environment.

Karol Bagh is the epitome of this picture. The tightly packed residential area is surrounded by huge branded stores as well as small local shops selling clothing, jewellery, footwear, gift shops, second-hand books, etc. There are numerous places to eat too.

The area is a perfect place to wear out your shoes by simply walking everywhere and soaking up the atmosphere. You can hunt for the perfect outfit and accessories and recharge your batteries at the amazing food outlets and dine-in restaurants.

This is a typical Delhi family place that is safe and has every transport facility needed by its working population. This place is highly affordable and accessible. Mention much be made of the Karol Bagh market that has everything you could possibly want in one place. The market is conveniently close to New Delhi railway station. 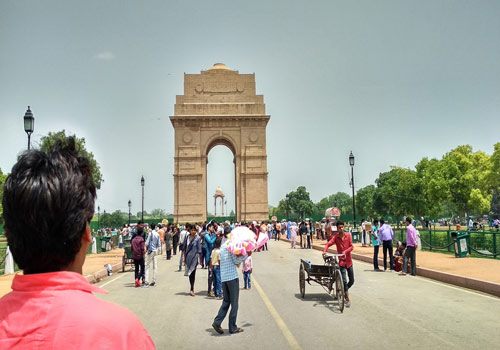 This area lies to the south of Connaught Place and is in the very centre of New Delhi. For many, its main attraction,is the 42 metre high India Gate. This Impressive archway stands in the middle of a roundabout and looks surprisingly like  L'Arc de Triomphe” in Paris.

This sizable monument is dedicated to the 70,000 Indian soldiers who lost their lives fighting alongside the British Army in the First World War. The monument was erected in 1921 and since then there have been other memorials built close to it, including the Amar Jawan Jyoti, which marks India’s independence.

There is an eternal flame, that burns day and night under the arch and this is in memory of the soldiers who died in the Indo-Pakistan War in 1971. This particularly poignant area is extra special at night, as it is lit up with a display of fountains and coloured lights. There are also wide open green spaces for people to sit and have a picnic too. Another place of interest is the National Museum, which has a huge display of arts and handicrafts from all over the country. The most interesting sections featuring the Indus Valley Culture and Buddhist Heritage.

The National Science Centre is a fun for all ages as it is interactive place. There are sections on Indian science and technology as well as DNA science and dinosaurs. There are also several theatres in the area as well as cinemas that have productions in both English and Indian. The restaurants offer a wide range of world cuisines including Chinese, Japanese, Thai and European- as well as traditional Indian.

There are a number of trendy bars and clubs that are situated on the roofs of buildings, in their basements and even beside beautiful swimming pools. The hotels offer some of the best panoramic views of the area. Many of the hotels are luxurious with excellent ratings. 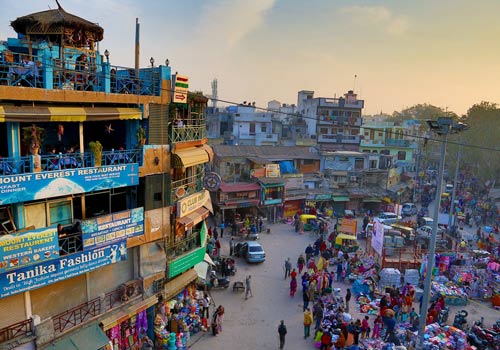 This area is popular with tourists as it has a good selection of affordable hotels, shops and restaurants. The name “Paharganj” means “hilly neighbourhood”. The main attraction is the market, where you can buy all sorts of items from spices, herbs, textiles, handicrafts, fresh produce, clothes and much more. Other things to see in the area include the Qadam Sharif dargah, which is a monument dedicated to the Prophet Mohammed as well as the Qazi Wali Masjid mosque with its beautiful carvings and arched doorways.

The majority of restaurants offer Indian cuisine, but a few other cuisines are also available. These meals are usually exceptionally good value. The most reasonably priced hotels and hostels can be found near the train station.