WHERE TO STAY IN QUEBEC CITY, CANADA 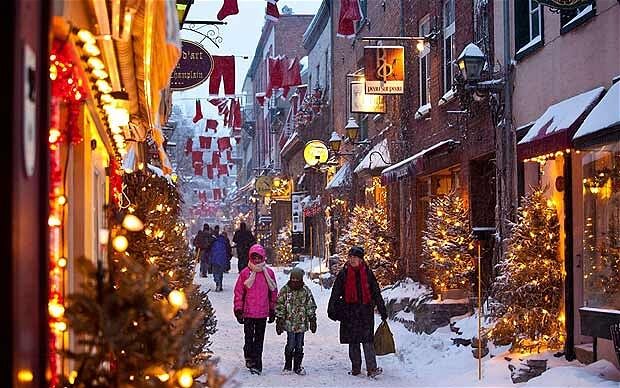 Where is the best area to stay in Quebec City?

Quebec City is a fascinating city from top to toe with everything about it being incredibly diverse from the historic architecture that resembles Europe and unsurprisingly a strong influence from France due to its history, to traditional and modern Canadian and American shops, cafes and restaurants. This predominately French-speaking city is full of character and walking around the city is one of the best things you can do with so many wonderful sights to see that you would miss otherwise on most forms of transport. You are in for a right treat when visiting Quebec City as there are many historical sights, outstanding museums and art galleries as well as unique hotels to stay in, no wonder it has been coined one of the ‘most liveable places’.

By far and away the best area to stay in Quebec City is the Old Town and this is where we recommend due to the amount of major tourist attractions and is where you will find the finest oldest buildings in the city. The area is home to many shops and markets and is one of the most popular areas for nightlife, which has a huge selection of restaurants, bars, clubs and reasonably priced top quality hotels and hostels.

Old Town, the best area to stay in Quebec City 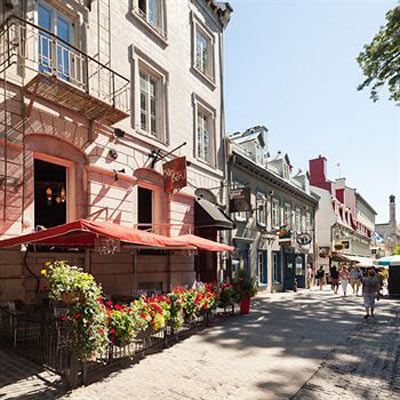 The main tourist district is the Old Town in Quebec City and people are left baffled and amazed by the hundreds of stunning centuries-old buildings, small authentic shops and charming local residents, which gives the place is ultra-friendly appeal. The upper part of the Old Town is surrounded by a stone wall that was built by both the British army and the French army in what is now credited as a UNESCO World Heritage area. One of the most iconic sights in the city is the castle-like Chateau Frontenac, which has claimed to be one of the most photographed hotels on the continent and has been here since the late 19th century.

The hotel is one of the most distinguished buildings in Quebec’s skyline as it was built on top of the hill that overlooks the Saint Lawrence River and has some of the most spectacular views over the city. Obviously you can also stay here but if it is too pricey then second best is to have a guided tour of the hotel and at least come here to see the beauty of the building or for the fantastic views that are on offer. The citadel is another main tourist attraction, which is part of the fortifications of the city and happens to be only one north of Mexico that is a walled city. The citadel was built back in the late 18th century after the Americans attacked British Quebec and is now used as an official residence by both the Monarch of Canada and the Governor General of Canada.

A good time to come here is at 10am when the guards change, which provides excellent photo opportunities. Just below the fortress is the Promenade des Gouverneurs and Dufferin Terrace, which is a boardwalk that provides beautiful strolls and commanding cliff top views. Other things to see include the Morrin Centre, which has been here for the last 200 years and was first used as a prison. The jail cells here are the main highlight and there are guided tours around the centre but do also checkout the only English library in the city that is also housed here.

The Cathedral-Basilica of Notre-Dame de Quebec is one of the oldest of its kind in North America, which was founded in 1647 and resembles the church of Sainte-Genevieve in Paris. The Cathedral is a fine Neo-classical building that is decorated with many significant pieces of art like stained glass windows, paintings and more. The Old Town is where you find some excellent museums like the National Museum of Fine Arts of Quebec, which has around 25,000 items that are mainly produced from the area with some pieces dating back to the 18th century. The museum consists of three pavilions with one being an old prison and another being a library. The Old Town has lots of tourist shops as well as markets dotted around it and these places sell lots of various items including cheap and tasty local produce, leather goods, handmade crafts, clothes and much more.

It is restaurant heaven in this part of the city with many places offering French food but there are plenty of other cuisines like Italian, American, and Indian as well as many others. Bars, jazz clubs and pubs are in abundance in this area with many having outside patios or rooftop gardens, which go down well alongside a local beer or wine. There is no worry over accommodation as there is a huge selection of places to choose from at a range of prices.

Other places to stay in Quebec City

Rest of the City Centre 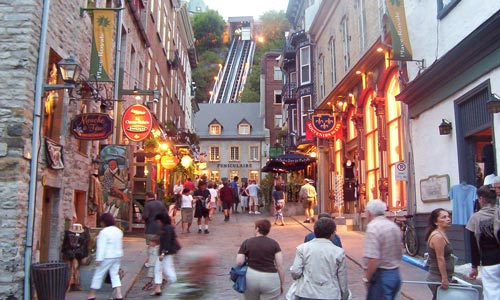 Outside of the Old Town’s walls, there are some other great neighbourhoods to stay in like Saint Roch and the Old Port area, which along with the Old Town, make up the city centre. Saint Roch is a trendy and bustling area with lots of buildings renovated and various walks of life can be found here from artists to businessmen. The centre of the place is where you will find the Saint Roch Church square and is where all the best nightlife happens with a variety of restaurants, bars and hotels on offer. Saint Roch is also home to Abraham Battlefield Park, which is where the British conquered the city and today is used for various leisure activities and public events.

The Old Port is still hyper with activity and has been like this since the 19th century and is one of the world’s biggest ports. It is a popular spot between locals and tourists alike with magnificent views, inviting art galleries, old-school cafes and unique specialist shops as well as a selection of parks and gardens to explore. Close by is the Museum of Civilisation, whcih is an exhibition that is related to humanities and the world’s people and the Museum of America France promotes French culture in the whole of North America.