WHERE TO STAY IN VANCOUVER 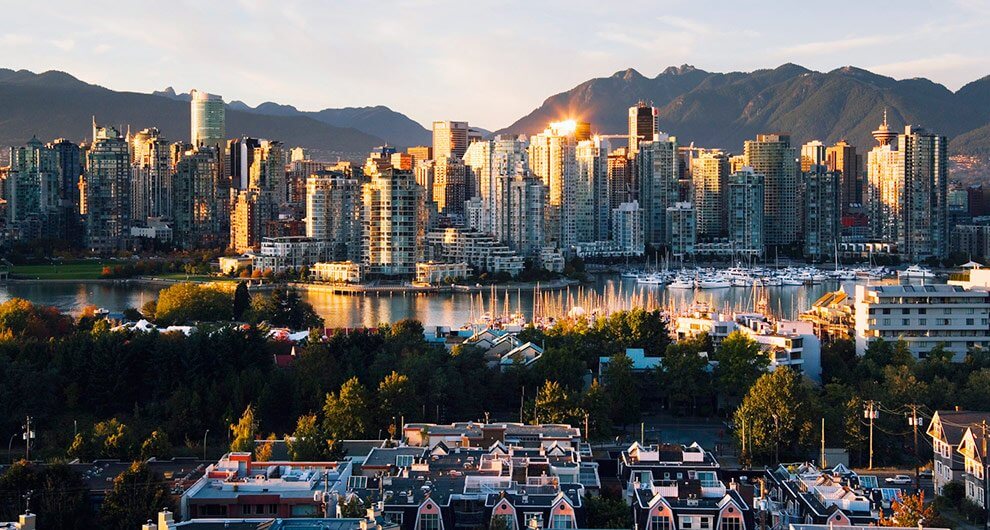 Where is the best area to stay in Vancouver?

Surrounded by mountains and peppered with lush forests, Vancouver is a buzzing metropolis with easy access to nature. Outdoor enthusiasts will love this city, which makes the perfect base for skiing, mountain biking and hiking around the neighbouring snow-capped mountains. In the city itself, enjoy excellent farm produced cuisine with an abundance of fresh seafood. A popular craft beer industry and a thriving local arts scene make the inner city a great place to see and be seen in. Whether you’re strolling through Stanley Park, visiting the galleries and theatres of Granville Island, or enjoying the view from Spanish Banks Beach, you’re sure to enjoy this Canadian city.

If you’re looking to be where the action is, the best area to stay in Vancouver is the Downtown area. Here, you’ll be within the central business district of Robson Square, with plenty of places to eat and drink in the surrounding streets. You’ll also be within walking distance of Gastown, the city’s historic area, and in the other direction, the trendy nightlife of Yaletown. Buses run throughout the Downtown area and you’ll also find plenty of boats in the nearby harbour. 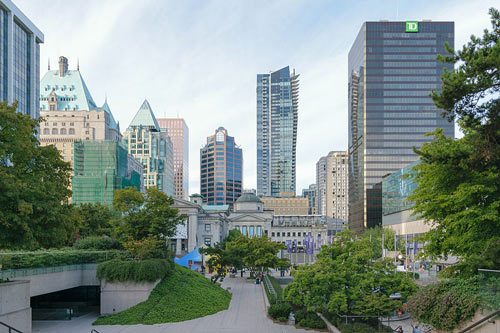 Robson square’s major renovation happened in fairly recent history. Plans were underway in the 1960’s to create a new public square for Vancouver. Much of this is for magnificent display. The “Law Courts” for one were created to personify the ideal of a free and open legal system in Vancouver. The glass structure the “Law Courts” are composed of are meant to represent this transparency of government.

Robson street itself, or as it is known by its counterpart German terminology; “Robonstrasse” is a known European enclave which has emerged since the days of World War Two as an area of European business and immigration and then in turn evolved into one of Vancouver’s most elegant shopping and dining precinct.

What used to be a warehouse district, first established in the 1890’s, this area has been on the move ever since. This area of Vancouver was originally a warehouse district before it morphed into the yuppie business/bohemian art spot hybrid that it is today.

The popular restaurant attraction of, “Coast”, a seafood joint perfectly embodies the existential experience that is Yaletown. This restaurant is located in what used to be an old Warehouse from decades gone by. So imagine a slight industrial feel offset by a light color scheme and modern furnishing and trappings. The menu here is bursting with fresh seafood straight out of the Pacific Ocean. They are famous for their clam chowder with smoked bacon that comes with a side of sour dough bread.

Once you get your seafood fix, head on down to the, “False Creek” waterway. Since the expo of 1986 this has become a destination for travelers from far and abroad. The plaza situated at the waterway is called, “The Plaza of Nations” this plaza was built in 1986 along with the expo headquarters now simply referred to as science world.

Science world is a stunning 17 story high silver dome, this structure is certain to get anyone’s attention and that is precisely why it was built on this water way. Inside the dome are several exhibits ranging from physics to natural history. Most exciting of all though is the science theatre that shows the spectacular, “Over Canada”, this is a life like feature that takes you right to the skies above Canada on a tour hovering over all of the land. The camera view is spectacular and the lifelike immersion obtained by this feature is not to be missed. 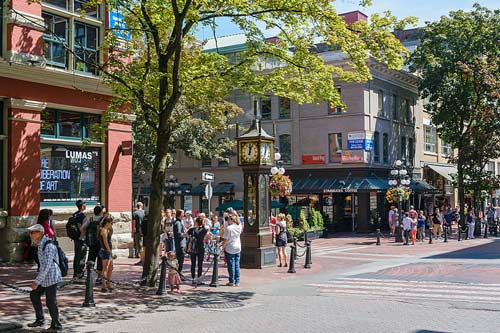 After you get your fill of the panoramic view of Canada in Science World go North East of Yaletown and get a check of the time. In Gastown you can take note of the world’s only original steam clock. It is a giant masterpiece of old world engineering ticking and tocking every day in Vancouver. The thing sets off whistles of steam every fifteen minutes to the tune of Westminster Chimes!

Really quite a site to see, but one you get tired of checking the time there are many other great attractions to get pulled into in this unique and historic district. The design centre is one main pull and there are also very good night clubs, coffee shops and jazz venues to name a few others.

As you make your way through Gastown keep on going east until you finally arrive in Chinatown. The third largest Chinatown in North America, this district has a lot of interesting things to see. As you might imagine this neighborhood features a lot of the aspects of traditional Chinese life. There are great restaurants, cultural shops and attractions. Also oddly enough this area boasts the unusual attraction of having the worlds most narrow building. That’s right the Sam Kee building is renowned because of its oddly shaped 6 feet wide base.

West End, an alternative place to stay in  Vancouver 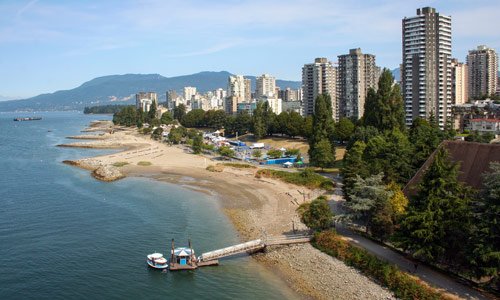 Go west young man! Go west! West of the Central Business district that is; and right into Vancouver’s historic West End. The West End has a much younger feel with most of the residents ranging in age between 20 and 40. There are Café’s and Coffee Shop’s lining every street corner. This location also hosts a beautiful park; 1000 acres is devoted to the famous Stanley Park. It is as famous here as New York’s Central park, but unlike Central Park, this park is a full fledged national reserve, a very interesting site to see.

One Stanley Park tradition that can’t be missed is the lighting of the Christmas Train that takes place every night from late November to Early January. This dazzling light display is a holiday touchtone dear to all Vancouver residents. If you’re in the West End during this time of year, don’t miss the train! The West End is always a very fun and exciting area to stay and is highly recommended as well.