WHERE TO STAY IN SORRENTO 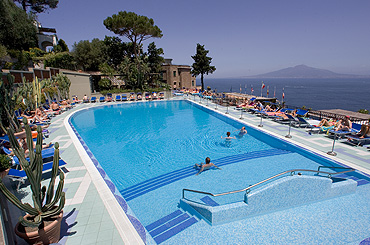 Where is the best place to stay in Sorrento?

Sorrento is a particularly popular tourist destination in Italy, which is set on a plain that wonderfully looks over the Bay of Naples. The town has stunning architecture dotted all around it with history relating it back to the Greeks and the Etruscans and there are many places of worship to explore as well as museums, art galleries and various leisure activities to enjoy.

Mix this with a particular fondness for the English language, traditional trades for purchasing, delicious and healthy foods to try, hotels fit for kings and queens and a base that can be used for excellent transportation links to Naples and Pompeii, it is simply an ideal place to visit.

The best area to stay in Sorrento is the centre, Piazza Tasso, as this area has the highest concentration of luxury and cheap hotels, attractions, pubs, clubs, cafes and restaurants as well as shopping opportunities. From here, you are not far from anything and therefore the town is easy to walk around on foot, which is the best way to see any place. The views are out of this world and the general atmosphere in this area is friendly, inspiring and very welcoming too.

Piazza Tasso, the best area to stay in Sorrento 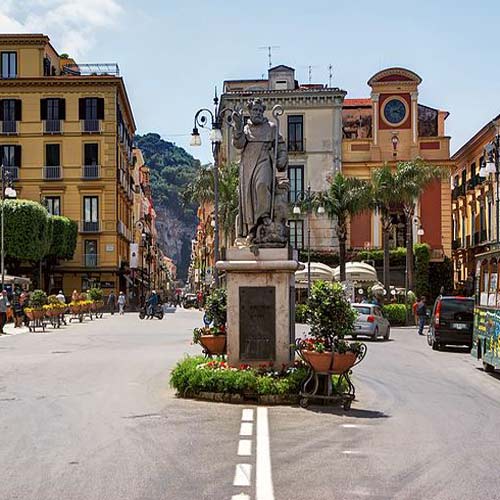 The centre of the town’s life is centred around Piazza Tasso, which is generally high on energy as well as people throughout the day. The town is very safe with this particular neighbourhood being the safest and is also well connected to towns and cities outside of Sorrento. One of the best things about the area is that the streets in the centre are pedestrian only, which make it a relaxing and car hassle free place.

Most streets are lined with cafes, restaurants and shops with some of the most luxury hotels in the country found looking towards the harbour area. The best area for nightlife is Corso Italia, which has modern and traditional bars and clubs that stay open all through the night and promise to make it one to remember. The main sights in Sorrento include the Church of San Francisco, which is one of the most beautiful of its kind with interlaced arches and Arabic portico as well as being surrounded by amazing gardens.

The church also holds various classical concerts from international performers as well as regular art exhibitions. Another must see architectural building is the Cathedral, which was built back in the 15th century and has striking features like the majolica clock, triple-tiered bell tower and the marble bishop’s throne. The cathedral is found on Via Pieta, which is also where a couple of medieval palaces are located too.

Other things to see include the Museo Correale, which is a fantastic museum that has about everything from archaeological findings found in the area to Italian embroidery, clocks, ceramics from around the world, Green and Roman artefacts and even 17th century Neapolitan arts and crafts. The gardens are popular too with rare species of plants and flowers that overlook the mind blowing views of the coastline. There are also various yacht and boat cruises, which set off from the marina, that go along the coastline to remote beaches and nearby islands like Capri and Ischia. You can also walk or rent a bike and head along the coastal footpaths and find a spectacular picnic spot whilst taking in the gorgeous views.

At night, there are a few old traditional cinemas and there is the Teatro Tasso, a music hall, which hosts a variety of Neapolitan classics.

Other neighbourhoods to stay in Sorrento 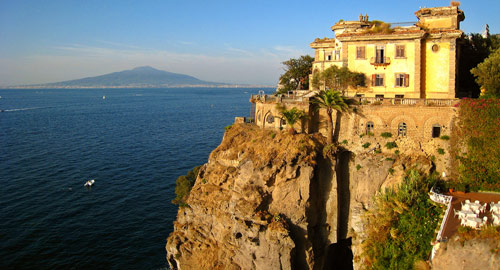 This area is a lot quieter, which has its own train and bus station linking it with Sorrento as well as Pompeii and Naples. Views from the cliffs are just as breathe taking as those seen at Sorrento with the beach area reached by steps or by an escalator. The main area in Sant Agnello is the Piazza Sant’Agnello, which is surrounded by restaurants that serve Italian and other European dishes as well as many traditional bars, shops and hotels that cater for everyone.

One of the major highlights of Sant Agnello is the Capuchin church and monastery, which was built in 1586 and is picturesquely set on top of the cliff with the backdrop of the sparking blue seas beneath it. There are also various parks and gardens, where you can relax and have a picnic as well as looking at the wonderful display of plants and flowers. 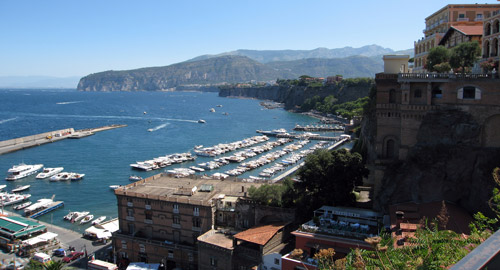 Piano di Sorrento is a bustling and magnificent area, which is well known for its handicrafts and silk garments, which can be purchased in the markets that happen along the main strip on the weekends. The area is easy to get to and from with various public transportation like buses and trains serving it all day and most of the night. Some major features of the area include Villa Fondi, which is an important national monument and the park that it sits in, which is a marvellous space with heaps of Mediterranean vegetation and plants as well as brilliant vista.

You will also find the marina, which is generally busy throughout the day and has plenty of restaurants and hotels to pick from with the Basilica of St Michele Arcangelo being close by that has paintings dating back to the 15th and 16th centuries. There is also a good amount of shops along the main strip, which sell clothes, souvenirs, toys, foods and many other products.