WHERE TO STAY IN TASMANIA 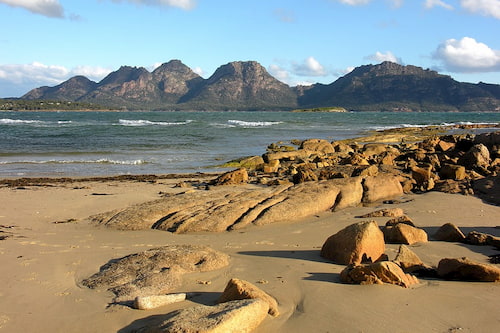 Where are the best places to stay in Tasmania?

Famed for its pristine wilderness areas and convict history, Tasmania has blossomed in recent years as a tourist destination and cultural hub. Outstanding galleries and creative culinary establishments have opened their doors, luring a new generation of adventure seekers to discover what the “Apple Isle” has to offer.

Hobart serves as the vibrant capital and gateway to the south, with Mount Wellington/Kunanyi looming above and one of the best spots to see the Southern Lights. A short drive from the city will see you in the charming village of Richmond, an ideal base for both history buffs and foodies wanting to discover the gastronomic delights of the Coal River Valley.

If you can’t handle the chilly winter temperatures in the south, head north to Tassie’s second city, Launceston, to explore the Tamar Valley wine-growing region or continue to the artistic port of Burnie. St Helens is the gateway to the stunning beaches and coastal walks of the East Coast, which is at its most majestic during the summer months, while the wild landscapes of the West Coast can be explored from the harbour-front village of Strahan.

Best cities and towns to stay in Tasmania 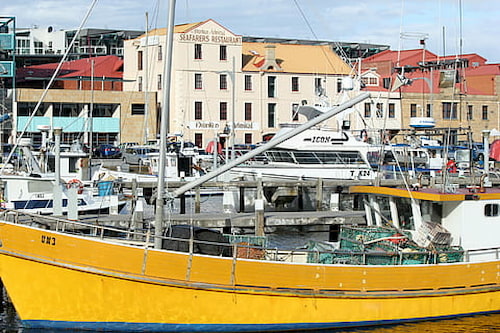 Situated at the entrance to the Derwent River and backed by the iconic peak of Mount Wellington/Kunanyi, Hobart is most visitors’ first introduction to the state. It boasts exceptional cafes and restaurants clustered around its picturesque harbour, as well as plenty of fascinating museums where you can delve into everything from the region’s maritime history to contemporary art.

Hobart serves as a base for exploring the rugged landscapes of the Tasman Peninsula and the Port Arthur Historic Site, as well as the photogenic waterfalls of Mount Field National Park. You can get your shopping fix at the legendary Salamanca Market on Saturdays or head to the Sunday Farm Gate Market, a locals favourite featuring fresh and artisan produce. The capital also boasts the most diverse choice of accommodation in the state - from budget backpackers to luxury, boutique hotels - and a bustling nightlife centred around the bars and clubs of Salamanca. 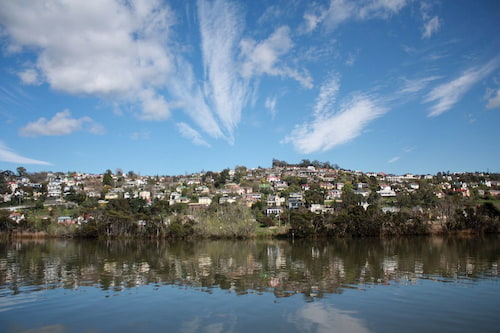 As Tasmania’s second-largest city, Launceston serves as the state’s northern hub, with its elegant colonial and Victorian buildings home to a wide choice of hotels, gourmet restaurants, museums, and art galleries. The nightlife if lively thanks to a large student population, with cozy wine bars and craft beer joints if you’re after something more sophisticated. On Saturdays, you can head to the Harvest Launceston Community Farmers Market to pick up handmade cheeses, slow-roasted coffee, and locally-grown produce, then enjoy a slice of wilderness just a short stroll from the city centre at the Cataract Gorge.

Launceston is the gateway to the Tamar Valley wine growing region where you can sample some of the island’s cool-climate varietals, as well as several historic villages that include Longford and Evandale. It can also be used as a base for getting up close to Tasmania’s unique wildlife in Narawntapu National Park or hitting the ski slopes of Ben Lomond during the winter months.

Perched on the edge of Tasmania’s World Heritage-listed Southwest Wilderness, Strahan is a harbour-side village with a fascinating convict history. It’s located at one end of the West Coast Wilderness Railway, as well as being the launching point for cruises along the pristine Gordon River, which meanders between old-growth rainforests and past historic logging settlements. For the wild at heart, there are long stretches of windswept beaches backed by huge sand dunes just a short drive away.

Many of Strahan’s historic cottages have been transformed into B&Bs where you can overnight and there’s a small grocery store for picking up self-catering supplies. Dining options are limited to a handful of harbour-front restaurants, cafes, and a bakery. Strahan is one of the wettest settlements in Tassie, so come prepared for rain!

With a rich industrial past, Burnie is a port city on Tasmania’s north coast that’s reinventing itself as a creative hub. It’s home to galleries, workshops, and studios where you can meet the makers, as well as several impressive examples of Art Deco architecture. There’s a good choice of accommodation in the city to meet all budgets, as well as dining establishments that range from beachside cafes to seafood restaurants.

Scenic drives hug the coastline both east and west of Burnie, accessing some of Tassie’s most picturesque countryside, while several waterfalls lie just a stone’s throw inland. You’ll find plenty of shops and supermarkets if you’re self-catering, as well as a handful of nightlife options that range from laid-back pubs to nightclubs and an iconic distillery. 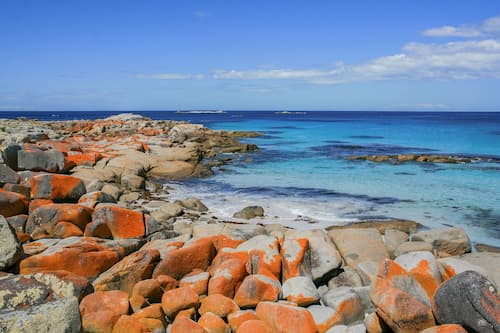 Overlooking Georges Bay, St Helens is the largest town on Tasmania’s northeast coast and is an ideal base for exploring the surrounding coastline and national parks during the mild summer months. It offers a wide choice of self-contained units and B&Bs where you can bunk down for the night, as well as restaurants serving freshly caught seafood.

While the shops and services of laid-back St Helens offer everything you need, it’s what lies just beyond the town that’s the main draw for visitors. A few kilometres north is Binalong Bay and the Bay of Fires - a stunning stretch of beaches and coves that are renowned for their crystal clear waters and lichen-covered granite boulders. Fishing cruises and dive trips also depart from St Helen’s busy port, offering incredible encounters with Tasmania’s impressive kelp forests and unique marine life. 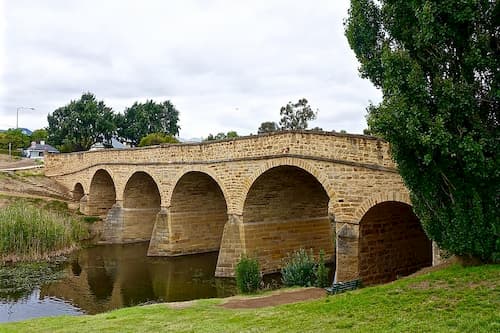 Nestled in the Coal River Valley wine-growing region, Richmond is a sleepy village that boasts Australia’s oldest bridge and its oldest gaol. Its main street is lined with 19th-century residences that are now home to antique stores and cafes, with the village a hive of activity when the day-trippers arrive from Hobart.

But it’s well worth overnighting in one of the charming B&Bs to experience Richmond outside of its “peak” hours and wander through the peaceful backstreets to discover the village’s stately churches. It’s not a destination for nightlife, however, with few options aside from the village’s one pub. Richmond’s proximity to the Hobart Airport makes it a good place to stay at the beginning or end of your visit to Tasmania.