WHERE TO STAY IN OSAKA 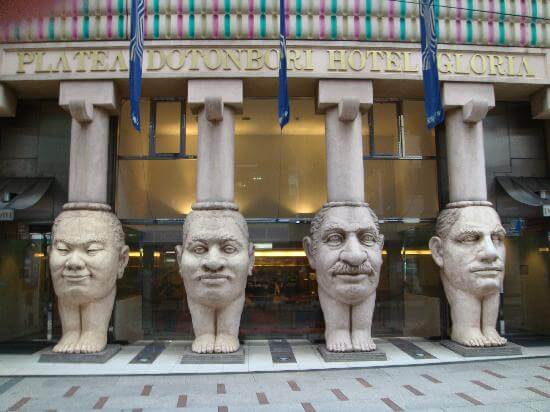 Where is the best place to stay in Osaka?

This thriving and popular harbour city is the largest of its kind in West Japan, which is known all over the world as the “kitchen of the nation”. This is because of the Osaki people and their obsession with food, which is helped out by what feels like millions of food stalls and restaurants on every street and corner. The city is also very famous for its castle, along with historical temples, ample shopping opportunities, various amusement areas and has one of the best nightlife’s in the country. There is always something to find and do in the city, which makes this place one of the most appealing on the planet.

If you’re wondering where to stay in Osaka, the best area to stay is Namba district, due to its brilliant location, which is right in the heart of the commercial and cultural centre of the city. This is also the main transportation hub and therefore is exceptionally easy to find and the area is home to a decent number of tourist attractions, hotels, pubs, bars, clubs, restaurants and shopping streets. Namba is particularly authentic in terms of Japanese culture, which is why it is one of the most popular places to stay in Osaka.

Namba, the best area to stay in Osaka 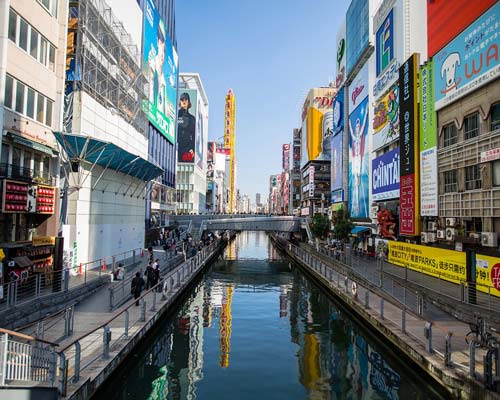 The area of Namba is a spectacular place that ticks all the boxes that stereotype Japan with the streets covered in neon, which highlight people’s businesses and services as well as karaoke rooms, DVD places, cinemas and numerous shopping centres and malls. This bustling and energised tourist area is what gives the city its authenticity and is one of the most popular places for entertainment and shopping purposes, which it makes it the perfect place to stay in.

There are some excellent tourist attractions to check out in Namba, including the Museum of History, which does exactly as it says and that is displaying the city’s history by showcasing objects and items including works of art, photos and past products. Another interesting museum is the Kamigata Ukiyoe Museum, which focuses on Japanese woodblock prints called ‘Ukiyoe’ and is a surprisingly impressive place to visit. Other things to see and do are Shin-Kabuki-za, which is a theatre that features many comedians as does Grand Kagetsu theatre and is one of the biggest performance halls in the area and hosts local comedians as well as internationally-acclaimed ones.

All around Namba Station, you will find many shops and malls like Takashimaya department store that sell anything from electronics to jewellery and food and is where you could easily explore for a few days. The same streets around Namba Station also have the highest concentration of restaurants, pubs and clubs, which offer a great variety of tastes that gets the thumbs up from any tourist. A five-minute walk in any direction from the station will bring you to a whole load of hotels and hostels, where you will find cheap and cheerful places to some of the most expensive in Osaka.

Other areas to stay in Osaka 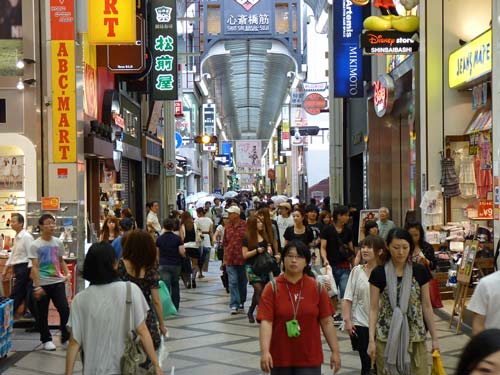 The Shinsaibashi area is the largest shopping area in the city with the main street being Mido-suji street, which connects from Kita in the north to downtown Minami and Namba districts. Due to the huge selection of shops in the area, there is no wonder that so many tourists make their way to Shinsaibashi or just stay in the area. The shops consist of reasonably priced items, which sell a diverse range of things from fashion, games, jewellery, beauty products, souvenirs and much more.

Along with shops just on the street, there are various large department stores and the area is divided into a few specific areas including American Village, which is where lots of young people hang out and explore the many American brands. Also, there is another area called European Village and this is centred around Suomachi-suji street, which is a complete contrast to the American Village as it is usually much quieter and elegant looking. The European Village contains European brands as expected but has themed features like British style streetlamps and typical London-type buildings as well as the odd red phone box. The neighbourhood is surrounded by restaurants too and there are many cuisines that have to be tried including traditional Japanese, Korean, Chinese, Thai, European and American.

There are also an adequate number of pubs, clubs and hotels that appeal to every budget conscious traveller. The area is well connected too, so you can get from the airport as well as train to Shinsaibushi easily and to other places like tourist attractions and is known as a very safe place for visitors. 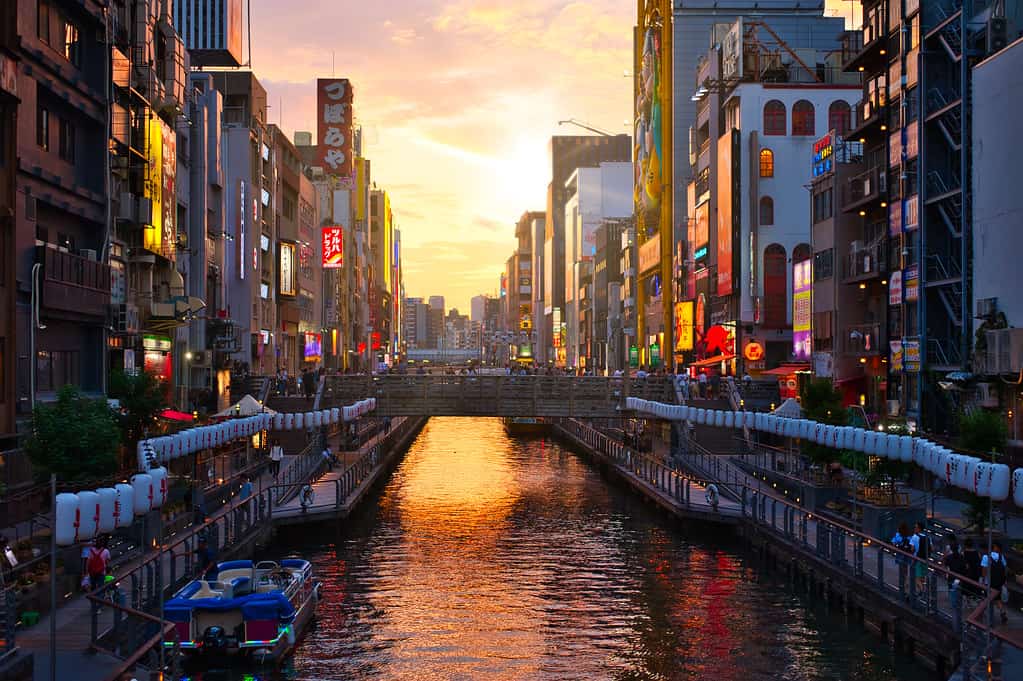 Dōtonbori’s reputation as a top entertainment and nightlife district within Osaka has made it a popular destination for visitors and Osaka citizens alike. Illuminated signs light up the skies at night creating a unique atmosphere. It was home to theatre as early as the mid-17th Centuryand although the early theatres have gone, cafes and restaurants had catered for visitors and a huge variety of cuisine is still available.

Overall Dotonbori is a great area to stay with accommodation choices varying from hostels to apartment rentals and quality hotels. Transport links within the City are excellent with metro linking all neighbourhoods. The Airport is an hour away via metro and the Haruka Express train while the famous bullet train service links with other major Japanese cities.

Glico Man, a huge illuminated sign of an athlete a stand-out landmark. Kuidaore Taro, associated with sumo wrestling and the KaniDōraku crab in front of the restaurant specialising in crab are two other famous signs. Enjoy a river cruise, pay a visit to Universal Studios or perhaps take the short trip to the famous Osaka Castle while there are plenty of retail opportunities as well; there is always something to do in Dotonbori. 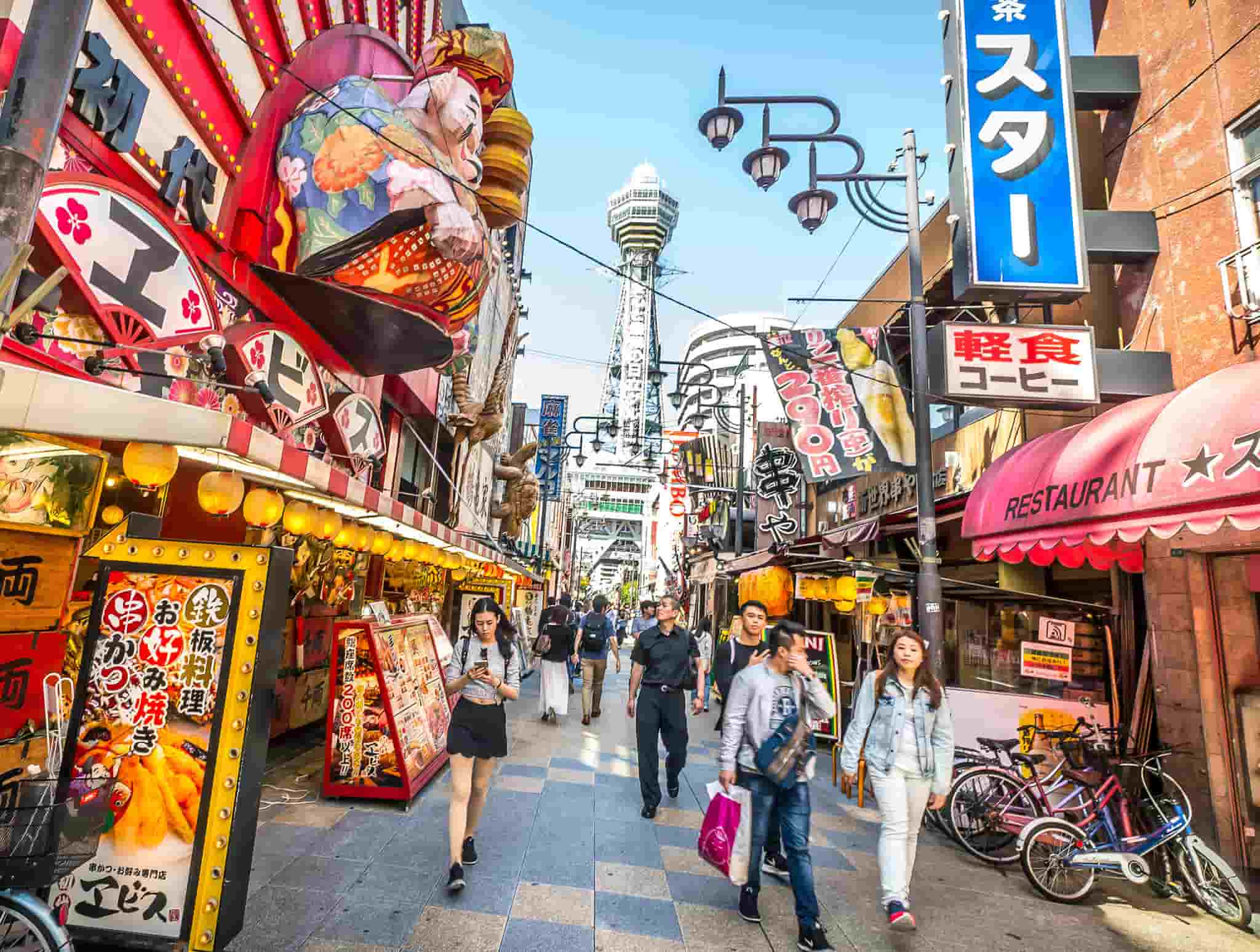 Agricultural land deep into the second half of the 19th Century, Umeda was ‘’reclaimed’’ in order to build Osaka’s first station that remains the City’s most important terminus although the Station is much-changed. Umeda is now a major commercial centre with an infrastructure offering shopping and entertainment. Grand Front Mall is the first place for shoppers to visit.

The underground metro means its links to the rest of Osaka are excellent while overland, Osaka has high speed trains to major centres such as Kyoto and Kobe from that terminus.

Not surprisingly, with such good transport links, Umeda has good accommodation alternatives and is a nice neighbourhood to stay for those visiting Osaka. There are plenty of places to eat, some offering fast food but many others the finest dining available in the whole of Osaka.

Apart from the vibrant nightlife and great shopping, the highlights of Umeda include the HEP 5Ferris Wheel and the Sky Building from which there are great views over the city and nearby Kobe. Ohatsu Tenjin, officially Tetsu-no-Tenjinsha, is a local shrine with a 1,000 years of history, some of it tragic. Pokémon fans, children and grown-up kids should head to the Umeda Daimaru Department Store,13th Floor; they will be in paradise.